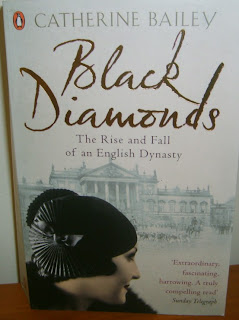 The black diamond of the title is coal. This is the story of the Fitzwilliam family of Wentworth House in Yorkshire, one of the wealthiest aristocratic families in England in the early 20th century. It’s the story of how the family’s lives were intimately connected with the coal mines they owned & the miners they employed. It’s also the story of the family’s spectacular fall from grace so that by the 1950s, the last two male heirs were in the courts disputing the legitimacy of one of them. The book opens with the funeral of the 6th Earl Fitzwilliam in 1902. He was one of the richest men in the country, but the pomp & ritual of his funeral was marred by the fact that virtually none of the family were speaking to his grandson, Billy, the new Earl, because they believed him to be an imposter. Billy’s father, Lord Milton, son of the 6th Earl was epileptic. This carried a terrible stigma of mental instability in the 19th century. Milton was sent out to the United States as he was seen as an embarrassment to the family. He took his young family with him & while they were in Canada, his son & heir, Billy, was born. Milton’s parents had done everything they could to prevent him marrying, even to the extent of telling potential brides of the “taint” of his epilepsy. When he did marry & have a family, his father was horrified &, after Milton’s early death, rumours spread that, in the wilds of North America, a boy had been substituted for the female child actually born. In 1902, the family decided not to go to court to settle the question. They were far more frightened of scandal than the thought of an illegitimate Earl. The story of the Fitzwilliams is full of stories like this. It’s also a story of contrasts. George V paid a visit to Wentworth House in 1912 when discontent in the North was worsening. He wanted to see the conditions of the mines for himself & even took a tour underground. At the time the royal party was at Wentworth, two explosions ripped through the Cadeby Main colliery, not far away. The first explosion killed dozens of men. The second explosion killed many of the rescuers who had volunteered to try to reach the trapped men. This is the most effective part of the book. The story alternates between the eyewitness accounts of the disaster & the reactions of the King & Queen, the local community & the whole country. The contrast between the party at Wentworth House, where there were eight sittings of dinner for the servants according to their rank in the household, & the poverty of the miners & their families is compelling. The Fitzwilliams were one of the more enlightened mine owners. They hadn’t employed a company to run their mines, they oversaw them closely & their employees were well looked after by the standards of the time. Safety was paramount, unlike most other mines which were run for profit & the miners were expendable. This is not just another story of aristocratic goings-on. The servants, miners & their families are just as much a part of the story as the aristocrats. Catherine Bailey has done a remarkable job of piecing together the story of the Fitzwilliams, especially as they destroyed practically all their personal papers. Often only one stray letter or piece of evidence remains for her to reveal the truth of the many scandals in the family’s past. It’s an impressive work of detection.
Posted by lyn at 9:57 PM