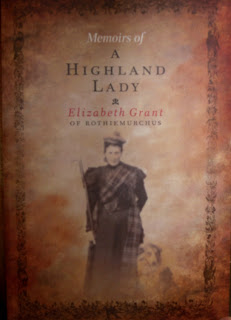 Memoirs of a Highland Lady is the story of Eliza Grant’s life as a member of a Scottish family of landowners with a much-loved estate at Rothiemurchus. Eliza’s memoirs were written to amuse her children in the mid 19th century & she often addresses them directly while telling her stories. The Memoirs were not published until the 1890s when they were an immediate success. The book has never been out of print but this edition by Andrew Tod is the first complete edition running to nearly 700pp.

Eliza was born in 1797. Her childhood was spent between Rothiemurchus, Edinburgh & London. Her father, Sir John Peter Grant, was a lawyer & politician, loving to his family but wildly extravagant & pretty useless with money. Eliza adored her father but, in her middle age, she was quite aware of his failings. Her mother, Jane, is a sterner figure. She seems to have kept herself fairly aloof from her children & Eliza was never a favourite. Eliza loved her brothers William & Johnny & her sisters, Jane & Mary & the book is a very complete account of their childhood. The excitement of being at Rothiemurchus, the awful nurses & governesses they endured, the games they played & the servants & neighbours they loved or loathed. Eliza’s recall is amazing as she had no diaries to refer to. Her love of Scotland is obvious in every word she writes & the book has the feel of direct speech that’s been recorded by someone sitting beside her,

In after years I did not fail in admiration of our northern Capital, but at this period (1809) I can’t remember any feeling about Inverness except the pleasure of getting out of it, while at Forres all the impressions were vivid because agreeable; that is I, the perceiver, was in a fitter frame of mind for perceiving. How many travellers, ay, thinkers, judges, should we sift in this way, to get at the truth of their relations. On a bilious day, Authours must write very tragically.

Eliza’s spelling has been left intact when it doesn’t interfere with the sense & that’s part of the charm of the narrative. So she writes of arithmetick, puritanick, bachelours, burthens & skreens. Her neighbours & family are legion & I soon gave up the attempt to work out which Grant was which, apart from the immediate family. One of the most moving scenes is the funeral of old Captain Grant when every custom was scrupulously observed,

A great crowd was gathered in and about the house; the name of each new arrival was carried in immediately to Mrs Grant, who bowed her head in approbation; the more that came the higher the compliment. She said nothing, however, she had a serious part to play – the highland Widow, and most decorously she went through it... She sat on the Captain’s cornered arm chair in a spare bedroom, dressed in a black gown... Motionless the Widow sat during the whole length of the day, silent and motionless. If addressed she either slowly nodded or waved her head, or, if an answer were indispensible, whispered it... They passed along the passage to the death chamber, where on trestles stood the Coffin, uncovered as yet, and with the face exposed. The Widow took her calm last look, she then raised a small square bit of linen, probably put there by herself for the purpose, and dropping it over the countenance, turned and walked away. 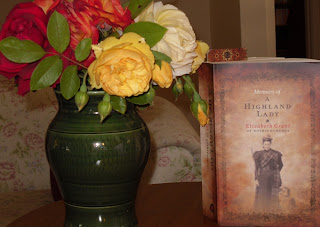 When Eliza was 17, her first love affair ended sadly. Her coming out had been a time of great excitement for her. She loved the new dresses, the dances & the feeling that she was quite a success, to her own surprise as she suffered greatly from shyness. She had become friendly with a young man (he’s never named), a friend of her brother’s & his sisters. Eliza’s parents had no idea how far their friendship had grown & were horrified when they announced that they were in love. The match should have been unexceptionable, they were well-matched socially & financially. But, the fathers had a mysterious long-standing feud & neither would accept the other’s child into their family. The lovers held out for some time, corresponding in secret & trying to convince their parents that they would wait forever to be together. Eventually, Eliza is convinced by his mother that she would never be accepted into the family & she agrees to give up the attachment. The young man continues to write & try to see her but she refuses to see him & eventually he gives up. The regret with which she writes of this nearly 40 years later shows what an effect it had on her,


It is with pain, the most extreme pain, that I even now in my old age revert to this unhappy passage of my youth. I was wrong; my own version of my tale will prove my errours; but at the same time I was wronged –ay, and more sinned against than sinning... Therefore, with as much fairness as can be expected from feelings deeply wounded and ill understood, I will recall the short romance which changed all things in life to me.


There are also passages that wouldn’t be out of place in a novel by Jane Austen such as this account of a visit by the Goodchild family when the Grants were living in Edinburgh,

Still we were not prepared for the storming party by which we were assaulted; six daughters, I think, the father, mother, and two sons. The girls, all in coloured cotton frocks, close coarse cottage bonnets, thick shoes, talking loud in sharp Durham voices, chose to walk about to see the town... They were quite at their ease in the streets, gloves off or on, bonnets untied for the heat, shop windows inspected, remarks of all sorts made, George Carr perpetrating his usual series of misdemeanours with a gay effrontery unparalleled. Jane and I deputed to escort the assemblage, rejoiced we had so few acquaintances left in town, the lawyers only remaining for the summer.

As the family financial situation grows more precarious they spend more & more time at Rothiemurchus to economise. Brother William takes over the running of the estate & Eliza & her sister, Mary, do the housekeeping & sell stories to magazines. Their fortunes are saved by Eliza’s father being offered a Judgeship in India & the family set sail.

Eliza’s descriptions of the voyage & Bombay society are wonderful. She is interested in everything & everyone & her descriptions of the scenery & climate are vivid. There she meets Colonel Smith who all her acquaintance have decided will be just the man for her. Unusually this turns out to be nothing less than the truth. They marry in India & Eliza blossoms into a loving & industrious wife & housekeeper, free at last to run her own house. The Colonel’s health is not good & on advice from his doctors, they reluctantly decide that they must leave India. The Colonel has recently inherited an Irish estate, Baltiboys, from a bachelor brother & the Smiths set sail for their new life. 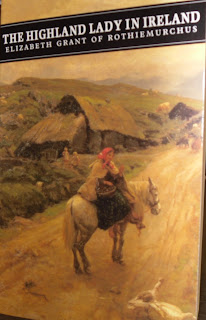 I enjoyed Eliza’s Memoirs so much that I’m tempted to go straight on to The Highland Lady in Ireland, the journal Eliza kept from her arrival in Ireland in 1840. I’m not quite ready to stop listening to her enchanting voice.
Posted by lyn at 1:50 PM