Lives of the Queens of England - Agnes Strickland 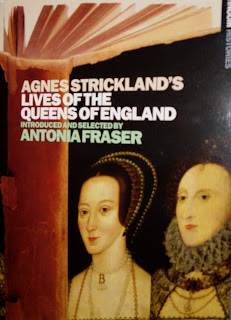 I remember dipping into a complete set of Agnes Strickland’s Lives of the Queens of England at a local library years ago. I’d always heard of these books, they were in the bibliography of every royal biography I think I ever read as well as historical novels like those of Jean Plaidy & Hilda Lewis. I regret not reading them all from cover to cover so I was pleased to come across this book which is part of a series called Continuum Histories. Edited by Mark Bostridge (biographer of Vera Brittain & Florence Nightingale) it’s a series of extracts from famous historical works, selected & introduced by a modern historian. This volume has an Introduction by Antonia Fraser.

The Lives were actually the work of Agnes Strickland & her retiring sister, Elizabeth. The Stricklands were a remarkable family – another sister was Susanna Moodie, who emigrated with her family to Canada & wrote the classic book of pioneer life, Roughing it in the Bush. Agnes & Elizabeth were pioneers themselves in their use of primary documents & the meticulous way they conducted their research. Many of the documents they used had barely been sorted or catalogued so their work was an amazing effort in the mid 19th century. Their books were widely popular. Other titles included the Lives of the Tudor Princesses, Lives of the Stuart Princesses & Lives of the Bachelor Kings of England (a shortlived series because they discovered there were very few unmarried Kings!). They wrote readable, exciting romantic history underpinned by meticulous research. Agnes was the extrovert, enjoying her fame & the social opportunities it brought. Elizabeth was satisfied with her role as researcher & writer, very happy to be absent from the title page.

This volume contains extracts from the lives of Anne Boleyn & Elizabeth I. The fall of Anne Boleyn is told in vivid detail & the author’s sympathy for her subject is obvious. A little Victorian moralising creeps in as Strickland admonishes Anne for triumphing in the death of Katharine of Aragon,

When the long-expected tidings of Katharine’s death arrived, Anne, in the blindness of her exultation, exclaimed, ‘Now I am, indeed, a queen!’... On the day of her royal rival’s funeral she not only disobeyed the king’s order, which required black to be worn on that day, but violated good taste and good feeling alike by appearing in yellow, and making her ladies do the same. The change in Henry’s feelings towards Anne may, in all probability, be attributed to the disgust cause by the indelicacy of her triumph.

I’m afraid I can’t agree with Strickland’s conclusion there. I don’t think Henry had any such finer feelings. By the time of Anne’s trial & execution, however, Strickland portrays her with more sympathy. She believes in Anne’s innocence of the charges of adultery & treason brought against her but blames Cromwell rather than Henry for her downfall. As Anne walks to the scaffold, Strickland’s feelings are obvious,

There also was the ungrateful blacksmith-secretary of state, Cromwell: who, though he had been chiefly indebted to her patronage for his present greatness, had shewn no disposition to succour her in her adversity. The fact was, his son and heir was married to the sister of Jane Seymour, Henry’s bride-elect, and the climbing parvenu was one of the parties most interested in the fall of queen Anne... Anne must have been perfectly aware of his motives, but she accorded him and the other reptilia of the privy council the mercy of her silence when she met them on the scaffold.

The other extract concerns Elizabeth I & the death of Mary, Queen of Scots. Strickland’s sympathies are with Mary here & she castigates Elizabeth for her unjust imprisonment of Mary & her undignified machinations in trying to avoid the responsibility for putting her to death. Her language here is gloriously over the top. I can understand why the books were so popular, they read like a novel compared with the drier, more cautious history writing of the time,

Her ministers pursued a systematic course of espionage and treachery, in order to discover the friends of the unfortunate Mary; and when discovered, omitted no means, however base, by which they might be brought under the penalty of treason. The sacrifice of human life was appalling; the violation of all moral and divine restrictions of conscience more melancholy still. Scaffolds streamed with blood; the pestilential gaols were crowded with victims, the greater portion of whom died of fever or famine, unpitied and unrecorded, save in the annals of private families.

Strickland tells the familiar story of the Babington plot when Walsingham’s spies & agents provocateurs facilitated the correspondence that led to Mary implicating herself in a plot to assassinate Elizabeth. Elizabeth is reluctant to sign the death warrant after Mary is tried & found guilty. She asks Mary’s jailer, Sir Amyas Paulet, to poison Mary secretly & when he indignantly refuses, she signs the warrant & then blames her secretary, Davison, for acting on it. Elizabeth wanted Mary dead but didn’t want to be the agent of her death. After the execution,

This dark chapter of the annals of the maiden monarch closed with the farce of her assuming the office of chief mourner, at the funeral of her royal victim, when the mangled remains of Mary Stuart, after being permitted to lie unburied, and neglected for six months, were, at last, interred, with regal pomp, in Peterborough Cathedral, attended by a train of nobles, and ladies of the highest rank, in the English court.

I enjoyed this taste of Strickland’s Lives very much. The Strickland sisters’ dedication to original research & the sources they discovered led to a renewed interest in history among readers. They were often writing the first biographies of some of the more obscure medieval queens. They were determined to gain access to libraries where women were barred & they often succeeded. Their fame led to offers of help from European scholars & libraries where they were able to research the lives of widowed queens such as Catherine of Braganza who retired to their native countries. They also travelled to many of the places associated with their subjects & discovered local stories & legends that might otherwise have been lost. Agnes & Elizabeth Strickland were literary pioneers & I’m pleased to be able to have a taste of their great work.
Posted by lyn at 7:17 AM