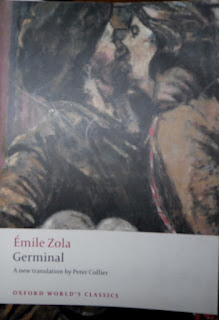 Germinal is the story of a mining community in 19th century France. It's a story of the effects of poverty & degradation on generations of workers & their families. It's also the story of an idealistic young man who encourages the workers to go on strike & witnesses the battle played out between the workers & the bosses.

Étienne Lantier is an unemployed mechanic. He's tramping the countryside looking for work & is almost at his last gasp when he reaches Le Voreux, a coal mine near Montsou. He stops to warm his hands at a brazier & gets into conversation with Bonnemort, an old man who has worked as a miner & now a driver. There's no work for mechanics but Étienne is taken on as a miner. He becomes part of Maheu's crew. Maheu, his wife, La Maheude, & their children, Zacharie, Catherine, Jeanlin, Lenore, Henri, Alzire & the baby Estelle live in village Two Hundred and Forty. It's part of the dehumanizing of the miners that their villages have numbers instead of proper names. Maheu & his older children work in the mine, the children as soon as they're considered old enough at 12 or 13.

From our first glimpse of the family we can see how their poverty defines & constricts their lives. Although five of the family are working (Bonnemort is Maheu's father), they struggle to make ends meet. La Maheude has no money for food & it's six days before payday. The eldest son, Zacherie, & his girlfriend, Philoméne, already have two children but La Maheude doesn't want them to marry & set up house together because that would mean losing Zacharie's wages. Catherine, at nearly 15, still hasn't started puberty because of malnutrition & the hard physical work of being a tram girl in the mine. She is being pursued by the brutish Chaval, & although she resists him, she seems resigned to her future. Working in the mine until she gets pregnant, then relying on her man's wages to support her & the children that will inevitably follow. Alzire is crippled & makes herself useful in the house. Jeanlin is a criminal in the making as leader of his group of friends, stealing & vandalising. Maheu is a respected worker but the mine's managers continue to squeeze the workers to maximize profits for the shareholders.

Étienne's first day as a miner is described in claustrophobic detail. The journey down into the hot, airless mine, the two kilometre walk from the bottom of the shaft to the seam where the team is working. The backbreaking physical labour & all for starvation wages. Étienne boards at the Maheu's house & is attracted to Catherine although he's too diffident to act on his feelings, even when he realises that she returns them. He is disgusted by Chaval's relentless pursuit of Catherine & the two men become rivals in every sense. Étienne's friendship with Rasseneur & Souvarine introduces him to socialist ideas &, when the Company announce a new pay rate that will, in effect, be a pay cut, the workers, encouraged & led by Étienne, go on strike.

The strike is the central act that brings the workers together. Everyone works together to force the Company to agree to their terms at first but, as time drags on & the small relief fund they've saved is spent, divisions open up between families & friends as some of the workers go back to the pit. The Company brings in Belgian workers & soldiers to protect them & guard the mine & a confrontation is inevitable as the Company refuse to back down & the miners become desperate.

Germinal is an absorbing, compelling & shocking novel. The Maheus & the other families in the village are trapped in a cycle of poverty. Their children have no education, no prospects other than working in the mine. The girls are sexually exploited almost as soon as they start work &, when they fall pregnant, can only hope that their lover will marry them & bring home enough money to keep body & soul together. Bonnemort has worked all his life & now that he's old, barely able to stand & coughing up black phlegm, the Company are quibbling about his pension. La Maheude is forced to ask the local gentry for charity when she has no food in the house & they offer her clothes instead of bread or money. The women in the village, at home with young children, spend their days gossipping viciously about each other. The men struggle to provide for their families & turn to drink, gambling & crime.

There are no heroes in the book, only ordinary people struggling to make a living but defeated by their poverty. Étienne's journey from novice miner to fully committed activist to disillusionment & ostracism is the central journey of the book. The Maheus, especially La Maheude & Catherine, are deeply sympathetic characters. Their suffering is hard to witness & from the moment the troops are brought in, there can be no happy ending for the strikers.

Germinal is a remarkable novel. Every time I read one of Zola's novels I'm struck again by the contrast between English & French fiction of the period. Zola's frankness about sex & violence can't be matched by any English author of the period. Germinal was published in 1885 & I can't think of an English novel that can compare with it. Hardy, Gissing & George Moore were struggling against the power of the circulating libraries at the same time & mostly being burned by them. The sensation novelists had pushed the boundaries of what was acceptable in fiction but their stories don't have the shocking realism of Zola & Balzac. I have several more of Zola's novels on the tbr shelves & I'm looking forward to reading more of his work.