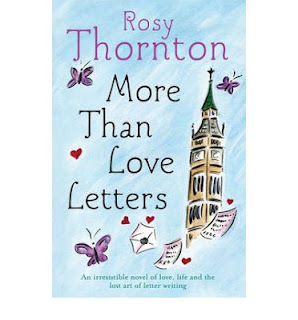 This is Rosy Thornton's first novel, published in 2006, & it has all the humour & romance that make her novels so much fun to read. More than Love Letters is an epistolary novel, quite an unusual choice for a first novel in the 21st century. As well as letters, there are emails, newspaper articles, minutes of the meetings of WITCH (Women of Ipswich Together Combating Homelessness) & extracts from Hansard.

The main correspondence is between Margaret Hayton, a 24 year old teacher & her MP, Richard Slater. Margaret writes to Richard about the VAT on sanitary towels, the missing zipwire at the local playground & the lack of bins for dog waste at the local park. Richard thinks she's a pest, an old woman with a fixation on dog faeces, & sends her form letters in reply. Richard is a discontented MP, out of favour because of his opposition to the Iraq War, & desperate to find some way back into the Leader's good books. His friend & fellow MP, Michael Carragan, is on hand to offer advice & a drink. Michael advises Richard to get himself in the news on an important issue. Once Richard meets Margaret at a Constituency surgery though, he suddenly decides that the tax on sanitary towels is the most important issue of the moment.

Margaret is a passionate & socially minded young woman. She's just moved to Ipswich where she lodges with Cora whose husband works on an oil rig. Margaret immediately gets involved in WITCH, a collective running a women's refuge. She writes long emails to her best friend Becs, a teacher in the North who's working her way through the alphabet looking for the perfect man. Margaret also writes long letters to her Gran, who's recovering from a stroke & has trouble getting to the phone in time. Through Margaret's letters we meet the other members of WITCH. Alison, super-organised & competent; Pat & Pat, a lesbian couple who hope to be able to marry; Susan, Ding & Persephone. The women at the refuge are escaping from violent husbands & abusive fathers & the collective support the residents as well as previous residents who still need their help.

Margaret & Richard's relationship begins with misconceptions & continues with some comic misunderstandings as well as many moments of real connection. Richard is immediately attracted to Margaret when they meet but she believes that his sudden interest in dog litter bins & children's playground equipment is a sign that he has a social conscience. Their correspondence with each other remains on a businesslike level while Margaret's emails to Becs & Richard's to Michael tell a more romantic story. Richard agrees to help Nasreen, an Albanian refugee seeking asylum who's staying at the refuge, & this is when his self-serving attempts to impress Margaret become more serious & he stops playing at being an MP & starts taking his job seriously. When Nasreen disappears, Margaret & Richard are drawn together in the search for her.

There are parallels with Elizabeth Gaskell's novel, North & South, in More than Love Letters. Margaret shares the heroine's name & she's also the daughter of a vicar. Both Margarets have a social conscience & they have an influence on the social consciences of the men they love. Gaskell's novel is mentioned several times & Margaret is a lover of 19th century fiction, a love she shares with her grandmother. The warm, loving relationship between Margaret & her grandmother is very touching. Gran gives Margaret all the love that seems to be missing from her relationship with her parents, too busy with parish concerns.

Margaret's kindness touches everyone, from her landlady, Cora, who plants a garden for the women's refuge & starts taking herbalism courses, to Helen, a young woman at the refuge who relies on Margaret for support. There are tragedies as well as humour in the book & the story is involving from the beginning. More than Love Letters is a romantic story with a serious undercurrent. A Condition of England novel for the 21st century as the novels of Elizabeth Gaskell were in the 19th.
Posted by lyn at 2:52 AM