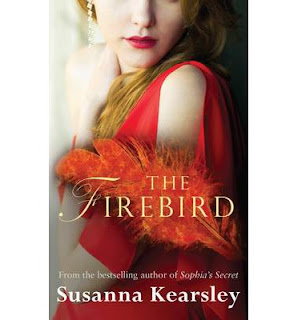 Nicola Marter has a gift. When she holds an object, she can connect with the people who have owned it in the past. Nicola is an expert in Russian art & works in a London gallery. When Margaret Ross brings in a wooden carving of the Russian fairy tale creature, the firebird, Nicola feels an immediate connection to someone called Anna who once owned the object. Margaret's family believed that the firebird was given to their ancestor, Anna, by Empress Catherine, widow of Peter the Great, in the early 18th century. Margaret wants to sell the carving but, without provenance, this will be difficult. Nicola can see how important the sale is to Margaret & she feels compelled to try & trace the history of the firebird.

Nicola has ambivalent feelings about her gift of psychometry. Her family discouraged her from talking about it & she feels embarrassed & defensive about it. Her Russian grandfather was persecuted by the Soviets because of it. When studying in Edinburgh, Nicola had taken part in scientific tests conducted by a parapsychology institute. She met Rob McMorran, who accepts his psychic gifts as just a part of who he is. Nicola & Rob's relationship ended abruptly when Nicola left Edinburgh without explanation & returned to London,. Now, Nicola knows that she needs Rob's help if she is going to trace the firebird. Rob is a policeman, living in Eyemouth near the Scottish border. He & Nicola had always shared a deep bond, even reading each other's thoughts & communicating without speech so he's not surprised by her arrival. Rob is able to see the past & agrees to help Nicola in her quest.

The search for the firebird takes them from Slaines Castle on the coast near Aberdeen to Belgium & on to Russia. They discover Anna Moray as a child, cared for by the Logans after her parents were forced to leave Scotland because of their involvement with the unsuccessful Jacobite rebellion of 1715. Anna is taken to a Belgian convent by her great-uncle, Colonel Graeme & then, after a terrifying encounter in Calais, Anna is taken on to St Petersburg by Vice Admiral Gordon. Gordon is one of the many Scots who were forced to leave their homeland after fighting for King James. Anna becomes his ward & grows up as part of his family & as part of the Jacobite community in Russia. Peter the Great was sympathetic to King James & gave material help & support to the King as he plotted his return to the throne.

When Anna is seventeen, she agrees to stay with the family of General Lacy as companion to his pregnant wife. The General won favour from the Tsar through his bravery at the Battle of Poltava against Sweden & he is a central figure in the expatriate community. Through General Lacy she meets his kinsman, Edmund O'Connor, an Irishman who has been exiled from home because of his Jacobite sympathies. Anna's story is immensely touching. Her longing for family & her careful awareness of the danger of knowledge makes her self-contained & wary. She is also proud of her family although she can never speak of them. Finally, as Anna's story comes to a close, we discover how she acquired the firebird, the fairytale creature who started the quest. I was very moved by the conclusion of Anna's story.

If you've read Susanna Kearsley's earlier books, you will find echoes of two of her books in The Firebird. As a boy, Rob had helped a group of archaeologists searching for the missing Roman Ninth Legion & his story was told in The Shadowy Horses. The story of Anna's parents was central to The Winter Sea, another of my favourite Susanna Kearsley books. Reading The Firebird brought both of these books back to me. There were so many lovely touches. Rob still talks to the Sentinel & Nicola hears the shadowy horses when she stays with Rob's parents. I loved revisiting Slaines Castle & remembering both earlier books. Nicola & Rob's relationship is beautifully romantic but almost understated & I found the psychic elements of the story fascinating. Susanna Kearsley writes contemporary & historical fiction equally well & it was a delight to follow Anna's story as Rob describes it to Nicola, whose own psychic gifts become stronger once she acknowledges that it's an important part of her being. Anna & Nicola have a lot in common. Their characters are both self-contained & reluctant to trust their own instincts. Both women must find a way past their self-imposed restrictions before they can find happiness.

As if the incredibly satisfying & emotional ending of both stories in the 18th & 21st centuries wasn't enough, Susanna Kearsley has also provided a fascinating essay on the research she did when writing the novel.  Russian history has been one of my interests ever since I read two books when I was a teenager - The Youngest Lady-in-Waiting by Mara Kay & Robert K Massie's Nicholas & Alexandra. Since then, I've read many books about Russian history so walking through 18th century St Petersburg in my imagination was just wonderful. Scotland & its history is another interest so a book that combined both was almost too good to be true. Most of the 18th century characters are real & there is documentary evidence for their actions & motives. I loved reading about the process of research, something that always fascinates me. I'm so glad that Colonel Graeme, a character from The Winter Sea wouldn't let go of Susanna Kearsley's imagination & inspired her to write this completely involving story.
Posted by lyn at 2:07 AM