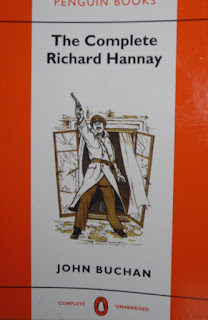 Serendipity has led me to another book from the tbr shelves. I follow mystery writer Kerry Greenwood on Facebook & she mentioned that she thought John Buchan was an excellent novelist, much better than his contemporaries, & that Mr Standfast was the best war novel & The Three Hostages the best detective story. I have the Penguin Complete Richard Hannay on the tbr shelves so I immediately started reading Mr Standfast & it was certainly an exhilarating ride.

Richard Hannay - soldier, spy catcher, detective - is John Buchan's most famous character. He first appears in The Thirty-Nine Steps, a book that has been adapted for film & television many times since it was published in 1915. Most of the adaptations depart from the book quite a bit I've never understood why film makers do this. (Don't ever get me started on the latest Miss Marple travesties!) so I'd recommend that you read the book first so that at least you can see what they've changed. I've also read Greenmantle, the next Hannay adventure, & Mr Standfast is the third.

Mr Standfast was published in 1919 & the action takes place during WWI. Hannay has been serving with his regiment on the Western Front when he is suddenly summoned home by the War Office & given an important mission that will take him out of the front line for a while. He's not particularly happy about this & even less happy when he realises that his role will be as an anti-war peace activist. His old Intelligence boss, Bullivant, sends him off to stay at Fosse Manor near Isham to get a lead on a very dangerous man, Moxon Ivery - or at least, that's what he calls himself. Hannay has assumed his old alias, Cornelius Brand, & while at Fosse Manor, he meets Mary Lamington & falls instantly in love. Mary, however, isn't just the token love interest. She's part of Bullivant's intelligence network & is a bright, resourceful young woman who has a crucial part to play in the narrative.

Ivery is posing as one of the anti-war crowd but in reality he's a German spy sending intelligence back to Berlin through an elaborate network of informants & rendezvous in remote locations. I won't even try to describe Hannay's adventures which include dodging the police in the wilds of Scotland after getting himself involved with industrial politics in Glasgow, being trapped in a cage in an impregnable cellar in Switzerland (he shoots his way out of that one in a very surprising way) & trekking over an Alpine pass in the middle of winter in six hours. He even finds himself taking over as director of a war film & using his abilities as a commander of men to foil his pursuers. Every escapade is breathtaking & because the narrative is in the first person, we're right there with Hannay as he makes his discoveries & escapes from his enemies. In between, Hannay returns to his regiment in France & even comes across a lead on Moxon & his cronies at a chateau in Picardy.

Hannay's old friends from previous adventures are much in evidence. Blenkiron, the brash American engineer, is now high up in the Intelligence Service & he's the one who explains the background to Hannay & pulls strings for him. Peter Pienaar has joined the Royal Flying Corps & is having a wonderful time as a crack pilot until he is shot down, badly wounded & taken prisoner. The final confrontation between Hannay & Ivery (who reveals himself as the Graf von Schwabing) is a classic standoff between good & evil, highlighted by the fact that Ivery is also in love with Mary (who had been nursing in France) & planning to kidnap her & take her back to Germany. He hasn't counted on the resourcefulness of either Hannay or Mary & his eventual fate is poetic justice.

The title refers to a character in Bunyan's Pilgrim's Progress & the book is referred to many times by Hannay, Peter & Mary. Peter in particular becomes absorbed in Bunyan & the Bible during his imprisonment as he comes to terms with his injuries. His badly damaged leg means that he will never fly again. Peter is repatriated to Switzerland & that's where he meets up with Hannay. The scenes between the two old friends are very moving. I have to wonder though whether George Lucas had Peter in mind when he wrote the final scenes of the first Star Wars movie.  I was reminded of those scenes very strongly.

Mr Standfast is the kind of novel that you race through without getting too bogged down in detail. So much happens so quickly that it's impossible to work it all out anyway. Buchan is always at home in Scotland & these scenes were the most vivid. The Scots characters like Andrew Amos & Geordie Hamilton just leap off the page with their humour & impenetrable dialect. I enjoyed reading Mr Standfast very much & I look forward to reading the last two Hannay novels, The Three Hostages & The Island of Sheep, very soon.
Posted by lyn at 2:18 AM