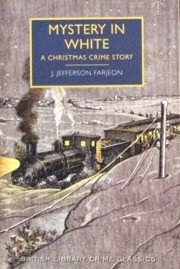 Mystery in White is another in the terrific series of Golden Age mysteries that the British Library are reprinting. Appropriately for the time of year, it's set at Christmas & is a very clever variation on the locked room mystery.

A group of travelers are caught on a snowbound train on Christmas Eve. Lydia Carrington & her brother David are on their way to stay with friends, Jessie Noyes is a chorus girl going to Manchester for a job, elderly Mr Edward Maltby is a psychic researcher investigating a possible sighting of the ghost of Charles I. There's also a timid clerk, Thomson, who likes to fantasise about rescuing maidens in distress & a bore (later we discover his name is Hopkins) who has a story for every occasion, always with himself as hero.

As the storm worsens & there seems no likelihood of the train moving, the group discuss their options - to stay put or to try to reach another station & take a train from there. Suddenly Mr Maltby takes off after seeing a man running from the train. eventually, the others, except Hopkins, decide to follow him, concerned for his welfare & also hoping to complete their journeys. After losing their way & Jessie twisting her ankle, they stumble upon a house. The door is unlocked, fires are lit, the kettle's boiling & tea has been set. However, there's no one home.

Hopkins, who brings news of the murder of a man in the next compartment to theirs on the train & Maltby, who has lost sight of the man he was pursuing, soon join the group. They decide to make the best of it & hope the owners of the house will be understanding when they return. However, the empty house has an uncanny atmosphere & the arrival of a menacing Cockney who says his name is Smith, doesn't exactly lighten the mood. Jessie seems to be receptive to the strange atmosphere of the house & is frightened by a chair in the dining room & the bed she is put into. David & Mr Maltby try to find some clue to the disappearance of the owners but everything they discover only deepens the mystery.

"Nothing explains anything! If it were a fine day it might be quite natural to run out of a house for a few moments while a kettle's boiling, but in this weather - can you explain that? Where have they gone? Not to post a letter or to cut a lettuce! Why don't they come back? I didn't tell you, the kettle wasn't boiling in a nice respectable manner, it was boiling over. Oh, and there was a bread-knife on the floor."

Mystery in White is an atmospheric mystery that is very hard to put down once started. The claustrophobic atmosphere of the house with the snow falling & the menace within is exceptionally well done. I don't find it at all hard to believe that it's been a surprise bestseller. The mystery is ingenious, reaching back twenty years into the past & involves several murders & family secrets. The characters are interestingly varied & there are moments of real tension as David & Maltby test their theories about the mystery of the abandoned house.
Posted by lyn at 1:51 AM