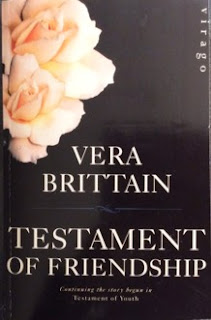 A few weeks ago I read John Forster's biography of Charles Dickens & one of the things I loved most about it was that Forster & Dickens were friends & he brought all his personal knowledge of Dickens to the biography. Vera Brittain's biography of Winifred Holtby is also the story of their friendship. I first read this book over 20 years ago &, as it's 80 years since the death of Holtby this month, I wanted to read it again.

Winifred was born in 1898, the daughter of a farming family in Yorkshire. Her schooldays were unremarkable, the most memorable event was being caught up in the Zeppelin raid over Scarborough during the War. Her family life was happy. Her father, David, ran the farm & her mother, Alice, eventually became the first female County Councilor in the East Riding, an achievement Winifred was very proud of. She based Mrs Beddows in her novel South Riding on her mother. In the last year of the War, Winifred joined the WAACs & helped to run a hostel in France for a Signals unit. It was at Huchenneville that she met her lifelong friend Jean McWilliam. Jean later emigrated to South Africa & their correspondence was published as Letters to a Friend.

Vera & Winifred met at Oxford after WWI. On the surface, they were unlikely friends. Vera had nursed throughout the War, had lost her fiancé, her brother & two close friends. She returned to Oxford bruised & exhausted by her experiences. Winifred's war had been quite different. Too young to join up until almost the end, she had lost no one close to her. Physically they were quite different. Winifred was tall, blonde, gregarious & outgoing. Vera was small, dark, pretty & intense. They first met during History tutorials & clashed over a debate where Vera felt ambushed by Winifred & the other students who hadn't suffered as she had done. Eventually though, they became friends &, when they graduated, decided to live together in London to pursue their dream of becoming writers.

Winifred's first novel, Anderby Wold, was accepted for publication & she was also in demand as a teacher. She was careful never to accept a full-time teaching post because she knew that writing & journalism was what she wanted to do. Vera & Winifred also became involved in the League of Nations Union (the precursor of the United Nations) & did a lot of lecturing for the cause of peace in Europe. Winifred's life was so full of commitments that it's exhausting to read. She became involved in encouraging Trade Unionism in South Africa after she spent five months touring & lecturing there; she wrote for the feminist journal, Time and Tide, & became a member of the Board; she continued tutoring & lecturing for the causes of peace & feminism that she felt so strongly about & she kept writing fiction. She was always disappointed in the results because she felt she was never able to satisfactorily carry out her original inspiration.

Winifred also spent a considerable amount of time supporting friends & family. She was an integral part of the household when Vera married Gordon Catlin in 1925 & helped to look after the children & encourage Vera in her work, especially when she was writing Testament of Youth. Family responsibilities also took her back to Yorkshire & she supported many friends both emotionally & financially when she could. She was always in demand as a lecturer & reviewer & her own needs often took second place. When she was at Oxford, so many friends came to her rooms to talk about their problems or just as a meeting place that she often had to go to the library to study, leaving them in possession. This exemplifies Winifred's unselfishness but also highlights one of the downsides of her nature. She was so busy supporting other people that her own needs often went unrecognised. She had never been strong & when her health began to fail, she was eventually diagnosed with kidney disease. She died in September 1935 at the age of just 37.

Testament of Friendship is such an interesting book on many levels. On one level, it's the story of a woman who was loved by everyone, almost a saint in her unselfish devotion to other people. It's the story of a life cut short by illness & of potential unrealized. On another level, this is as much a book about Vera as it is about Winifred. Even the title of the book links it to her own Testament of Youth. Vera's motives for writing the book have been much analysed. She states in the Prologue that she wanted to write a book about female friendship, a relationship that has not been celebrated as male friendship has been through the centuries. She wanted to celebrate a friendship that had saved her sanity after the losses of the War & maybe wanted to atone for her own feelings of guilt over taking advantage of Winifred's good nature. There's definitely an element of guilt here but there's also a feeling of proprietorship over Winifred's life that upset Alice Holtby & Winifred's other friends. Vera was Winifred's literary executor & saw South Riding through the Press after her death, even though Mrs Holtby didn't want it published.

Vera even gave Winifred a love story, a romance that, in reality, was so tenuous as to hardly exist. Was this because she wanted to show that Winifred had been a "normal" woman (far from the rumours of lesbianism & ménage a trois that circulated about Winifred, Vera & Gordon) or was it from a feeling of guilt that the demands of Vera, her family & friends prevented Winifred ever having time for a life of her own? After reading Testament of Friendship, I went back to Vera's diaries of the 1930s (published as Chronicle of Friendship) & read the entries for Winifred's last days. I was astonished all over again at how Vera stage-managed a death-bed proposal of marriage from the man she calls Bill in the biography at a time when Winifred was so ill that she could hardly see or recognize anyone. In the biography, this is presented as the touching end to a lifelong romance.

I loved the way the book opens, with a conscious imitation of the way Elizabeth Gaskell begins her Life of Charlotte Brontë. The pilgrimage to a Yorkshire village, recreating the steps of the literary pilgrim through the village to the churchyard where Winifred's grave lies. It's a beautiful piece of writing, the descriptions of nature & the countryside are just gorgeous & she ends with a description of the grave & the explicit comparison of Winifred with Charlotte Brontë. When I reread Testament of Youth earlier this year I noticed how often Vera prefigures the end of her story all the way through. She does this again here. I also loved all the details of Winifred's journalistic career & her work with Lady Rhondda, owner of Time and Tide. The quotations from Winifred's letters bring her to life with all her good humour & self-deprecation.

One of the lingering questions in a biography of a woman who died so young is, what might she have done differently if she'd known that she would die at 37? Would she have concentrated on her fiction? Would she have been more ruthless about the encroachments of others? Somehow I don't think she would. She was ill for several years before her death &, apart from her determination to finish South Riding, she kept on as she always had - supporting her friends, even going on holiday with Vera & her children when she was obviously not well so that Vera would be able to keep believing that she would recover. Testament of Friendship isn't the whole story of Winifred Holtby (Marion Shaw's The Clear Stream is an excellent modern biography) just as Forster's Life of Dickens isn't the whole story of Charles Dickens. Both books, however, are invaluable for the personal insights they give into the lives of their subjects.

Copies of many of the books mentioned in this post can be found at Anglophile Books.
Posted by lyn at 2:50 AM