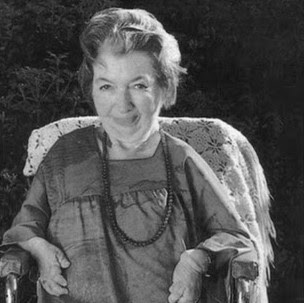 Blue Remembered Hills is Rosemary Sutcliff’s childhood memoir. It’s a beautifully written story of a lonely child crippled by juvenile arthritis who nevertheless didn’t feel she had had a deprived life. The tone of the book is one of gratitude for life’s blessings & joy at the natural world, her friends, her dogs & her love for her parents. She was born in 1920. Her father was a naval officer, her mother a mercurial woman who, Sutcliff believes, probably had a form of manic depression. Because of her father’s long absences at sea, & her illness, Rosemary & her mother were very close. Their relationship was a difficult one because Mrs Sutcliff was so over-protective of her daughter & so consumed by her disability, that she was reluctant to allow anyone else in. Rosemary was taught at home except for a couple of experiences at school. The first school left her with a love of learning but unable to read. She didn’t learn to read for a long time. Her mother loved to read to Rosemary & she loved to listen so she was reluctant to learn herself as she would much rather listen to Dickens read aloud to her than reading John & Betty-type readers to herself. Eventually, she did learn to read at the second, more conventional school & nothing could stop her after that. Treatments & operations to alleviate her arthritis meant Rosemary spent long periods in hospitals & nursing homes but there’s no self-pity in her descriptions of the pain & loneliness she endured. Parents were only allowed to visit once a week & the children spent the whole visiting time eating the food brought by their families. The food in hospitals was scarce & the children lived for the weekly feast. They had to eat as much as possible during visiting hours because any food left afterwards was confiscated. It’s hard to imagine such draconian rules for sick children. What happened to the children whose families lived too far away to visit or couldn’t afford to bring food? All the treatments didn’t seem to help Rosemary very much as she was only able to walk short distances & spent most of her adult life in a wheelchair. Her mother was determined that she would walk & encouraged her to exercise as much as possible & it was only after her mother’s death that Rosemary’s father agreed that she should have a wheelchair. Her mother had seen a wheelchair as defeat; Rosemary saw it as freedom. The first thing she did was take her father on a holiday as she was finally able to get around with comfort. Although Rosemary’s life was made very difficult by her mother’s mood swings, she writes of her with honesty & love. Her love for her father is much more uncomplicated. He & Rosemary obviously spent quite a bit of time tiptoeing around Mother, enduring the bad times & hoping for sunny times ahead. He was obviously proud of her later success as a writer because in his old age he would say, “Once, Rosemary Sutcliff used to be my daughter; but I’m Rosemary Sutcliff’s father now.” Rosemary went to art school & reluctantly became a painter of miniatures – reluctantly because her heart was never really in it but it was considered a lady-like profession. Her teachers didn’t think she would be able to handle the physical demands of a career as a painter in oils. After an unhappy love affair in her twenties, she began writing. She wrote a series of retellings of Celtic myths & legends &, although this was rejected, OUP said they would be interested in a retelling of the Robin Hood stories. She also began what became her first published book, The Queen Elizabeth Story, the story of Elizabeth I written for children. Blue Remembered Hills ends with the publication of this first book. The memoir was first published in 1983 & my copy is a Slightly Foxed edition, part of a beautiful series of limited edition reprints by the literary journal Slightly Foxed which I wrote about here. It was the first of the series & according to the website it's still available, but I’m sure it’s also available secondhand or in libraries. I wish Rosemary Sutcliff had written another book about her adult life & career. This was a joy to read, full of humour & honesty about herself & her family.
Posted by lyn at 12:10 PM