Murder by the sea - Lesley Cookman 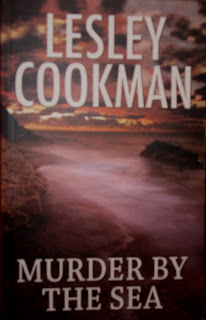 Lesley Cookman has written a series of mysteries set in the English village of Steeple Martin featuring Libby Sarjeant, actress & artist & her friend, Fran Castle, whose psychic talents have been useful to the police in previous enquiries. Libby is incorrigibly nosy & very bossy, she can’t stay away from a mystery. Fran is much quieter, more unsure of herself & her abilities. She used to work for a real estate agent, using her psychic talents to investigate properties for potential buyers. She has now inherited Coastguard Cottage in the seaside town of Nethergate & is in a very tentative relationship with local gallery owner, Guy. Both women are middle-aged & not particularly thin or gorgeous, a touch of reality which is unusual these days. Although maybe there’s a new trend beginning as Ruth Galloway in Elly Griffith’s The Janus stone, which I reviewed last week, isn’t thin & gorgeous either.

Libby & Fran become involved in another mystery when a body is dumped on a small island in Nethergate Bay. A local reporter, Jane Maurice, has heard of Fran’s involvement in previous investigations & wants to interview her. Fran refuses but once Libby hears of the body practically on Fran’s doorstep, we know she will have little choice but to get involved. Jane was on the local tourist boat when the body was discovered & is desperate to investigate. She’s only lived in the area a short time after inheriting her aunt’s house & has discovered how difficult it can be as an outsider in a small town. Libby & Fran take pity on her & become involved in her life, especially when Libby starts trying to make a match between Jane & her handsome tenant, Terry.

The murder investigation uncovers a scam involving illegal farm workers & people using false passports. Fran also has flashes of a past event when she visits Jane’s house & feels that the murder could somehow be connected with the house. Libby’s research reveals that Jane’s aunt worked for MI5 during the war & was involved with Simon Madderling, a notorious Fascist spy who has recently been revealed as a double agent working for the Allies & not a traitor after all. Could there be something hidden in the house that explains Fran’s intuition? When the house is burgled & Terry is attacked, it looks as though there is something sinister going on. Could Jane’s new tenant, Mike, be involved? Is Jane being completely honest with Libby & Fran?

This is a fast-paced novel with an interesting cast of characters. I especially enjoyed Fran’s materialistic daughter, Chrissie & her dreadful husband, Bruce. I admit to liking Fran quite a bit more than Libby. Fran does at least begin to assert herself in this book & actually tells Libby to back off a couple of times. Still, if Libby weren’t so incredibly pushy, the plot would never move along. There are a lot of threads to the story & Cookman does a good job of bringing them all together at the end.
Posted by lyn at 6:30 PM