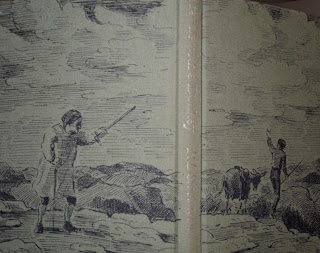 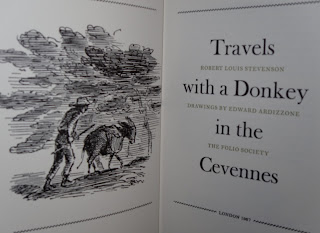 Robert Louis Stevenson set out for a fortnight’s travelling through the Cevennes region of France. The book he wrote about the journey is called Travels with a Donkey because the donkey, Modestine, is a source of exasperation & companionship during his journey. Stevenson began his journey in Velay, where he has a “sleeping sack” of his own design made up,

This child of my invention was nearly six feet square, exclusive of two triangular flaps to serve as a pillow by night & as the top & bottom of the sack by day. I call it ‘the sack’ but it was never a sack by more than courtesy; only a sort of long roll or sausage, green waterproof cart-cloth without & blue sheep’s fur within. It was commodious as a valise, warm & dry as a bed... I could bury myself in it up to the neck; for my head I trusted to a fur cap, with a hood to fold down over my ears & a band to pass under my nose as a respirator; & in case of heavy rain I proposed to make myself a little tent, or tentlet, with my waterproof coat, three stones & a bent branch.

He then needs a beast of burden to carry his bed & few possessions & meets Father Adam, an old man willing to sell his donkey. In the market place at Monastier, negotiations begin,

I was already backed by a deputation of my friends; but as if this were not enough, all the buyers & sellers came round & helped me in the bargain; & the ass & I & Father Adam were the centre of a hubbub for nearly half an hour. At length she passed into my service for the consideration of 65 francs & a glass of brandy. The sack had already cost 80 francs & two glasses of beer; so that Modestine, as I instantly baptized her, was on all accounts the cheaper article.

They set off, & after some very comical experiments in keeping the sack on Modestine’s back & encouraging her to keep moving faster than a snail’s pace, Stevenson sets out on his exploration of the Cevennes. The heart of the book is his sojourn at the Trappist monastery of Our Lady of the Snows. Stevenson’s Protestant heart quails a little at the thought of entering a Catholic monastery but he finds interesting companion there among his fellow travellers & the monks. Although many of them are bound by a vow of silence, the monks who serve visitors are allowed to speak & he learns a little more about the Trappist’s austerely beautiful way of life,

I took my place in the gallery to hear Compline & Salve Regina, with which the Cistercians bring every day to a conclusion. There were none of those circumstances which strike the Protestant as childish or as tawdry in the public offices of Rome. A stern simplicity, heightened by the romance of the surroundings, spoke directly to the heart. I recall the whitewashed chapel, the hooded figures in the choir, the lights alternately occluded & revealed, the strong manly singing, the silence that ensued, the sight of cowled heads bowed in prayer, & then the clear trenchant beating of the bell, breaking in to show that the last office was over & the hour of sleep had come; & when I remember, I am not surprised that I made my escape into the court with somewhat whirling fancies, & stood like a man bewildered in the windy starry night.

As he journeys through the Languedoc region, he hears stories of the Protestant enclave that stood out against the Catholic majority during bloody civil wars centuries before. He meets helpful peasants & obtuse peasants. He describes the mountainous countryside & the more or less comfortable inns he stays in on the journey (when he's not camping out in his sleeping sack). Near the end of his travels, at St Jean du Gard, poor Modestine is sore & in need of rest. Stevenson is eager to push on to Alais where his letters await him &, rather unfeelingly, sells Modestine without a moment’s thought & jumps on a coach to complete his journey. But,

It was not until I was fairly seated by the driver, & rattling through a rocky valley with dwarf olives, that I became aware of my bereavement. I had lost Modestine. Up to that moment I had thought I hated her; but now she was gone, “And oh! The difference to me!” For twelve days we had been fast companions; we had travelled upwards of a hundred & twenty miles, crossed several respectable ridges, & jogged along with our six legs by many a rocky & many a boggy by-road. After the first day, although sometimes I was hurt & distant in manner, I still kept my patience; & as for her, poor soul! She had come to regard me as a god. She loved to eat out of my hand. She was patient, elegant in form, the colour of an ideal mouse, & inimitably small. Her faults were those of her race & sex; her virtues were her own.

My copy of Travels with a Donkey is a beautiful Folio Society edition with illustrations by Edward Ardizzone. There are no notes or introduction so I don’t know why Stevenson was in France or what prompted him to take his journey. I’ve read quite a bit of Stevenson in the last year or so & it’s probably time I read a good biography of him. I know Claire Harman has written one & I’ve loved her books on Jane Austen, Fanny Burney & Sylvia Townsend Warner so I think that’s the one I need.
Posted by lyn at 2:56 PM