The Tale of Genji - Murasaki Shikibu 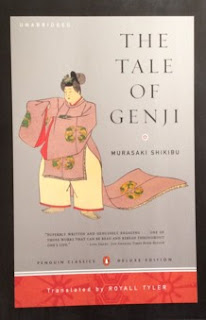 It's so difficult to write about a book like Genji. I've been reading it over the last six weeks & it's been a wonderful experience. Written around 1000 at the Heian Court of Japan by an author whose name we don't know (Murasaki is the name of one of the main characters & may have become a nickname of the author), this is the earliest novel to be widely read today in competing translations that all have their admirers.

The story is in two parts. Two thirds of the book tell the story of Genji, the son of the Emperor by one of his Intimates. Genji's mother came from a nondescript family & her position at Court relied solely on the Emperor's love for her. He favoured Genji above his legitimately born son but politics would not allow him to make Genji his heir. Instead, after the early death of Genji's mother, the Emperor gave Genji the surname Minamoto which enables him, as a commoner, to have more freedom than a member of the Imperial family could have. Genji will be fabulously wealthy & also play an important role at Court, rising up the hierarchy to eventually be giving the honorary title of Retired Emperor. Genji is also devastatingly handsome, exuding a wonderful perfume, charming & skilled at the courtly arts of painting & poetry. As he grows up, his relationships with women will dominate the narrative.

Whoever chanced to lay eyes on Genji was smitten by him. After one glimpse of the radiance that attended him, men of every degree (for the crudest woodcutter may yet aspire to pause in his labors beneath a blossoming tree) wished to offer him a beloved daughter, while the least menial with a sister he thought worthy entertained the ambition to place her in Genji's service. It was therefore all but impossible for a cultivated woman like Chūjō , one who had had occasion to receive poems from him and to bask in the warmth of his beauty, not to be drawn to him.She, too, must have regretted that he did not come more often.

Genji's actions are not always noble or chivalrous but they reflect the dominant role of men in Japanese society. He marries a well-connected young woman, Aoi, a few years older than himself. The marriage is not particularly successful, Aoi resents the match to a younger, illegitimate son of the Emperor, but they have a son, Yūgiri, before Aoi dies. Genji, meanwhile, has fallen in love with his father's young wife, Fujitsubo, & their affair results in the birth of a son who will eventually succeed to the throne, his origins kept secret. When Genji is just a young man, he spends an evening with his friends as they discuss the different kinds of women & the different kinds of love. In some ways, he spends the rest of the novel investigating these kinds of love. Eventually he will build a palace, his Rokujō estate, where he will install a lover in each of the four wings.

Genji's most important & lasting relationship will be with Murasaki, Fujitsubo's niece, who he meets when she is a child of twelve. He takes her into his house & brings her up, eventually seducing her. She becomes the mistress of the east wing at Rokujō and, although they have no children together, Murasaki brings up several other children, & their relationship is close & loving. After his father's death, Genji is sent into exile as a result of the machinations of the new Emperor's mother.
During this period of exile, he meets another of his loves, known as the lady from Akashi. She has a daughter & Genji brings them both to live at Rokujō when he returns in triumph.

Genji agrees to marry the favourite daughter of his half-brother the Emperor who wishes to retire from the world. This is a mistake as the girl is a very ordinary young woman with no talents to attract Genji. He feels obliged to go through with the marriage & is horrified when she is seduced by another man. The boy, Kaoru, is assumed to be Genji's child & his mother is installed in yet another wing of Rokujō. At the same time, Murasaki's health is failing & Genji spends all his time with her. Her death devastates him & although he often declares that he wishes to leave the world & become a monk, he doesn't do this but dies soon after.

The last third of the novel takes place some years later & introduces a younger generation. Kaoru & his friend, Genji's grandson, Niou. These chapters are much more of a piece, telling one tragic story. The two young men become rivals for the attentions of the daughters of a Prince who has retired from the world to live at Uji. The elder daughter, Ōigimi, is courted by Kaoru but he is also attracted to her sister, Naka no Kimi, who is eventually seduced by Niou. Niou installs Naka no Kimi in his palace where she is made unhappy by his philandering. Meanwhile, Kaoru, a serious young man, hesitates to pursue his suit & Ōigimi, distressed by her father's death & her sister's fate, starves herself to death. Kaoru is grief stricken but is intrigued when a young woman appears who is the unrecognised illegitimate daughter of the Uji Prince. This young woman, Ukifune's, story is the most tragic of all as she is pursued by both Kaoru & Niou.

This is a very basic description of the plot which ranges far & wide over the 1100 pages of the book. The style of the narrative is allusive, with most characters referred to by their titles which keep changing. I found it confusing but decided to just keep reading & hope that I would remember who was who. I found that if I didn't read it for a few days (usually because I was at work & couldn't carry the book around with me), it took me a while to get back into the story again. There are hundreds of characters &, as well as the tragedy, many very funny scenes. The narrator also looks at Genji's behaviour, especially his ready recourse to tears, with a satirical eye & by no means approves of his seductions & the pain he causes Murasaki.

Many ladies lived this way under his protection.He looked in on them all, fondly assuring each that despite his long silence he was always thinking of her. "My only care is the parting that no one evades. 'I know not what life remains...'" he would say, and so on. He loved them all, each according to her station. At his rank he might deservedly have swelled with pride, and yet he seldom advertised himself, treating all instead with tact and kindness as place or degree required, so that just this much from him sustained many through the years.

The setting of the story, in Imperial Japan, is so different from anything I've ever read before, that I felt I was learning about the culture as well as reading an involving story. Everything about the period & the country was strange to me. The houses, the rituals, the pastimes. The courtly emphasis on poetry was fascinating. There are over 700 short poems in the text which illuminate behaviour & feelings. They also illuminate character as the ability to compose a suitable poem at any moment is a prized accomplishment. The detailed descriptions of clothes, furnishings, entertainments create this world that is involving yet so removed from the world outside the Court & the privileged classes. There's little mention of politics or war; the pursuit of happiness & the entanglements of his relationships are all that matter to Genji & his circle.

I was also interested in the social rituals. Women's lives were so circumscribed. Men could not approach a woman directly. He would not even see her but speak through intermediaries. If he was in the same room, she would be seated behind a curtain. There are many scenes where men peer through cracks in walls or take advantage of the wind blowing aside a curtain to catch a glimpse of a lady. Men had all the power as is seen in many of the stories in Genji. If a man forced his way into a woman's presence, she was compromised. The men & women in the novel are never alone - solitude seems to be a foreign concept - yet determined young men are able to seduce or rape women almost at will as the servants count for less than nothing in this world of privilege. Even Kaoru, who is more sensitive than his wilful friend, Niou, is capable of causing pain through selfishness when Ōigimi is ill,

He sat near her as usual, and the wind blew the curtains about so much that her sister retired farther back into the room. When the disreputable-looking creatures went to hide from him in embarrassment, he moved closer still. "How do you feel?" he asked through his tears. "I have prayed for you in every way I know, but none of it has done any good, and you will not even let me hear your voice. It is so painful! I shall never forgive you for leaving me this way."

I loved this final section of the book. At around 300pp it's the length of a novel on its own & the narrative is more coherent with just one storyline. It's full of interest & tragedy from the fate of the Uji sisters to the contrast between Kaoru & Niou.

Religion is also an important factor. Characters often long to leave the world & enter the religious life & many do so. The supernatural in the form of evil spirits & possession is ever-present & there are several exorcisms where the evil spirits speak to the monks who are trying to remove them. I also loved the descriptions of the countryside & the weather. The details of dress, the correct colours to wear for mourning or at different times of the year, were all fascinating. The book creates a complete world that it was a real delight to disappear into for hours at a time. I read the Penguin Deluxe edition translated by Royall Tyler & the notes & line drawings were a real help in visualising Genji's world & understanding the allusions in the text. I can definitely imagine rereading Genji & next time I'll try a different translation.

My only problem now is what to read next! I often feel this way after reading a long book that was as absorbing as this one. I'm still listening to The Romanovs & reading Leon Roch with the 19th century group but I need something else. I've been picking books up & putting them down for a few days now but nothing has really grabbed me. Maybe some short stories? Something completely different is called for although that won't be difficult as there's nothing else quite like The Tale of Genji.
Posted by lyn at 2:26 AM