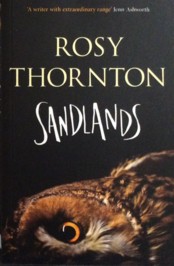 It can be difficult to write about short stories. It's not easy to discuss plot without giving too much information. In this case, however, it's easier because Rosy Thornton's impressive new volume of stories, Sandlands, share many common elements. Place is the most obvious as all the stories are set in the Suffolk fenlands & often share the same locations - the Ship Inn, Willett's Farm, a WWII airfield now turned into a museum, the village of Blaxhall. There are also common themes - nature, remembrance, the past reaching into the present. I enjoyed the literary echoes too, of Dorothy L Sayers' The Nine Tailors in Ringing Night, a story featuring bell ringers & of Edward Thomas's poem As the Team's Head Brass in Stone the Crows, where a WWII Spitfire pilot looks back on his war service from his nursing home to a scene that became as familiar during WWII as it had been thirty years before.

Nothing in that evening landscape moved to give it life and substance - until suddenly, beyond my left wingtip, a miniature figure swung into view, straddling the midline of a field where it changed from the dull grey-brown of stubble, to a deeper richer russet, ridged in black. At first I had no sense that the figure was in motion, so slowly did it creep along the line of the last furrow, edging forward no faster than a sluggish beetle, dazed by the sun. I took another turn, dropping my height a little, to gaze down until I could make out the broad backs of a pair of chestnut horses, the glinting Y-shape of the plough and, behind it, just visible, the dot of a man's head.

Sometimes the literary inspiration is more overt as in A Curiosity of Warnings, when a man follows in the footsteps of the protagonist of one of M R James' ghost stories with unintended consequences. Other stories with supernatural touches include The Witch Bottle, where Kathy's new home holds the memory of a long-ago tragedy that threatens the present; The White Doe, where Fran experiences the mythical or mystical visitations of the doe while coming to terms with the death of her mother & The Watcher of Souls, where a barn owl's nest hides a cache of love letters from long ago.

One of my favourite stories was Whispers. Dr Theodore Whybrow has been working on the definitive biography of Regency poet Wiliam Colstone for years. He's almost paralysed by the pressure that comes with writing a book so long-awaited. On impulse, he buys a Martello tower on the coast, a remnant of the Napoleonic Wars that he knew as a boy, & as he spends more time there, he feels the closeness of the past & the inspiration that he needs.

It had been a calm night outside, overcast and starless, the sea as close to a millpond as he had known it. But the tower was never silent. Even on the most breathlessly still of nights, there were whisperings in the bricks. He sometimes wondered if it was really the sea - some subterranean echo or vibration, rippling up through the walls from the shingle on which they stood. Or perhaps an illusion, a trick of the mind, like the echo of the waves heard in a seashell. Yet, for all that, there was a paradoxical realness and solidity about the voices here, an immediacy - yes, that was the word for it: immediate, unmediated - which recalled with a sudden sharp pang the early days of his scholarship, that quickening of the blood he had thought to have lost. A connection thought severed, rejoined.

Many of the stories are about the links between generations, of the same family or of the people who have lived in a house or a place. In All the Flowers Gone, three generations of women are connected to an airfield. Lilian works at the airfield during WWII & falls in love with a pilot. Her daughter, Rosa, protests against nuclear weapons at the base in the 1980s. Rosa's daughter, Poppy, is a botanist, searching for a rare flower that has been sighted near the old runway. I loved the way that the women were linked not only by blood but by cycling with its connotations of freedom & the way that the place played a significant role in the lives of Lilian, Rosa & Poppy.

It was a perfect morning for cycling. The temperature must have fallen during a clear night and a dawn mist had formed over the fields.As Poppy bowled along Tunstall Lane it rose in layers, which seemed to lift and peel away without losing any of their density, and hung just clear of the barley so that sunlight filtered through underneath, tingeing them from below with watery gold. Once through Tunstall village and out on the road that stretched straight ahead into Rendlesham Forest, she rose on her pedals in her battered trainers, pushing down harder with each stroke, enjoying the stretch in her calves and the rush of cool air in her lungs, until the dark trees on either side were no more than a blur.

In Nightingale's Return, the son of an Italian POW travels back to the farm where his father worked during the War & we travel back to Salvatore's time at Nightingale Farm while his son makes the journey in the present day.

I loved the humour in many of the stories. I think my favourite story was The Interregnum. The rector of St Peter's Blaxhall goes on maternity leave & her replacement is Ivy Paskall. Ivy is a lay reader studying for the ministry rather than a member of the clergy but secretary of the PCC, Dorothy Brundish, is sure that the parish will manage. That is until Ivy's plans for bonfires at Epiphany & a women's feast at Candlemas, the Christian equivalent of Imbolc, begin to cause some uneasiness. Ivy's explanations seem very reasonable but are her ideas maybe a little pagan for the congregation of St Peter's?  In High House, a woman cleans for Mr Napish, a retired engineer whose obsession with theories about tides & flooding feed into his unusual hobby.

I enjoyed this collection of stories very much. The book is beautifully produced by Sandstone Press & the cover image is incredibly striking, evoking the themes of nature & unease in the stories. I've read all Rosy's novels & reviewed several of them here (see Ninepins, The Tapestry of Love, More than Love Letters). Rosy was the first author to contact me back in 2010 when I started blogging & ask if I would like to review her book which was such a thrill. Luckily I've enjoyed her books so reading them has been a much-anticipated treat.

Rosy Thornton kindly sent me a review copy of Sandlands.
Posted by lyn at 3:08 AM