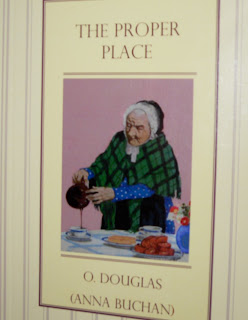 The Proper Place is the second novel I’ve read this year by O Douglas. The first was Pink Sugar which I’ve reviewed here. Both books have been reprinted by Greyladies, a publishing house based in Edinburgh who specialise in between the wars middlebrow novels. “Between the wars” & “middlebrow” are two of my favourite adjectives so I was very excited to discover Greyladies about a year ago. O Douglas was the pseudonym of Anna Buchan, sister of John Buchan of 39 Steps fame. Her books couldn’t be more different from her brother’s adventurous spy thrillers. O Douglas writes of middle class women living quiet, domestic lives in small towns & villages. But, those of us who love middlebrow fiction know how much drama can lurk beneath the respectable facade of village life. The books I’ve read so far have been set in Scotland & Douglas obviously has a great love for the Scottish countryside.

In The Proper Place, Lady Jane Rutherfurd, her daughter Nicole & niece Barbara, have to leave their ancestral family home in the Borders. The book is set just after the Great War, & the feeling of melancholy, grief & loss is obvious in many of the characters who have lost loved ones. The Rutherfurds lost two sons in the War & Lady Jane’s husband died not long after, leaving her without the income she needs to stay on at Rutherfurds. Nicole & Barbara couldn’t be more different in outlook & temperament. Nicole is enthusiastic, interested in everyone & everything. She is heartbroken about moving but puts her mind to the task of finding a new home. Barbara, who has lived with the Rutherfurds since she was a child, resents the move & is determined to stay true to her friends & the home she loves. She’s a prickly character, not as immediately lovable as Nicole & maybe she’s always felt a little overshadowed by Nicole’s sunny nature & good looks.

Rutherfurds is sold to the Jacksons, a nouveau riche family from Glasgow. Mrs Jackson is a wonderful character. Bold, honest, garrulous, with absolutely no dress sense, she doesn’t really want a country seat. But, her husband thinks it’s the next stage of their rise in prosperity. Mrs Jackson is very happy in her Glasgow suburb but she decides to throw herself into county life when the move to Rutherfurds is inevitable.

Nicole eventually finds a house in a seaside town in Fife. Called the Harbour House, it’s right on the quay, in sight & smell of the fishing boats & squawking seagulls. The house itself is wonderful, I loved the descriptions of the rooms & the way the Rutherfurds blend some of their own furniture & possessions to make themselves a new home. Nicole throws herself into this new life, making friends of the neighbours & refusing to let her regret for her old home blight her life. Barbara is harder to reconcile. She yearns after her old friends & finds acquaintances among the local county families.

The new neighbours in Kirkmeikle are an interesting lot. Miss Symington, a wealthy spinster, living in a comfortless house & living only for cold duty. Her little nephew, Alistair, who becomes friends with Nicole & leads to her friendship with Simon Beckett, a young man who has returned from an expedition to Everest & is writing a book about his experiences. Mr Lambert, the minister & his wife who loves reading. Mrs Heggie, a kind, outgoing, inquisitive woman with a sulky daughter, & the Bucklers, who have returned to Scotland after 30 years in India.

Meanwhile, Mrs Jackson is nervously finding her feet among the gentry & taking on some of the duties that Lady Jane used to perform. There are some wonderful scenes when she decides to invite Nicole to visit & give a dinner party & dance in her honour. She has an ulterior motive because she wants Nicole to marry her son, Andrew. Nicole catches a chill & Barbara takes her place with unintended consequences for Barbara, Andrew & Mrs Jackson.

This was such a readable book. It reminded me of the qualities I love in Dorothy Whipple’s books. Unputdownable & with characters I care about. I loved the feeling of gentle melancholy that is evident in so many books of that post-war period. As well as the grief there's also a quality of stoicism in these women. So many men gone & the women left behind to get on with living & they do get on with living & find some compensations in the changes that life brings. Greyladies also publishes Eliza For Common by O Douglas & I can’t wait to get my hands on that. Douglas wrote quite a few novels according to the list inside my copy of The Proper Place & I hope Greyladies keep reprinting them.
Posted by lyn at 7:38 PM