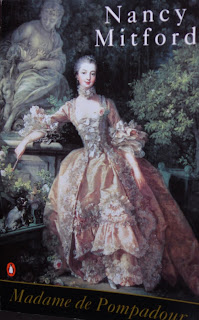 I’ve been reading about royal mistresses this week. I’ve just finished reading Nancy Mitford’s biography of Madame de Pompadour, mistress of Louis XV & I’m half way through listening to the audio book of Tracy Borman’s biography of Henrietta Howard, mistress of George II. Both women lived in the 18th century, a period I’ve never been terribly interested in, but recently I’ve been reading more about it. I’ve always been more attracted to the Tudor & Victorian periods. Then, I became interested in Richard III so that led me back a little through the medieval period. Then the Anglo-Saxons took my fancy & my love of early 20th century fiction led to an interest in the history of the period & the World Wars. So, it was inevitable that I would get to the 18th century sooner or later.

I’ve dabbled in the 18th century before with Amanda Foreman’s Georgiana, Flora Fraser’s Princesses & Stella Tillyard’s Aristocrats, all biographies of fascinating women. There are also big gaps in my knowledge of French history. Apart from the Revolutionary period & the 16th century, I really only know about French history when it impinged on English history. So, Nancy Mitford’s witty, elegantly written biography was a good place to start.

Madame de Pompadour’s full name was Jeanne-Antoinette Poisson, Madame Le Normant d’Etioles, Marquise-Duchesse de Pompadour, known to her family as Reinette. I’ll refer to her as Madame, I think! Born into a loving bourgeois family, Madame made an early marriage to Monsieur d’Etioles but she always had great ambitions. Her charm & beauty had captivated everyone she met. She visited a fortune teller when she was nine & was told she would be the mistress of a king & she was called Reinette (little queen) after this. She was an excellent amateur actress, a skill she put to good use in later years when she put on theatrical performances to amuse the King at Court. She was lovely without being truly beautiful. None of the many portraits by artists such as Boucher are said to be very like her. Mitford quotes some descriptions of Madame by her contemporaries, such as Dufort de Cheverny,

Not a man alive but would have had her for his mistress if he could. Tall, though not too tall; beautiful figure; round face with regular features; wonderful complexion, hands and arms; eyes not so very big, but the brightest, wittiest and most sparkling I ever saw. Everything about her was rounded, including all her gestures. She absolutely extinguished all the other women at Court, although some were very beautiful.

It was almost unheard of for a bourgeoise to become the King’s mistress & her ascendency caused much gossip & jealousy. Although any woman would have caused just as much gossip as gossip was almost the only thing that kept the courtiers from dying of boredom. Madame was a great patron of the arts. She was responsible for the Sevres china factory’s success & was a great admirer of writers such as Voltaire who she helped with her friendship & contacts at Court. She was a great gardener & when the King built the Petit Trianon for them to retire to, Madame was responsible for the design of the gardens. She was sincerely devoted to Louis & he to her, although his devotion didn’t prevent him sleeping with as many other women as he fancied. Madame became quite influential politically as well. The King & his chief ministers would meet in her apartments & she was very involved in the peace negotiations during the Seven Years War.

Louis remained devoted to Madame for nearly twenty years. Her poor health was the only blot on her happiness & she died of a lung complaint at the age of 43. Louis was so attached to Madame that he allowed her to die at Versailles (it was the custom that only members of the royal family were permitted to die there). Her body was immediately removed after her death to a chapel at the Hotel des Reservoirs nearby. The King watched the cortege on its journey to Paris from a balcony of the palace,

He watched the Marquise as she went back up the long Avenue de Paris; in the bitter wind he stood there without coat or hat until she was out of sight. Then he turned away, tears pouring down his cheeks. “That is the only tribute I can pay her.”

In some ways, Henrietta Howard’s story is similar to Madame de Pompadour’s. Henrietta was born into a noble, but impoverished family. After her father’s death in a duel & her mother’s death when Henrietta was just 12, she had to rely on the kindness of relatives. She made an early, disastrous marriage to a distant relation, Charles Howard. He was a drunken womaniser who abused his wife physically & mentally. They were not well-off as Charles gambled & drank away what money they had, mostly Henrietta’s allowance. Henrietta’s only joy in the years of her marriage was her son, Henry. The Howard’s precarious financial situation led to them living with relations until their welcome wore out & then in a succession of dingy lodging houses.

Then, Henrietta had the idea of selling everything they had & going to the Hanoverian Court at Herrenhausen in Germany. The last of the Stuart monarchs, Queen Anne, was ailing & her heir was her cousin, Dowager Electress Sophia of Hanover & her son, the Elector George Louis. Henrietta thought it might be possible to ingratiate herself with the Hanoverians that would result in a position at the English Court when they succeeded Queen Anne on the English throne. Henrietta was an attractive young woman, resourceful, intelligent & witty. She was also discreet & modest. Sophia was delighted with her as was her grandson, George Augustus & his wife, Caroline.

Sophia died just two months before Queen Anne so it was George Louis who became George I of Great Britain. Fortunately for Henrietta, the new Princess of Wales, Caroline, honoured a promise to find her a position at Court & Henrietta became one of the Princess’s Women of the Bedchamber. Here was the longed for financial security at last. Henrietta was separated by Charles by this time, made easier by the fact that he was in King George’s Household & the King & Prince of Wales loathed each other & kept very separate Courts. She was constantly afraid of Charles’s temper though & worried that he would create a scandal that would harm her position. She was also devastated that He would not allow her to see young Henry, who was growing up to despise his mother.

Several years after the Hanoverians arrived in England, Henrietta became the mistress of the Prince of Wales. Prince George wasn’t a very prepossessing character, unattractive physically with his stoutness & bulging eyes, he had a choleric temper & was an incredibly boring conversationalist. He was also still very much in love with his wife & retired to bed with her at every opportunity, much to the laughter of his courtiers. George felt he must have a mistress. It was expected of a Prince & he was tired of people saying that he was dominated by his wife. It was certainly no love match but it did give Henrietta a measure of influence & she used this to further the careers of her friends, including the writers, John Gay & Alexander Pope.

I’m just at the halfway mark of this fascinating book & George has paid Henrietta off very generously with enough money, furniture & jewels to buy & furnish her own house at Twickenham. George was notoriously miserly so this was a magnificent gesture & he tied the gift up legally so that Charles couldn’t get his hands on any of it – vitally important in this period when everything a woman possessed belonged to her husband. Henrietta is looking forward to leaving Court & living quietly in the country but I can’t help thinking Charles is destined to make trouble for her. I’m looking forward to the rest of Henrietta’s story.
Posted by lyn at 2:34 PM