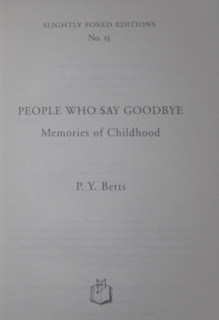 People Who Say Goodbye is the latest Slightly Foxed edition, a series of memoirs reprinted by that very enterprising quarterly journal, Slightly Foxed. The books themselves are lovely objects, small cloth-bound hardbacks with the same creamy paper as the quarterly & a ribbon bookmark. I’ve taken a photo of the title page because I have trouble getting a good shot of the spine. The tiny gold writing always looks blurry. It’s difficult to describe the charm of this book. It’s all in the tone of the writing, so mordant & unsentimental. On the surface it’s just a memoir of growing up in a London suburb around the time of WWI but the way it’s written is so engaging that it becomes more than that.

Phyllis was born in 1909 & the memoir ends in around the mid 20s. The family lived in Wandsworth so there was a prison & a military hospital practically on the doorstep. Phyllis used to watch the military funerals go by & watch the crowds outside the prison on execution mornings. Although there is a lot of humour in the book, there are also some passages of great poignancy. Here, Phyllis describes the military funerals of the soldiers who had died of their wounds in the nearby military hospital,

The procession would go by, down the hill into the wintry afternoon with its faint foggy smell that gripped your throat if you were out in it. It was the smell of coal fires and winter. The sky, when the cortege had gone out of sight, would be smoky grey with red streaks over the low-lying ground beyond the cemetery. Those afternoons were very quiet. The road seemed scarcely used. I would wait. Then faintly the bugle would sound, final and sad, the lamenting never-coming-back notes of the Last Post. It seemed to me a dark, smoky, red slash of sound against the quiet grey of the London winter evening coming down. Not long afterwards the soldiers and the horses were to be heard coming back at a smart trot, the coffin and the flag gone from the gun-carriage. The soldiers were hurrying home to their barracks for tea with plum-and-apple jam.

It’s that last detail, the plum & apple jam, that is so poignant & just the thing a child would think of. It makes me think of Wilfred Owen’s line, “And each slow dusk, a drawing down of blinds.”

The Betts family is just fascinating. Mother is almost brutally honest; just after the scene quoted above, Phyllis asks her what happens to all the people buried in the cemetery. They rot, is the answer. Phyllis has to have teeth extracted. Her mother tells her that it will be painful but the pain will be short & sharp. It was & Phyllis was never frightened of the dentist because her mother always told her the truth. She always seems to have employed maids who have a problem (lying, a tendency to be saved by the Salvos, adenoids) & they usually leave the Betts's to "better themselves". Sometimes they come back when the bettering doesn't work.

The doctor her mother always consults is known by Phyllis’s father as Old Whhhen-and-Whhhatski because of the way he spoke. He only prescribes two medicines, brown or red, & he's preoccupied with the state of their bowels. He misdiagnoses her brother's diphtheria as tonsillitis. Mr Betts is a clerk in his father in law’s business & is a plain speaker who doesn’t suffer fools at all. Phyllis’s brother is older & very superior in attitude,

A word, but only a word, about my brother. He was my senior by five years and will be rarely mentioned. The reason for this is that he is still living, in his middle eighties with all his wits about him, capable, and perhaps quite willing, to sue me for libel should a loophole for a libel action present itself. Anyone who has had a brother will understand that it is difficult to write about him without incurring the risk of a libel action. If you can’t say something kind, don’t say anything at all. We have all heard that. So I am not saying anything at all about my brother, or at least not much.

Then there's the contrast between her mother's family (posh but unloving) & her father's (poor but kind). Her mother is considered to have married beneath her & her spinster sisters take a very superior attitude. This grandfather is a very cold man, who Phyllis doesn’t hesitate to say she hated. He had no time for children & regarded her infrequent visits as a trial to be got through. Her grandmother is a more shadowy figure Phyllis describes her conversation with such accuracy that she comes alive,

She spoke of Joseph & his coat of many colours not only as if she had lived next door to Joseph, but had patched his coat. All the Biblical characters were everyday people to her. She had taken strongly against Abraham for his cruel treatment of the ram in the thicket and said it was just what you would expect of a man with a beard like that, she had always disliked a beard on a man.

There’s also the sad story of Uncle Jack, who comes back from the war with a terrible secret & marries a divorcee with two children, putting himself & his family beyond the pale as well. Phyllis’s paternal grandparents are loving & kind. They come to the rescue when Phyllis has to be quarantined while waiting to see whether she has caught diphtheria from her brother. The rich family with oodles of room couldn't possibly have her but her other grandparents don't hesitate.

I was struck by the very realistic view of illness & death, probably typical of a time when medicine was still a matter of hit & miss. A 20 year old girl dies of diabetes because insulin hadn't been discovered & there was no treatment; several childhood friends die of illnesses like black measles, whatever that may have been. And, of course, the military funerals were a constant reminder of the war.

Phyllis was a very self-sufficient child, very matter of fact - or at least, the memoir is written in a very matter of fact way. That’s its charm & where most of the humour comes from. Phyllis is never self-pitying. She changed schools often & her mother would never let her buy the gym kit of the new school before she had grown out of the old one so she was always in the wrong colour uniform. Just as she would get a new gym kit, she would change schools & she would still be in the wrong colour uniform. This doesn’t bother her at all. She puts up with the teasing & because she is unaffected, it soon stops. She describes her childhood as she remembers it.

According to the Preface to this reprint Phyllis Betts was a short story writer in the 30s but dropped out of sight until she was rediscovered in the late 80s & encouraged to write this. I'd love to know what happened in her life between the 30s & 80s.
Posted by lyn at 12:44 PM