The Best of Books and Company - ed Susan Hill 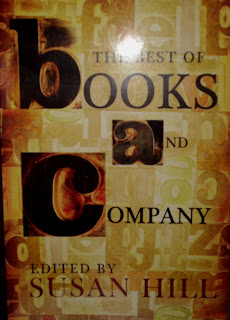 I love books that send me running to my shelves, inspired to read or reread a book I'd forgotten I even owned. This selection of articles from Susan Hill's little magazine Books and Company is just that sort of book. Books and Company was published by Susan Hill from 1997-2001. How I wish I'd known about it, I would have subscribed immediately. It strikes me as a forerunner of the wonderful literary magazine, Slightly Foxed. The articles are not really reviews, more appreciations of an author or a book, a reminiscence about learning to read or in Jeanette Winterson's case, learning how to hide her reading from her mother by memorising chunks of fiction & writing them down on slates. Winterson's description of reading is one I think all readers would agree with,

Time with a book is not time away from the real world. A book is its own world, unique, entire. A place we choose to visit, and although we cannot stay there, something of the book stays with us, perhaps vividly, perhaps out of conscious memory altogether, until years later we find it again, forgotten in a pocket, like a shell from a beach.

There are articles that made me smile with recognition & remembrance, like Andrew Taylor's two essays about crime fiction. Corpses in the Quad, about the origins & delights of Oxbridge crime, & P C Plod Apprehended, about the way policemen have been depicted in crime novels from Enid Blyton's Mr Plod through the gentlemen policemen like Alan Grant & Roderick Alleyn to modern day sleuths Dalziel & Pascoe.
Penelope Fitzgerald's perceptive essays on two small masterpieces, Sarah Orne Jewett's Country of the Pointed Firs & J L Carr's A Month in the Country which I wrote about here encapsulate the delights of discovering a perfect novel,

This short novel (Country of the Pointed Firs) is her masterpiece, no doubt about that, but it is difficult to discuss the plot because it can hardly be said to have one... In a few pages Jewett establishes forever the substantial reality of Dennett's landing. We know it, we have been there, we have walked up the steep streets and we taste the sea air. Now we have got to get to know the inhabitants, slowly, as the narrator does herself and, in good time, to hear their confidences.

W E K Anderson's wonderful article about the delights of reading Sir Walter Scott had me racing off to check what I had on the shelves. I read quite a few of Scott's novels when I was a teenager but in the last few years I've only read The Lady of the Lake & The Bride of Lammermoor with my 19th century bookgroup. We have The Talisman coming up soon & I'm looking forward to it very much, even more so now that I've read this enthusiastic championing of a novelist who reigned supreme for over a hundred years but then fell out of favour along with the historical novels he wrote. Anderson is the editor of Scott's Journal, which I also have on the tbr shelves & the Journal documents a fascinating period of Scott's life when he was working hard to clear his debts. Anderson champions Scott's ability to write about a broad range of characters. He says only Shakespeare & Dickens can compare with his range & vision,

In reality, the novels appeal to the reader on two levels. They tell a good story, set in an authentic historical period filled with real people, but at the same time they explore the notions of progress, of civilized values and of those qualities which are the same yesterday, today and tomorrow.

Then, there are the books I'd never heard of that I want to read right now even if they're out of print & hard to find. I've read a couple of novels by H Rider Haggard but I had no idea that his daughter, Lilias, wrote books about her life in the Norfolk countryside among other things. Jane Gardam writes about a wet summer holiday in North Yorkshire with a wakeful baby that was only saved by the discovery of the Rev J C Atkinson's memoir, Forty Years in a Moorland Parish, the story of his life as Vicar of Danby near Whitby in Yorkshire,

He estimated that in his first forty years at Danby he had walked seventy thousand miles on parish duty and at least as many again for his 'recreation'. His 'recreation' was often a sort of mystical rapture and often hard digging into Anglo-Saxon barrows. He was blissfully happy. 'Angels would forget their wings.' he said.

There are essays on the Brontes by Lucasta Miller, M R James's ghost stories by John Francis, William Maxwell by Adele Geras & Osbert Sitwell's autobiography by Philip Ziegler & Margaret de Fonblanque on the independent women writers of the 20s like Dorothy L Sayers, Ivy Compton Burnett & Vera Brittain & Winifred Holtby. My only problem with a book like this is deciding what to read next. I've pulled out a few of Walter Scott's novels to look over & downloaded some more of Sarah Orne Jewett's short stories from ManyBooks & popped a few other bits & pieces into my Amazon basket & wishlist. The possibilities are endless. With collections like this, I will never be short of something to read next.
Posted by lyn at 1:17 AM