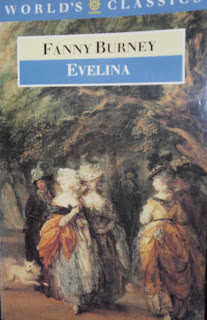 The subtitle of Evelina is the History of a Young Lady's Entrance into the World which describes both Evelina's & Fanny Burney's experiences. It was Fanny Burney's first novel and, like Lord Byron, she woke up the next day to find herself famous. Unlike Byron, though, Fanny was almost morbidly shy & was both horrified & fascinated by her new fame. She was lionised by the bluestockings of the day but especially enjoyed her friendship with the great Dr Johnson, who loved the novel & quoted from it in his letters. Her fame also brought her to the attention of the royal family & she was offered a position as lady-in-waiting to Queen Charlotte. Her father, the famous musicologist Dr Charles Burney, insisted she accept the post (which wasn't really refusable anyway) & Fanny spent a miserable few years at Court. Her health & spirits suffered from the boredom & backbiting & eventually she was allowed to graciously resign & return to private life. 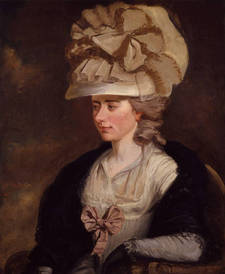 Fanny Burney's life was an extraordinary one (picture above from here). Her Letters & Journals are wonderful, full of witty descriptions & emotion. She famously described the mastectomy she endured without anaesthetic in 1812. She survived the operation & recovered from breast cancer, living until 1840, when she died aged 87. She had married a French emigre, Alexandre D'Arblay, in 1793, & they had a son, Alex. Sadly, husband, son & her sisters (to whom she was very close) predeceased her.She was much admired, most famously by Jane Austen, who mentioned her novels, Camilla & Cecilia, in her defense of the novel in Northanger Abbey,

"It is only Cecilia, or Camilla, or Belinda"; or, in short, only some work in which the greatest powers of the mind are displayed, in which the most thorough knowledge of human nature, the happiest delineation of its varieties, the liveliest effusions of wit and humour, are conveyed to the world in the best-chosen language. Now, had the same young lady been engaged with a volume of the Spectator, instead of such a work, how proudly would she have produced the book, and told its name; though the chances must be against her being occupied by any part of that voluminous publication, of which either the matter or manner would not disgust a young person of taste: the substance of its papers so often consisting in the statement of improbable circumstances, unnatural characters, and topics of conversation which no longer concern anyone living; and their language, too, frequently so coarse as to give no very favourable idea of the age that could endure it.''

Evelina is an epistolary novel, told mostly through the letters of Evelina to her guardian, Rev Arthur Villars of Berry Hill. Evelina has been quietly brought up in the country. Her mother had married a young rake, Sir John Belmont, but he had scandalously deserted her & denied their marriage & poor Caroline died in childbirth. Evelina has lived a retired life, her education, both practical & moral, guided by the Rev Villars. At the age of 17 she is about to make her first visit to London in the company of her friend, Maria Mirvan & her mother. Maria's father, Captain Mirvan, is returning from a voyage & they will stay briefly in London before returning to the country.

As soon as Evelina arrives, her social education begins. She goes to a dance where she refuses an invitation to dance from a forward young man, Sir Clement Willoughby, only to accept another man's invitation shortly afterwards. Sir Clement pursues Evelina with questions & complaints about his treatment, leading Evelina to tell him that she had already promised Lord Orville the dance, even though this is not true. The web of white lies becomes more entangled until Evelina is almost distracted. Lord Orville's calm politeness & good manners entrance Evelina although she is mortified that every time she meets him, she seems to be caught up in an undignified scene.

Matters become more complicated when Evelina's grandmother, Madame Duval, arrives from France with the intention of taking the girl back to Paris to be "finished" & to pursue her father until he acknowledges her. Madame Duval is a vulgar, loud woman. Recently widowed, she is accompanied by a young man, Monsieur DuBois, with whom she's on intimate terms. She has had nothing to do with Evelina, having married a Frenchman & not even knowing of her existence until a few years before. The arrival of these "Frenchies" inspires Captain Mirvan to a fit of apoplexy as he displays all the traditional prejudice & xenophobia of the English. His teasing & plotting against Madame Duval is very funny & culminates with a plot to pretend to hold up her coach & steal her jewels which results in her losing her wig & being ducked in a pond.

Evelina is forced to leave her kind friends & stay with her grandmother on another visit to London, where she meets her equally vulgar cousins, the Branghtons, & tries to evade the attentions of Sir Clement while trying to prevent Lord Orville discovering her connections. Many misunderstandings result & there are some very funny scenes when Evelina is persecuted by the unwanted attentions of her family & various suitors. On the one hand she is entranced by London & its attractions. On the other, she has to navigate through the new world of polite society & keep her reputation intact. The difficulties of this show just how circumscribed the life of a young woman could be.

Evelina's social position is ambiguous. The world considers her illegitimate because her rich father has repudiated her mother. She is beautiful & attracts many suitors but are they looking for marriage or just a flirtation? The pitfalls & the dangers of making a false step are constant. The visits to the new pleasure gardens outside London like Vauxhall & Ranelagh illustrate this so well. Evelina becomes separated from her party & wanders down a dark path pursued by some drunken young rakes. In desperation, she takes refuge with two women who turn out to be prostitutes. They think it's all a fine joke & refuse to let her go. Of course, she meets Lord Orville while she's in the company of these women & has to try to convey her mortification while not being too forward or impolite.

Evelina could just be a stock heroine bouncing from one embarrassing situation to the next, getting deeper & deeper into a web of half-truths & evasions. She's a more interesting character than that, though. She learns from every situation she finds herself in. Her moral education has given her a solid grounding & she learns how to conduct herself through the mistakes she makes. Even when her romantic feelings for Lord Orville run away with her, the sober, loving replies from Rev Villars bring her back down to earth. Her good intentions are often thwarted by the adults who should be looking after her welfare but she follows her heart & overcomes all the obstacles on the way to her happy ending. This is a lovely book & I'm glad I finally got around to it as it's been sitting on my tbr shelves for a very long time.
Posted by lyn at 11:39 AM