I had an unexpected day off work yesterday & it was one of the loveliest days I've had in ages - probably because I thought I'd be at work & I wasn't. I had to wait at home in the morning for an electrician so I'd taken a few hours annual leave. He was on time & the job was done quickly, so by 10.30, I could have been on my way in to work. But, I'd just had a letter asking me to take some annual leave as I have accumulated too much & it was a beautiful day, not too hot, lovely cool breeze & work is pretty quiet at the moment & I had nothing urgent that needed to be done. So, I rang in & said I was taking a few more hours annual leave & I'd see them tomorrow. It was a very liberating feeling. 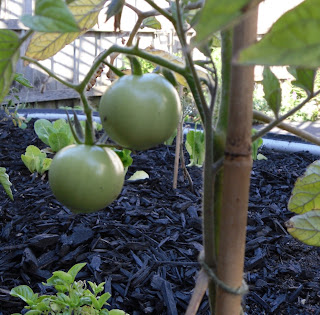 I did a few useful things like a load of laundry & some grocery shopping. I posted my review of Ann Bridge's Dangerous Islands. Then, I looked at my veggie garden & decided that I'd buy some more lettuce seedlings to replace a few plants that hadn't taken off. I also needed to buy Lucky a new collar as she's lost her old one, no idea where, & if she knows, she's not telling. I thought I might as well buy Phoebe a new one as well as she's very hard on her collars & her current one is looking a bit tatty. After visiting the pet shop & the first nursery for the plants, I went along to another nursery which has the most tempting gift shop because I have two friends with birthdays coming up. I found a lovely present for S who's very difficult to buy for & half of T's gift. I'll pick up a couple of other goodies at the farmers market in a couple of weeks to complete it. 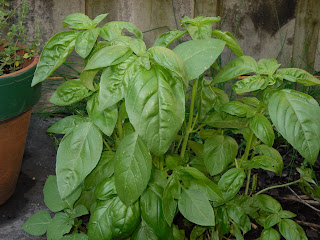 I've become slightly addicted to Hugh Fearnley-Whittingstall & his River Cottage TV series. I sat down after lunch with a cup of tea to watch the last of his Autumn series (DVDs borrowed from work) & I have Spring & Summer to watch as well. My addiction really started with his new Veg cookbook. I've tried several recipes, including the Macaroni Peas that Cornflower recommended. Then, I was looking through a gardening magazine & saw a review of a book that I think will be perfect for another friend's birthday next month. By this stage, I was feeling so organized I was just about ready to start Christmas shopping! 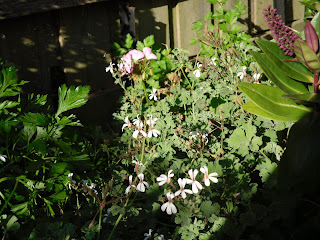 Late this afternoon, I planted out the lettuce, mulched & watered it all in & took these photos of the garden. At the top is my pride & joy, my first almost-ripe tomato. Then, some of the dozen or so green tomatoes at varying stages of growth. Then there's basil. Why is this basil in the garden bed against the fence looking so beautiful when the seedlings from the same punnet that I planted next to the tomatoes in the veggie bed look so sick? I hope it's because they've been eaten by all the bugs that would have eaten the tomatoes if the basil hadn't been there. Above is a picture of that garden bed by the fence with peppermint & pink geraniums, parsley & hebe. 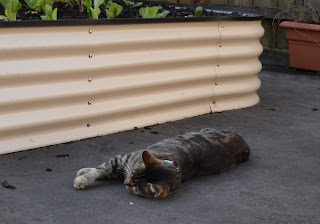 Last but not least, here's Lucky enjoying the late afternoon shade in front of the veggie bed. It's been a lovely day, I feel I've accomplished so much, it felt as though I'd been given a special holiday. I finished the day with a little more Hugh, another cup of tea & a few more chapters of Middlemarch.
Posted by lyn at 2:16 AM