Happily Ever After - Susannah Fullerton 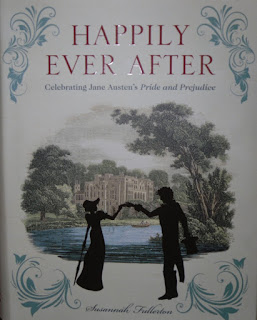 January 2013 marks the 200th anniversary of the publication of Pride and Prejudice. As Jane Austen's most famous novel regularly tops lists of the world's favourite novels, the celebrations of this milestone have been gathering steam for some time. I plan to reread the novel itself very soon but I've also been reading this lovely book about the phenomenon that is Pride and Prejudice by Susannah Fullerton, President of the Jane Austen Society of Australia.

Happily Ever After tells the story of the novel from its first incarnation as First Impressions to the publication of the book By A Lady, to the first reviews by the critics &, more importantly, Austen's friends & family. She discusses the style of the novel & Austen's use of free indirect speech & irony which set it apart from other novels of the time. Having just read Fanny Burney's Camilla, I can only agree that Pride and Prejudice represents quite a departure from other books of the period. Fullerton looks at the characters & the plot, dissects that famous first sentence & looks at the aspects of the story that have spawned a million romance novels from Mills & Boon to Bridget Jones's Diary & the pastel-covered chick lit of the 1990s.

Pride and Prejudice has been translated into over 20 languages & has been the subject of countless sequels & continuations. Elizabeth & Darcy's marriage has been analysed in every possible way & they're even the sleuths in a series of detective novels. The futures of most of the other characters have also been speculated about. My personal favourite has to be the novel where Mr Collins is killed off leaving Charlotte a happy widow. Then there are the erotic & horror novels that are "inspired" by Pride and Prejudice. I would much rather reread the original than read any of these but it's fun to read about them & I'm grateful that Fullerton has done the disagreeable work for me so that I will never feel the need to read them myself.

There have also been stage & film adaptations of Pride and Prejudice . The most famous of these are the 1940 film with Greer Garson & Laurence Olivier, the two BBC series in 1980 & 1995 & the 2005 movie with Keira Knightley & Matthew Macfadyen. I've always had a fondness for the 1940 movie because I love Olivier, even though Greer Garson is too old, the costumes are all wrong & the screenplay was based on a stage version rather than the book so some of the plot points are mangled. I love Melville Cooper as Mr Collins & Edmund Gwenn as Mr Bennet. I must have seen the 1980 series with Elizabeth Garvie & David Rintoul at some stage but I don't remember much about it. It's available on DVD so I'm tempted to buy it as Susannah Fullerton obviously has a great fondness for it & Elizabeth Garvie's performance is generally regarded as excellent.

The 1995 series with Jennifer Ehle & Colin Firth needs no introduction. I love it & have watched it many times. I didn't like the 2005 movie at all & have no desire to see it again although I probably should as my experience of it in the cinema was ruined by giggling teenage girls so I may have been too irritated to appreciate it. I'm sure I don't need to see some of the other adaptations discussed, especially the Mormon version made in 2003 or the 60 min version made for American television in 1959. The actress playing Elizabeth was 40 & the film ends with Elizabeth asking Darcy his Christian name. When he replies Fitzwilliam, she sighs happily & says "Ah, how nice." There's a still from the film in the book & even the costumes look wrong - Victorian, I think.

Happily Ever After concludes with a look at the merchandising that has been produced, especially since Darcymania took over the world after Colin Firth & that wet shirt scene set a million hearts fluttering. I find it quite odd that that scene, which of course isn't even in the book, has become so imitated (very wittily in Lost in Austen) & parodied that the character of Darcy has floated free of the book entirely. It's not even Elizabeth & Darcy, just Darcy or maybe it's really Colin Firth that everyone sighs over. Merchandising isn't new. There were Pamela gowns, fans & prints inspired by Samuel Richardson's novel in the 18th century & Wilkie Collins's The Woman in White inspired clothes & even a quadrille in the 19th century. However, there's been nothing to match the Jane Austen industry that has flourished in the 20th & 21st centuries. Everything from jigsaw puzzles to heritage-themed holidays has been linked to Jane Austen & her books.

Happily Ever After is a delightful book about one of my favourite novels. Pride and Prejudice isn't my favourite Austen novel. It would come third after Persuasion & Sense and Sensibility but I'm looking forward to reading it again & probably getting out my DVDs & watching Elizabeth & Darcy fall in love many times over the next few months.
Posted by lyn at 2:03 AM