Patricia Wentworth was one of the reliable second string of 20th century mystery writers. She's never mentioned in the same breath as Agatha Christie, Dorothy L Sayers or Margery Allingham, but her books are good entertainment & offer a satisfying puzzle in the classic tradition.

The Clock Strikes Twelve has all the elements of a classic mystery. It begins on New Years Eve 1941 at a country house in the English countryside. James Paradine, a wealthy industrialist, is holding his traditional family dinner but instead of proposing the traditional New Year toast, he makes a startling announcement. One of his guests has betrayed him by stealing a vital set of blueprints. Paradine knows who the thief is & he announces that he will be in his study until midnight waiting for the guilty person to come to him & confess. The guests seem confused & surprised but, obviously, one of them knows all too well that Paradine is speaking the truth. Is it Paradine's sister Grace, her adopted daughter, Phyllida or Phyllida's estranged husband, Elliot Wray? Could it be Paradine's stepchildren, Frank & Brenda Ambrose, Frank's wife Irene or her sister Lydia or his nephews Richard & Mark or even his secretary, Albert Pearson?

The evening had been awkward even before Paradine's announcement. Elliot Wray works for Paradine but hadn't seen Phyllida since their marriage broke up just a week after they were married the year before. Grace Paradine had never liked Wray & hadn't approved of his relationship with Phyllida & it was her interference that led to their estrangement. James Paradine is a rich man used to getting his own way & his family is used to obeying his wishes. Next morning, Paradine is found dead, having fallen from the parapet of the balcony outside his study. It becomes obvious that he couldn't have fallen accidentally & was unlikely to have jumped so someone must have pushed him.

The dinner guests staying in the house agree to lie about the events of the previous night & not mention Paradine's accusations. The police arrive & Superintendent Vyner soon discovers that Paradine's death was no accident & the house guests are obviously hiding something. New Years Eve parties don't usually break up before ten o'clock without a reason. Vyner manages to interview Lydia Pennington, who went home early with her sister & brother-in-law, before the others have a chance to see her & the true story is revealed very quickly. Everyone's secrets & hidden motives have a part to play as Vyner continues to gather his evidence.

Lydia Pennington then brings Miss Maud Silver into the story. Miss Silver was Wentworth's series detective, a spinster who has an aptitude for private investigation & is always seen with a piece of knitting at hand. Miss Silver is visiting her niece who lives in the same apartment building as Mark Paradine. Lydia runs into Miss Silver, knows of her reputation as a sleuth & convinces Mark to hire her on the family's behalf to find out the truth.Miss Silver's ability to ask pertinent questions & notice seemingly insignificant details put her several steps ahead of the police.

I enjoyed The Clock Strikes Twelve as an interesting example of the country house locked room mystery with a closed circle of suspects all with motives & hidden agendas. Although the book is set during WWII, the war doesn't really impinge on the action. The stolen blueprints were connected to Paradine's war work & a couple of the characters mention the war in relation to their jobs but it could be set at any time during the Golden Age of detective fiction. Miss Silver is often described as a lesser Miss Marple but while Miss Marple is an amateur who happens upon murder in the course of her quiet life in St Mary Mead, Miss Silver is a private enquiry agent. Her fame has spread by word of mouth, usually by the young women (or their boyfriends) she has saved from the gallows. 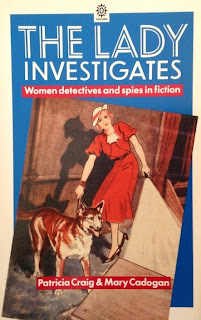 Reading The Clock Strikes Twelve sent me back to one of my favourite books of literary history & criticism, The Lady Investigates : women detectives & spies in fiction by Patricia Craig and Mary Cadogan. Published in 1981, this is a survey of lady detectives from Baroness Orczy's Lady Molly of Scotland Yard to P D James's Cordelia Grey via Marple, Silver, Harriet Vane & Nancy Drew among others. It's a lot of fun if you're at all interested in women as detectives or spies.

Open Road Media have recently released about 30 mysteries by Wentworth as ebooks as part of their classic mystery list which includes authors such as Mary Roberts Rinehart & Christianna Brand.

I read The Clock Strikes Twelve courtesy of NetGalley.
Posted by lyn at 2:23 AM