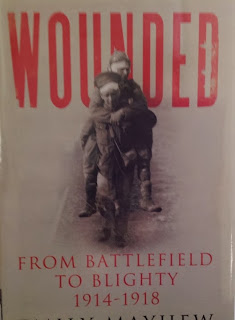 There will be hundreds of books published over the next few years to coincide with the centenary of WWI but I doubt there will be many more moving than Wounded by Emily Mayhew. Instead of descriptions of battles & politics, this is a book about the consequences of battle. It's about the wounded men of France & Flanders & of the men & women who cared for them. The nurses, doctors, orderlies, stretcher bearers & chaplains.

There are so many poignant, moving stories in this book but I'm just going to highlight a few. The overwhelming impression of reading these stories is of ordinary people thrown into unimaginable horror & doing the best they could. In the Introduction, Mayhew describes the book as a "continuous narrative" like a novel, rather than a conventional work of non-fiction.  The thoughts of the participants are presented in this way but every word is based on an interview or a written testimony from a library or an archive or another published source. I think this works well in integrating the voices & experiences of many people on a journey from the battlefield to England, where the lucky ones with Blighty wounds were sent. There's an extensive bibliographic essay at the end of the book incorporating background reading & the sources for each story as well as footnotes.

The story begins with Mickey Chater, wounded at Neuve Chapelle in 1915.  He is bumping around in the back of an ambulance on his way to a Casualty Clearing Station (CCS) after being hit in the face & shoulder. The ambulance driver doesn't know whether to drive fast (when he hits bumps in the road, the wounded are jolted so hard they hit the roof of the ambulance) or slowly (when they feel every little bump & the ambulance might get bogged). When they reach the CCS, Mickey is expected to die. His wounds are so severe that survival seems unlikely. However, he was lucky to be operated on by a pioneer of facial surgery, Charles Valadier, who put his face back together. Valadier even wrote an article on Mickey's case & a copy of this was found in Mickey's papers when he died in 1974. After the war, when Mickey Chater talked about his memories of the War, it was the kindness & dedication of the medical staff who saved his life that he always wanted to emphasize.

William Kelsey Fry was a Regimental Medical Officer with the 7th Division Royal Welsh Fusiliers. As well as medical duties, the RMO was responsible for keeping the men of his battalion healthy & the CCS supplied with fresh water, latrines & supplies. These duties could take up days of his time when there were no wounded to care for. The CCS was the first place that casualties were brought after a battle. Once the men were patched up, they were either sent back to the Front or behind the lines for further treatment & hopefully a trip home for the lucky ones. So, the work would come in waves. The CCS was also liable to be moved at a moment's notice as the battlelines moved. Then, the tasks of finding fresh water, digging latrines & training the stretcher bearer teams would begin all over again. Kelsey Fry & his bearers, Frank Pearce & George Sheasby, were regarded as one of the best teams at the Front. They could be so close to the fighting that they were within hearing of shellfire. Sometimes they worked so hard they didn't hear the shellfire any more. In August 1916, Kelsey Fry & his team found themselves at Guillemont Wood, working in an improvised CCS consisting of a hole hastily dug in the ground with a tarpaulin on top. A shell exploded near the post & both bearers & all the wounded men inside were killed. Kelsey Fry survived but never returned to the Front.

Winifred Kenyon wanted to nurse at the Front. She wanted to really work not just be a glorified housemaid, mopping floors. Her first posting was to the are behind Verdun in the summer of 1915. The CCS was in the middle of nowhere, rows of tents with nurses & orderlies running between them under the open sky. Winifred soon learned that the weather dominated life in the CCS. It was the first thing the nurses thought about when they woke in the morning. Wind, rain, heat, would it be a good day to get the patients' laundry done? Running between tents in the rain meant the possibility of falling in the mud & ruining a clean uniform. Winifred learnt quickly, surprised at how many wards were run by experienced nurses without doctors. She quickly discovered what the acronyms on a patient's ticket meant. The tickets were vital as they stayed with the patient all through his journey from the battlefield to England & allowed medical staff at each stage to quickly treat him without wasting precious time. SI (severely ill) & DI (dangerously ill) meant that the men had little hope of survival. ICT (I can't tell) meant a man was so badly injured that the MO couldn't work out what to treat first. the nurse was meant to clean him up & stabilise him until a surgeon with more time could come back & assess his condition.

Winifred learnt about all the non-nursing duties that were just as important to the patients - a friendly smile & a word of reassurance; being there when a patient came out of an anesthetic; making coffee & sandwiches for overworked colleagues because you happened to be free at that moment. Winifred and the other nurses found themselves acting as social workers to their patients as they recovered if they were distressed by news from home (or no news from home) & they kept themselves sane by walking in the nearby woods in their off-duty hours.

The most poignant stories for me were of the chaplains & padres. These men were not soldiers or medical staff &, on the face of it, they had little reason to be at the Front. However, they could make an extraordinary contribution to the physical as well as spiritual welfare of everyone they came into contact with. Some of the chaplains had quite extraordinary skills which they put to good use. Charles Doudney had worked as a missionary in the Australian outback & he was fascinated by radio technology. He had been constantly tinkering with a radio set in the outback, his only means of communication. Back in England, he soon decided to volunteer for frontline service when the War broke out. His skills in radiology soon made him chief repair man at the base hospital in Rouen & his soldering iron was soon employed in repairing X Ray machines. Soon he was receiving basic medical instruction, administering anesthetics & treating simple wounds without supervision when he was posted to a CCS near Poperinghe. He wrote home to his parishioners telling them of his experiences & asking them to send comforts for the patients like a gramophone. Only when the rush of work stopped could Doudeney resume his duties as a chaplain, although he always felt that he hadn't gone to the Front to preach sermons & hold the hands of dying men. On his way to conduct a burial service in October 1915, the truck he was in was hit by a shell, & Doudeney died on the operating table from his wounds.

There are stories of the courage of stretcher bearers crossing No Man's Land searching for the wounded & nurses on swaying ambulance trains heading for the coast. Too many stories to tell here. Wounded is a beautifully written account of a side of war that is often forgotten in accounts of the movements of armies & the machinations of politics.

I read Wounded courtesy of NetGalley.
Posted by lyn at 12:40 AM