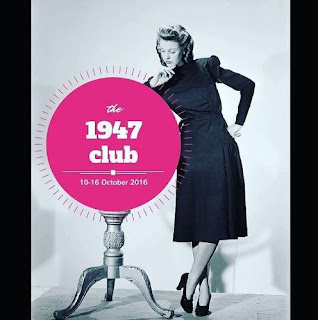 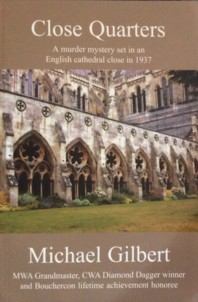 My first choice for the 1947 Club is Michael Gilbert's first novel, Close Quarters. It's an atmospheric murder mystery set in a cathedral close in the years before the Second World War.

The Dean of Melchester Cathedral is concerned about a campaign of anonymous letters targeting the senior verger, Daniel Appledown. Appledown is an elderly man who has held the post for many  years. The letters accuse him of being unfit for the job & of unspecified illicit activities with the wife of a fellow verger. When the incidents become more public - leaflets in the choristers'  music scores & accusations painted on the garden wall, the Dean decides that he needs to consult an expert. The earlier death of Canon Whyte, who fell from the Cathedral Tower a year earlier, is also playing on the Dean's mind. His nephew, Bobby Pollock, is a Detective Sergeant at Scotland Yard & the Dean decides to invite him down for a few days to look into the matter.

When Pollock arrives, the Dean fills him in & describes the residents of the Close. Canons Residentiary, Vicars Choral, Verger & the Choirmaster as well as the Dean, their wives, daughters & servants as well as a black cat called Benjamin Disraeli. There's also Sergeant Brumfit, constable of the Close, who looks after the main gate assisted by his wife & seven children. Pollock begins his investigations, interviewing the other residents & discovering quite a bit about the rivalries & alliances of the inhabitants. Then, Appledown is found dead, murdered by a blow to the head, & Pollock calls in his boss, Inspector Hazlerigg, to assist the local police with the investigation.

The crucial time is around 8pm on the night before Appledown's body is found. Everyone in the Close had a regular routine of Church services & duties with the Choir but there are some interesting anomalies on the night in question. Nosy Mrs Judd (widow of a former resident who has stayed on despite all attempts to move her out) sees everyone who comes & goes through one of the entrances to the Close but even she has to leave her vantage point to eat dinner. Rev Prynne was at the cinema; Rev Malthus was supposed to be visiting his ill sister but he couldn't have caught the train back to Melchester that he claims to have caught; Choirmaster Mickie arrives home & tells his wife that he's just seen a ghost; Appledown's disreputable brother, who lived with him, was out with his Lodge on a regular outing & finished off the evening in the pub. Several members of the community claim to have been in the pub or working alone in their study or only have wives & daughters to give them an alibi. Hazlerigg & Pollock believe that the writer of the anonymous letters is also the murderer but what could be the motive?

"There's a mind behind this business, make no mistake about that. a very fine brain, cool, calculating, and deadly careful. every step, every single step, has been thought out beforehand. I have felt that once - twice - three times already today. ... the calm and clever thoughts of a man confident in his own ability. ... "Not madness but sanity - a sort of terrible sanity. Wne we discover the truth we shall find it as something simple and obvious. Its simplicity will be its strength. No elaboration - no frills - nothing to catch hold of."

I enjoyed Close Quarters very much & it's made me keen to read more of Gilbert's work. This was his first novel & while there may be too many characters to comfortably keep track of (fifty people living in the Close alone although we don't meet all of them), this is an exciting story with multiple red herrings & possible explanations. There are some great set pieces, especially a long chase by train & cab through London by Pollock following one character who, in turn, is following someone else & a long conversation between Hazlerigg & Pollock that lasts into the early hours of the morning as they work through the movements of their suspects. Gilbert's style has plenty of humour & wit,

"Good gracious me, you don't have to be invited. It's a regular Thursday afternoon 'do'. The Chapter take it in turns, and everyone in the Close rolls up and eats sandwiches and lacerates each other's characters, and all in the most Christian way imaginable. You'll regret it all your life if you miss it."

There are definite echoes of Dorothy L Sayers in this mystery, from the elaborate working out of a crossword puzzle to the closed circle of suspects not unlike the similar setting of Gaudy Night. Actually it made me want to immediately reread Gaudy Night & I mean that as a compliment. This is a true mystery of the Golden Age, complete with maps of the Close & a handy list of the main characters. I have a couple of Gilbert's other books on the tbr shelf (one in paper, Blood and Judgement, & the other, The Black Seraphim, an eBook I bought when Christine Poulson recommended Gilbert last year & again it in this great list of books set in Cathedrals). I'm very glad that the 1947 Club inspired me to get this book off the tbr shelves, it was a great mystery & a very enjoyable read. Thank you Simon & Karen.
Posted by lyn at 1:59 AM