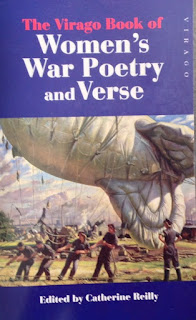 I've just finished reading Frances Faviell's classic memoir, A Chelsea Concerto, & I'm feeling a little bit stunned. I'll be reviewing it later this week when I've had a chance to mull it over a little but I have to say it's the most impressive & compassionate memoir of WWII & the Blitz that I've read.

So, I felt I needed some WWII poetry this week. This is Picture from the Blitz by Lois Clark. Clark drove a stretcher-party car in Brixton during the Blitz & was often among the first to arrive at the site of a bombing.

After all these years
I can still close my eyes and see
her sitting there,
in her big armchair,
grotesque under an open sky,
framed by the jagged lines of her broken house.

Sitting there,
a plump homely person,
steel needles still in her work-rough hands;
grey with dust, stiff with shock,
but breathing,
no blood or distorted limbs;
breathing but stiff with shock,
knitting unravelling on her apron'd knee.

They have taken the stretchers off my car
and I am running
under the pattering flack
over a mangled garden;
treading on something soft
and fighting the rising nausea -
only a far-flung cushion, bleeding feathers.

They lift her gently
out of her great armchair,
tenderly,
under the open sky,
a shock-frozen woman trailing khaki wool.
Posted by lyn at 1:26 AM