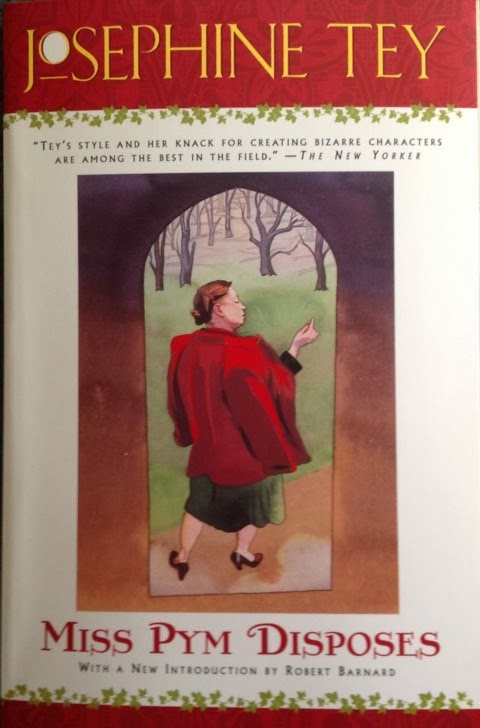 I love Josephine Tey's books & it's been ages since I reread one (apart from The Daughter of Time which I reread at least once a year although that has more to do with my Richard III obsession). Her books are all so different. As well as the Inspector Grant novels she also wrote several books, Brat Farrer, The Franchise Affair & Miss Pym Disposes, that aren't strictly detective novels but all have a mystery or crime at their heart. I bought these lovely US paperback editions a few years ago intending to reread them all but it wasn't until Saturday afternoon that I sat down to begin reading Miss Pym Disposes & didn't move until I'd finished it.

Miss Lucy Pym intended to teach French to schoolgirls all her life but a timely legacy & an interest in psychology led her to write a bestseller & become a minor celebrity. She is invited to give a lecture on psychology at the Leys, a physical training college run by her old schoolfriend, Henrietta Hodge, & finds herself drawn into a self-contained world with all the passions & emotions of the outside world.

The senior class is about to take its final exams & give a Demonstration of their gymnastic skills when Lucy Pym arrives. Intending to stay only one night (she's appalled by the unimaginative food & the horror of a wake-up bell that rings at 5am), Lucy becomes involved in the student's lives & stays on & on. Pamela "Beau" Nash is Head Girl & devoted to her best friend, clever but aloof Mary Innes. The four Disciples (Mathews, Waymark, Lucas & Littlejohn, who finish each others sentences) Irish O'Donnell, the two Scottish girls, Campbell & Stewart, who keep up a centuries old feud & Rouse, who no one much likes. Rouse always manages to say the obvious thing & enjoys the mistakes of others while toadying to Miss Hodge. Then there's the Nut Tart, an exotic Brazilian student, Teresa Desterro, who looks on with amused detachment at her fellow students & the staff.

Lucy enjoys watching the students rehearsing their pieces for the gymnastic & dancing demonstrations, is invited to tea & enjoys walking in the grounds & visiting the nearby village. She is even invited to invigilate an exam & foils a student's planned cheating by destroying her crib notes. Miss Hodge has made the Leys college into a respected institution & she always has several teaching posts at other schools to offer the final year students. This year, there is great excitement as the best girls school in England, Arlinghurst, has asked if there is a Leys student who would be suitable for a post at the school. This is an unheard-of honour for a newly qualified PE teacher & everyone assumes that Mary Innes will be the chosen one. When Miss Hodge offers the post to another student, the scene is set for tragedy.

I remembered the solution of the mystery, even though it must be 20 years since I read it. This time, though, I was able to spot the subtle clues that point to the culprit. Lucy realises that her own actions have helped to create the crisis & has a difficult choice to make once she thinks she knows the truth about the accident that may really have been premeditated murder.

Apart from the mystery, I love the setting & the period of this book. First published in 1947, it nevertheless has a feeling of the 30s. I loved the scene where Lucy & Teresa have tea in the village & meet a couple who turn out to be Mary Innes's parents. Lucy amuses herself by creating a life for these strangers based on her observations of dress & attitude,

It was not often, moreover, that one saw a middle-aged husband and wife so pleased with each other, Lucy thought, as she watched them come in. They had a holiday air. They came in and looked about them expectantly, questioningly... His suit was very old, she noticed; well-pressed and kept, but with that much-cleaned air that overtakes a garment in its old age. The woman's suit, a tweed, was frankly shabby, and her stockings were darned - very neatly darned - at the heels.Her hands, too, looked as if they were accustomed to household tasks, and her fine grey hair was washed at home and unwaved. What had she got to look so happy about, this woman who struggled with straitened means? Was it just being on holiday with a husband she loved? Was it that that gave her grey luminous eyes their almost childlike happiness?

This just conjured up so many middleclass Englishwomen I've read about in those between the wars novels beloved by Persephone & Virago readers & seen in the movies. Laura in Brief Encounter, Mrs Miniver, the Provincial Lady, Ellen Fenwick (from Lettice Cooper's Fenny), Catherine in Elizabeth Cambridge's Hostages to Fortune. Josephine Tey is so good at characterization. I felt I knew the Innes's even though we only meet them briefly in a couple of scenes.

I also love a good mystery set in a closed society like a school or a convent. Gaudy Night by Dorothy L Sayers is my all-time favourite but there are many more. Cat Among the Pigeons by Agatha Christie, Death among the Dons by Janet Neel, Quiet as a Nun by Antonia Fraser, the list goes on. I also have another book on the tbr shelf which I'm tempted to read next. On Your Marks by Gladys Mitchell isn't a murder mystery even though the blurb mentions a couple of minor mysteries that Dame Gladys couldn't resist (who drained the swimming pool?). It's a school story, set in a physical training college like the Leys, one of the many career stories for girls written in the mid twentieth century. It was originally published in 1954 & recently reprinted by Greyladies. Both Mitchell & Tey worked in PE colleges so I'd be interested to see how their pictures differ. But, now that I've started rereading Tey, I'd like to read another of her books as well. Maybe The Singing Sands or the first Inspector Grant novel, The Man in the Queue? Decisions, decisions.

There's a copy of Miss Pym Disposes, and other books by Josephine Tey, available at Anglophile Books.
Posted by lyn at 12:59 AM