Letters to a Friend - Winifred Holtby 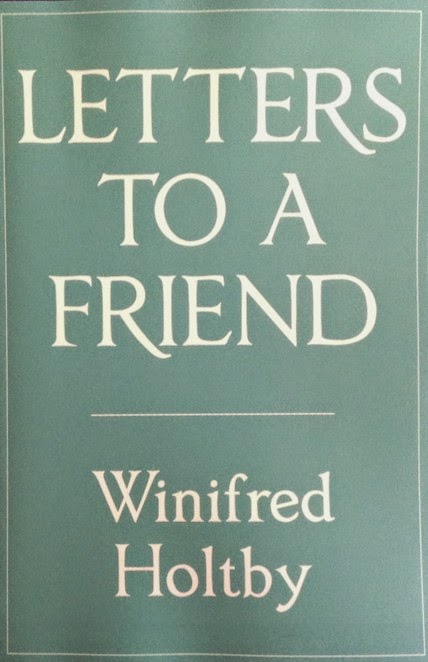 Winifred Holtby is mostly known these days for her final novel, South Riding, which was adapted for television a few years ago. Building on the success of the series, Virago have also reprinted several of her novels, including Anderby Wold. Another novel, The Crowded Street, is in print from Persephone. Thirty years ago, Holtby was probably best known as the friend of Vera Brittain. She featured in Brittain's memoir, Testament of Youth (also adapted for television) & Vera wrote a biography of Winifred, Testament of Friendship, after her early death in 1935 at the age of only 37. Letters to a Friend was first published in 1937 & comprises the letters Winifred wrote to her friend, Jean McWilliam, headmistress of a school in Pretoria.

Winifred Holtby joined the WAAC, the Women's Army Auxiliary Corps in 1918. She was posted to Huchenneville in France as hostel forewoman of a Signals unit. There she met Jean McWilliam, who was the Administrator of the unit & the two became friends. They referred to each other as Rosalind (Jean) & Celia (Winifred) after the cousins in Shakespeare's As You Like It & the correspondence begins in 1920 when Winifred is at Somerville College, Oxford & Jean is teaching in South Africa.

After leaving Oxford, Winifred & Vera Brittain decide to live in London & make a living as writers & teachers. They are also both members of the League of Nations Union (the precursor to the United Nations) & do a lot of unpaid lecturing for the cause. Gradually, Winifred becomes sought after as a teacher & as a journalist. Teaching is a way to pay the bills & she never commits herself to a full time post. Writing is her first love, even when she's discouraged by the difficulties of writing fiction compared to the realities. Her first novel, Anderby Wold, is published but she suffers from the feeling that the book isn't nearly as good as her imaginings while she was writing it. This is a theme of her work as a novelist. Her journalism is published in leading newspapers, including the Manchester Guardian & periodicals such as the feminist weekly, Time and Tide.

Winifred's letters are full of her busy professional life but the overwhelming theme to me was her generosity. She never seems to say no to sitting on a committee, tutoring young women wanting to go to Oxford, doing endless unpaid work for the League of Nations Union & helping anyone in need, from a young returned soldier needing money for his apprenticeship, to a young woman who came to visit her asking for advice because she identified so strongly with Muriel, the protagonist of The Crowded Street . Her family were in Yorkshire & several times she goes home to help in a crisis. Her formidable mother, Alice, was elected as the first woman alderman in Yorkshire & was the model for Mrs Beddows in South Riding.

Above all, the letters are funny. I have post-it notes sticking out all over my copy with passages I want to quote but I don't want this review to be almost as long as the book so I'll just mention a few. This scene is straight out of Barbara Pym's novel, Excellent Women. Doesn't it remind you of the scene when Mildred goes to hear Everard & Helena lecture to the Learned Society?

The Royal Asiatic Society has At Homes in a big library, where you stand round a table in company with scholars and missionaries, and nice, brainless-looking peers who have been to India, and their wives and daughters and sisters. And nobody knows anybody else very well, and everybody seems to cherish a secret suspicion that somebody else is going to eat all the tea first, which would make them inclined to be rude and snatch seed cake from their neighbours, if they weren't at the same time aware that their neighbour might be a celebrity. As an audience, it is sticky. As a tea-fight, it is greedy, unsociable, and a little more undecorative than usual.
January 21st, 1923

Planning a trip to South Africa to visit Jean, Winifred's constant contriving about clothes (one of the delights of the letters) threatens to derail the whole trip.

But I had a horrid shock the other day, reading in the Lady or something an article about South African fashions. ... ' We dress for eleven o'clock tea as for a garden party, and wear full evening dress for dinner every night.' For the Lord's sake, Rosalind, tell me it isn't true. I have exactly one evening dress.It has been dyed and twice renovated. It's already in pieces and I'm spending my autumn dress money on going to the Assembly (of the League of Nations Union) in Geneva again. I thought it might be more useful. This is horrible. Do write and reassure me or I shall paint myself with woad and wear nothing but your feather stole.
August 5th, 1925

Here she's working on her novel, The Land of Green Ginger.

It is queer how one goes on making the better acquaintance with one's characters, just as though they were people. I could no more make mine do what I want them to do, once I have created them, than I could make you do something. They seem to have a complete individual life, and I could follow every word and action and thought of theirs during a whole day if that were artistically possible. The only difficulty is to know what bits to choose and what to leave out. Novel-writing is not creation, it is selection.
October 6th, 1926

The letters were mostly written from 1920-1926. They continue sporadically for the last years of Winifred's life but the friendship seemed to peter out as Winifred grew busier & the sympathy between them lessened. In Marion Shaw's biography of Winifred, The Clear Stream, it's suggested that this volume, edited by Jean & Alice Holtby, was an attempt to regain some control of Winifred's memory from Vera Brittain. Vera had seen South Riding through the press after Winifred's death, against Mrs Holtby's wishes as she was unhappy with her portrayal as Mrs Beddows &, of course, Vera was writing her own account of Winifred's life. No matter how it came about, Letters to a Friend is an absorbing account of a young woman working in London in the 1920s. I loved all the domestic details of Winifred's life as well as the journeys she took & the funny stories she tells of her adventures in the schoolroom & on the lecture platform. I'm so pleased that it has been reprinted.

Mike Walmer kindly sent me Letters to a Friend for review. It's the first in his Belles-Lettres series & I'm looking forward to seeing what other gems he includes in the list.