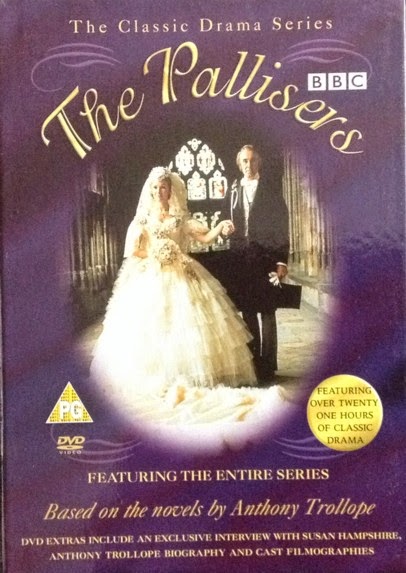 A few weeks ago, I started watching The Pallisers, the 1970's series based on Trollope's Palliser series of novels. I've had the boxset on my shelves for a very long time but it was a comment by a friend in my online book group that inspired me to make a start. I'm absolutely loving it. I read the first four books in the series a very long time ago & was keeping the final two books, The Prime Minister & The Duke's Children, for best. Not sure why, I probably just wanted them in reserve for that day when I have absolutely nothing to read.

Watching the series brought it all back to me. I remembered all the characters & was surprised how much of the story I remembered. Phineas Finn has always been a favorite of mine & I was always very annoyed by silly Lizzie Eustace & watching the series just reinforced my feelings. It's always a joy to watch a British series from this era & seeing so many favourite actors at an earlier stage of their career. I've especially enjoyed Derek Jacobi as Lord Fawn & Penelope Keith as his bossy sister, Mrs Hittaway. Has she always played bossy characters (Margot in The Good Life, Agatha Raisin on the radio)? Must be that very decisive voice that brooks no argument. 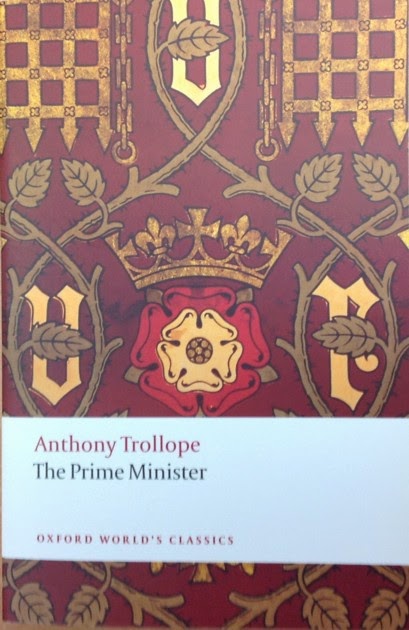 As well as being a story of social & political machinations, The Prime Minister is the story of two marriages. One couple we know well, Plantagenet Palliser, now the Duke of Omnium & his wife, the former Lady Glencora MCluskie. From shaky beginnings, the marriage has become one of love & great happiness although it's not without its problems. Glencora is delighted when Plantagenet becomes Prime Minister, even though he heads a coalition government with all the compromises that entails. As Duke of Omnium, Plantagenet sits in the House of Lords & he misses the more robust debate of the House of Commons. He especially misses his former post as Chancellor of the Exchequer.

To be the Prime Minister's wife is the height of Glencora's ambitions & she has fostered his career by becoming a hostess whose parties attract politicians as well as others with influence. Unfortunately Glencora is still as impulsive as ever &, after many years of marriage, still does not understand the deeply strict moral code of her husband. This causes problems when she encourages Ferdinand Lopez to stand for Parliament in the Palliser family seat of Silverbridge against her husband's wishes. Plantagenet is a difficult man & doesn't always appreciate her efforts on his behalf. He dislikes parties & receptions & has to be pushed into making even a token appearance at Glencora's parties. He's not a natural politician & doesn't have the knack of making himself agreeable to his colleagues. He also doubts that he is the right man to be leader & feels that his social standing has given him opportunities that he's unworthy of. Sir Orlando Drought, who is the Leader of the Government in the Commons, is not sympathetic to Plantagenet & this causes a certain paralysis in the Government.

Glencora does finally begin to understand her husband after the scandal she inadvertently causes puts him in a very difficult position as Prime Minister but his love for her never wavers. I love this conversation between Glencora & her closest friend, Marie Finn (formerly Madame Max Goesler).

"If you and I were hatching treason against him in the dark, and chance had brought him there, he would stop his ears with his fingers. He is all trust, even when he knows that he is being deceived. He is honour complete from head to foot. Ah, it was before you knew me that i tried him the hardest. I never could quite tell you that story, and I won't try it now, but he behaved like a god. I could never tell him what I felt, - but I felt it."
"You ought to love him."
"I do; - but what's the use of it? He is a god, but I am not a goddess; - and then, though he is a god, he is a dry, silent, uncongenial and uncomfortable god. It would have suited me much better to have married a sinner. But then the sinner that I would have married was so irredeemably a scapegrace."

Emily Wharton is the daughter of a wealthy lawyer with family connections to the landed gentry in Herefordshire. She has fallen in love with Ferdinand Lopez, a financial speculator of unknown family & obscure origins. Emily's father does not approve of Lopez & wants Emily to marry a family friend, Arthur Fletcher. Arthur loves Emily but she is determined to marry Lopez although she will not disobey her father. Mr Fletcher's objections to Lopez centre on his background which may be Jewish or may be Portuguese but which boil down to a prejudice against him that may be unreasonable but can't be overcome. Eventually, however, he is forced to give way & Emily marries Lopez.

Almost immediately, Emily realises that she has made a dreadful mistake. Lopez loves her but he also needs her fortune to prop up his very speculative business dealings. He was too careful to antagonise Mr Wharton by asking for a settlement before the marriage but, on their honeymoon, he begins to press Emily to ask her father for money. Emily realises that her husband's moral values are very different to her own. As Lopez's speculations become more entangled, he realises that no matter how rich he becomes or if he succeeds in entering Parliament, he will never be accepted in Society because of his origins.

In a sense he was what is called a gentleman. He knew how to speak, and how to look, how to use a knife and fork, how to dress himself and how to walk. But he had not the faintest notion of the feelings of a gentleman.

The Lopez marriage is the most compelling part of the story. The feints & stratagems that Lopez goes through to keep up appearances while Emily becomes more & more unhappy & frightened of the future are fascinating to watch. Mrs Parker, the wife of Lopez's partner, is one of Trollope's most sympathetic minor characters. She is fierce in her determination to keep her family together as it becomes obvious that her husband has been Lopez's dupe. She visits Emily at her father's house when the bubble has burst & her dignity is heartbreaking as she is forced to ask for help.

Emily is a pitiable but also a very frustrating woman. As her relationship with her husband fractures, she finds herself thinking guiltily about her old love, Arthur Fletcher. When her marriage ends in tragedy, she blames herself for the trouble & scandal brought on her father. She drapes herself in black & seems determined to spend the rest of her life in gloomy atonement for her mistake in marrying Lopez when everyone advised her not to. As her brother Everett says to her, "you make us all unhappy when we look at you." & I could only agree with him. I admit I was very tired of Emily by the end of the book but Trollope brings her story to a very satisfactory ending.

Well, on to the final book in the Palliser series, The Duke's Children. I'm looking forward to watching more of the TV series now that I've finished reading The Prime Minister as Stuart Wilson, one of my favourite actors, plays Ferdinand Lopez. Do you remember him as Vronsky in the 1970s series of Anna Karenina? Another favourite book & favourite TV series.
Posted by lyn at 2:45 AM