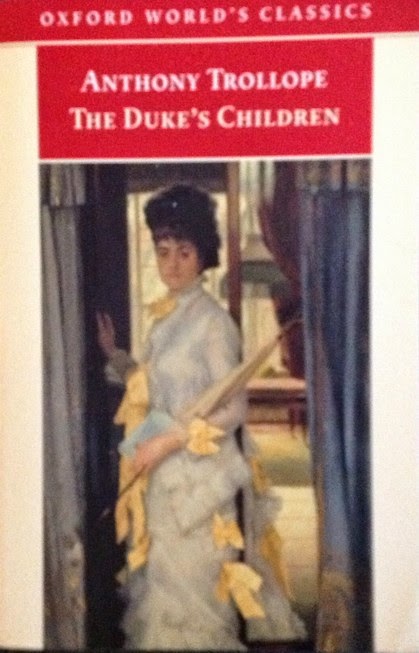 The Duke's Children is the final book in Trollope's Palliser series of novels. It begins with a shock on the very first page, because Glencora, Duchess of Omnium, is dead. Her husband, Plantagenet Palliser, Duke of Omnium, is devastated & the novel describes how he copes with his bereavement & with his three very determined children.

The Duke is a reserved man, consumed by his political career. He loved Glencora very much, after the difficult start to their marriage, but he barely knows his children at all. He has provided for them in a material sense but doesn't understand them. Eldest son, Plantagenet (but always called Silverbridge after his title), has been sent down from Oxford & declares that he wants to enter Parliament as a Conservative. As the Pallisers have always been Liberals, this wounds his father deeply. The Duke blames Silverbridge's closest friend, Frank Tregear, for his decision. Tregear is from a Cornish gentry family but has no money. Unfortunately, he has fallen in love with Silverbridge's sister, Lady Mary Palliser, & she with him, a match that the Duke absolutely forbids. Middle son, Gerald, is at Cambridge but is caught up in a gambling scandal while still in his teens.

Silverbridge falls in love with Lady Mabel Grex, a distant cousin of both his & Frank Tregear's. Frank & Mabel had been in love but both realised they could not marry as neither had any money. Mabel's father may be a Lord, but he has gambled & squandered his estate so she is practically penniless, although well-bred, beautiful & witty. Mabel is still in love with Frank but determines to marry Silverbridge if he makes her an offer. Unfortunately, her own worst (or maybe best) instincts lead her to let him off the hook when he makes a tentative declaration. He feels slighted &, soon after, falls under the spell of a beautiful American, Isabel Boncassen. However, the Duke has given his approval to Silverbridge's pursuit of Mabel so Silverbridge finds himself avoiding one girl while he pursues another. The Duke, meantime, is favouring Mabel & wondering when Silverbridge will announce their engagement.

Mary, meanwhile, is devastated when her father forbids her marriage to Frank. She agrees to do nothing without her father's permission, but is determined to marry no one else. The Duke can't help but remember Glencora's own passion for Burgo Fitzgerald, & wonder if she would have been happier if she had not been forced into a marriage with a man she didn't love. Mary's situation leads to a rift between the Duke & Marie Finn (formerly Madame Goesler), Glencora's greatest friend, as she treads a fine line between her loyalty to the Duke & helping Mary without becoming estranged from her.

Silverbridge's troubles aren't confined to romance. He becomes involved with a racing set that includes Major Tifto, a man who knows a lot about horses but isn't quite respectable or honest. Silverbridge is led into huge losses at the race track, & scandal when a horse he part owns with the Major is nobbled just before a big race. Silverbridge is also becoming dissatisfied with his political career as he despises the leader of his party, Sir Timothy Beeswax, & finds himself reluctant to support him. The Duke, meanwhile, is in despair. His heir has shown himself to be flighty in love, a gambler who consorts with undesirable people & a Conservative in politics, although he doesn't seem very serious about that. His daughter is stubbornly continuing to love a penniless man while ignoring any eligible suitor who comes her way. He loves his children & wants them to be happy but he comes to realise that the old standards that he has lived by are changing & he must change too.

The Duke's Children is a wonderful book. The Duke is such a lovable man & his bewilderment as his children get into one predicament after another is very poignant. He misses Glencora but also realises that she has contributed to the problems as she approved of Frank Tregear's suit & he sees her wilfulness intensified in Mary. There are painful scenes between the Duke & Mary as she remains resolute & also many comic scenes between the Duke & his sons as they almost seem to speak different languages & almost wilfully misunderstand each other. Silverbridge is a very silly, immature young man but all his difficulties seem to come upon him unawares. He loves & respects his father but is also afraid of disappointing him. He is full of good intentions but doesn't have the strength of character to follow through. He finds himself entangled without knowing how it happened.

Mabel & Isabel are both fascinating characters & much more mature & self-aware than Silverbridge. Mabel knows how much her future depends on a "good" marriage but she is not mercenary enough to take a man she doesn't love. Even as she decides to accept Silverbridge when he asks her, she is determined to be a good wife to him & try to love him. She knows she can be a good wife & can behave as a Countess (& eventually a Duchess) should but her honesty looks set to ruin her chances. Isabel is very aware of her position as an outsider & has enough good sense not to accept Silverbridge's proposal until she is accepted by his family. The Duke may be a Liberal politically but his feelings about family & nobility are very conservative. The Duke's Children is an involving family saga that rounds off the Palliser series in a very satisfying way. And, now that I've finished reading the books, I can get back to the TV series & watch the last three episodes.
Posted by lyn at 2:45 AM