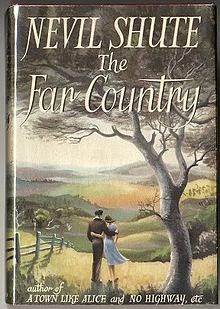 This is a story about old & new countries, about starting a new life, either forced by circumstance or as a free choice. The Far Country (picture from here) is set in Australia & Britain in the early 1950s.

Jane Dorman scandalised her family in 1918 by marrying an Australian soldier & coming out to Australia to start a new life. Only her Aunt Ethel supported her. Now, in the years after WWII, Jane & Jack Dorman have made a success of their sheep farm near Merrijig, in the High Country of Victoria, near Mt Buller. Jane has become concerned about Aunt Ethel, who is surviving on a widow's pension from her husband's Indian Civil Service career. After the Dormans receive a substantial wool cheque, Jane sends her aunt £500. The money arrives as the old lady is dying of malnutrition, too proud to ask her daughter for help when her pension stops. She's been surviving by selling her furniture & eating the dried fruit in the parcels Jane has been sending her but finally she collapses in the street & her family is notified.

Ethel's granddaughter, Jennifer Morton, is working in London, having left her parents' home in Leicester. She's called in to look after her grandmother & Ethel gives her the money, telling her to go out to Australia & visit the Dormans. Life in England is grey & gloomy, with rationing still in place & the costs of everything rising. Jenny decides to go & she is warmly welcomed by the Dormans. Australia is a revelation to her. The abundance of food, the kindness of the people & the beauty of the country around Lenora homestead are such a contrast to her mundane life in London.

Carl Zlinter has emigrated to Australia from Europe after the war. He was a doctor in Czechoslovakia but he is not allowed to practice in Australia without undertaking further training. Carl was an Army doctor during the War & ended up in a displaced persons camp as he didn't want to return to a Communist Czechoslovakia. He must work for two years at a lumber camp near Mt Buller before he can make his own way. Carl is a quiet man in his early thirties. He enjoys the outdoor work, the country reminds him of the Bohemian forests of his home, & he can go fishing at the weekends. He is also the unofficial doctor at the camp. The manager allows him to treat the men's minor injuries & keeps him supplied with medications & bandages.

Carl meets Jenny & the Dormans when an accident at the timber yard leaves two men seriously injured. Jenny helps him to perform the operations & Carl is invited to visit Lenora. As they get to know each other, Jenny & Carl grow close. Carl discovers that a relation of his with the same name, Charlie Zlinter, was a bullock driver at a small gold rush town in the mountains fifty years before. He finds Charlie's grave while on a fishing trip & tries to find out more about him. He realises that he will not be able to afford to retrain as a doctor when his two years is over & decides that he will keep working at the timber mill & build himself a hut on the site of Charlie's house from so long ago. However, Carl & Jenny's relationship faces challenges when Jenny's mother dies & she decides to return to England.

I loved The Far Country. I've read several Nevil Shute novels but I have more on the tbr shelves & can't wait to read them. Shute's love of Australia is evident in every line. He has some very harsh things to say about post-war Britain & the National Health Service in particular & the contrast between the old & new countries is very stark. The plenty of the Dormans with their prosperous farm & the rising price of wool promising more in future years is starkly contrasted with the poverty of those back Home in England. I enjoyed the picture of Melbourne in the 50s when the Dormans visit to spend their wool cheque & Jane's search for the right picture to put on her wall now that she has the money to afford it. At the centre of the story though is the tender relationship between Carl & Jenny. The days that they spend exploring the high country are so beautifully described, the peace & beauty of the bush is the perfect background to their discovery of each other & of the possibility of a new way of life & a new home.

Carl's experience as a New Australian (which is one of the more polite names the post-war European immigrants were called) could be reflected in many more stories of that time. Australia became a multicultural country thanks to the migrants who left Europe in the 1950s. They were grateful for the chance of a new life & we were grateful to have the labour. In some ways, the novel shows a rose-coloured view of the migrant experience. There were lots of cases of exploitation as well as stories of friendship & support. I don't want to get too political but I wish our current government could emulate this more humane refugee policy. 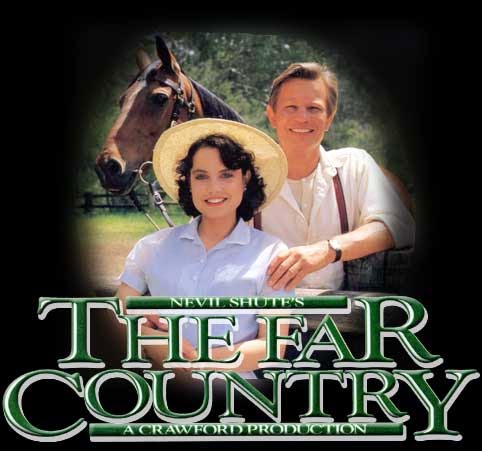 I listened to The Far Country on audio, read by Julie Maisey. She did a good job with the Australian accent, supposedly one of the most difficult accents to do, & I enjoyed it very much. I chose the lovely cover photo of the first Heinemann edition because it's so beautiful, but the cover image I remember best is this one from the edition that was reprinted for the1980s mini series with Sigrid Thornton & Michael York. Although, having read the synopsis of the TV series & a couple of reviews, I'm glad I have no memory of the series! It seems to have been sensationalised & to have very little relation to the novel.
Posted by lyn at 2:26 AM