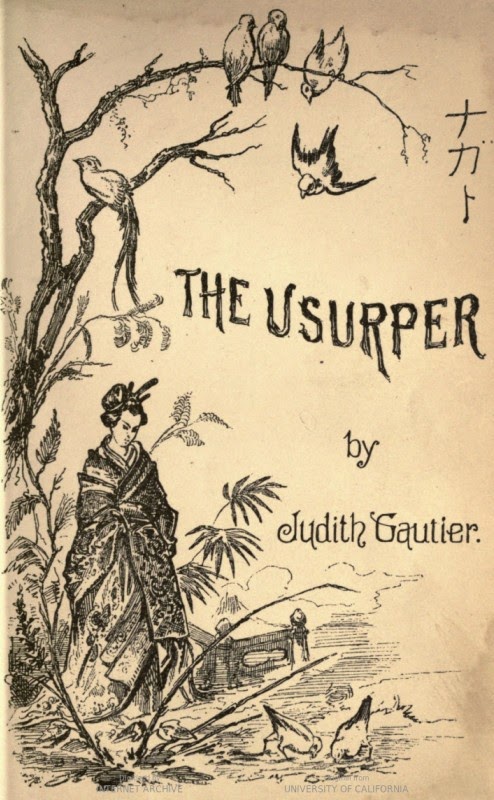 This novel has it all. Set in 17th century Japan, it's a story of intrigue & betrayal at the highest levels of society. It's adventurous, heart-stopping & has a poignant love triangle as well as a romantic quest at its centre. The Usurper (cover picture from here) was written by Judith Gautier, daughter of the poet & writer Théophile Gautier. She wrote several novels using her expertise as a scholar of China & Japan. I had never heard of Judith or this novel until it was suggested for my 19th century bookgroup. Yet another fascinating book that would have passed me by if not for the wide reading of the members of the group.

The Mikado, more god than emperor, reigns over Japan but the actual rulers of the country are the Shoguns. One of these, Fide-Yori, is a young man whose duties have been carried out by Hieyas, an ambitious older man who is called the Regent although he does hold the title of Shogun. Hieyas is content for Fide-Yori to spend his time hunting with his friends, including his closest companion Iwakura, Prince of Nagato. Hieyas is Nagato's enemy & tries to kill him several times, however, his plans are unsuccessful. When Nagato appears at a Council meeting with a letter from the Mikado requesting that Hieyas step aside, Hieyas realises that he has no choice & steps down. Nagato counsels the Shogun to sign Hieyas' death warrant as he will certainly not do the honourable thing & commit suicide but Hieyas escapes to his own estate & the opportunity is lost.

Hieyas decides that he is no longer willing to forgo the title of Shogun. It's a hereditary title & he wants to bequeath it to his son. He attempts to murder Fide-Yori but his plot is discovered by a young woman, Omiti, who warns the Shogun & Nagato averts the crisis. The Shogun is entranced by Omiti & is determined to make her his wife. However, she has disappeared. Hieyas instructs his son to spread discontent among the other nobles while he fortifies his stronghold with his supporters & plans his next attack. Nagato & the Shogun, Fide-Yori, gather their forces & plan their strategy. A young man, Sado, who bears a resemblance to Nagato, creates a diversion while Nagato gathers a fleet of fishermen to carry out an audacious strike at the heart of Hieyas' forces.

The Kisaki has commanded Nagato to marry Fatkoura. He is reluctant but realises that there is no future for his relationship with the Kisaki. His attentions to Fatkoura before he fell in love with the Kisaki have given rise to gossip & the only honourable way to silence the talk is to marry the young woman. Fatkoura travels to Nagato's home & is kindly received by his father. However, Hieyas' forces attack the castle & Fatkoura is abducted by the Prince of Tosa, one of Hieyas' allies. Tosa falls in love with Fatkoura & hopes she will marry him but she is contemptuous even though her feelings for Nagato swing from love to jealous hatred. Tosa's forces defeat an army led by Sado masquerading as Nagato. Sado is captured & brought to Tosa's fortress. He is not allowed to honourably commit suicide & is beheaded. His head is taken to Hieyas as a trophy. Fatkoura has discovered that the captive is not Nagato but her attempts to rescue him are foiled by Tosa who forces her to watch the execution.

Fatkoura's imprisonment becomes stricter as she continues to resist Tosa's advances. A crisis is reached when Nagato's army lays siege to Tosa's palace.The victory of Fide-Yori is celebrated with a gala theatrical performance but there are disgruntled murmurings among the working people at the  extravagance of the aristocrats, especially Fide-Yori's vain, thoughtless mother, & another rebellion is only narrowly averted. Fide-Yori has become disheartened by his fruitless quest to find Omiti & has neglected his official duties & care of his subjects. The final battle between the forces of Hieyas & Fide-Yori will decide the future of Japan.

This is such an exciting story although I must admit that I was finding the story quite slow going until Hieyas' rebellion begins. The scenes at Court & at the Kisaki's summer residence are beautifully described but so formal & stylized that I was feeling impatient although the formally polite language & ritual very effectively highlighted just how impolite & murderous the protagonists were really feeling. The central love triangle is beautifully done. I really felt the Kisaki's misery at her circumscribed life. Every move she made was watched & her every utterance scrutinized for meaning. It reminded me of the stories about Crown Princess Masako, who married the Crown Prince in 1993. The isolation of the Imperial family is highlighted by a scene where the Mikado, an enormously fat young man, moans about his loneliness & boredom. Because the Mikado is treated as a god rather than a human being, he is at liberty to do anything or nothing & usually does nothing. His relationship with his wife, the Kisaki, is formal & distant; they seem to live completely separate lives. His servants are not even allowed to suggest meals to the Emperor so he has 33 different meals prepared every day in 33 rooms & walks from one room to the next until he finds something he fancies.

Nagato is a resourceful hero. His scheme to scupper Hieyas' navy is bold & carried out with courage. He is also completely loyal to the Shogun Fide-Yori & inspires loyalty in his followers. The tragedy of Nagato's impossible love for the Kisaki is the great sorrow of his life which never leaves him & he also feels some guilt for Fatkoura's fate.

There are elements of fairy story in The Usurper, particularly in the quest of Fide-Yori to find Omiti. There are also echoes of the Arthurian legends in the story of Nagato, Fatkoura & the Kisaki. I wondered if those elements were in the original story or whether Gautier added them. There are some beautiful set pieces in the book - the picnic at the summer residence & a later visit to the theatre. However, I also felt that Gautier had crammed in every bit of research she had done. I found it all fascinating because I know very little about Japanese culture but it did slow the novel down.
Posted by lyn at 3:41 AM