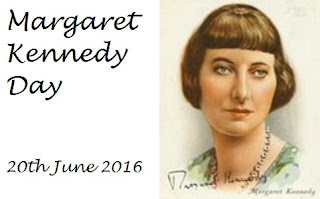 Roy Collins is a scriptwriter with B.B.B, a major English film studio. He has ambitions to write & direct his own scripts but his current assignment is to work on the shooting script for a historical picture selected for one of the studio's leading stars, Kitty Fletcher. Dorothea Harding was a Victorian lady writer of children's stories & twee poetry. After her death, however, a diary & passionate poetry was discovered & literary critics, including Alec Mundy, interpreted the poems as an expression of illicit love between Dorothea & her brother-in-law, Grant Forrester. Grant's early death was seen as suicidal despair over the impossibility of his love for Dorothea. Mundy's biography was the basis of a play by Adelaide Lassiter, a writer of sentimental platitudes who calls Dorothea Doda & is now writing the screenplay for the movie.

Adelaide wants to absorb the atmosphere of Bramstock, Dorothea's home which is still owned by members of the Harding family so she goes down to see the house, accompanied by Roy, Mundy & hanger-on Basil Cope. Now very hard up, the Hardings have reluctantly agreed to allow their house to be used for the filming, knowing that the money will pay for daughter Cecilia's college education. Cecilia is proud & resentful of the whole idea, dismissing Dorothea's work as Victorian tosh but she becomes interested in Roy despite looking down on his origins (his aunt lives in the village where the Hardings are the local squires) & what she perceives as his lack of ambition. Roy begins to feel an affinity with Dorothea as he walks around the grounds of Bramstock & begins to realise that the sentimental story of her life is wrong. He becomes determined to stop the movie from going ahead because he feels somehow akin to Dorothea & protective of her story.

But it's not Cecilia's fault that she doesn't understand, thought Roy. None of them do. They all think it's their job to tell us what to put. And we have to laugh it off.
They, to him, were the entire human race. We were Dorothea Harding, himself, and a myriad nameless others, swimming, sinking, fighting for life, in the same inclement ocean.
He lifted his head, smiled, and went back to the hotel in better spirits than he had known for many a day, sensible that he had, after all, got company.

Another descendant of the Harding family, Shattock, is in possession of potentially explosive documents that could change the image of Dorothea as the Victorian poetess & potentially scupper the making of the movie. The central section of the book takes us back to the time of Dorothea herself & we learn just how mistaken the ideas of biographers can be as the truth of her life & the reason she wrote her inane but successful novels becomes clear.

The Wild Swan is a novel that reminded me of other books about writers & their literary afterlives. Like A S Byatt's Possession & Carol Shields' Mary Swann, the central conceit of a writer from the past whose life has been misinterpreted & taken over by modern academics is one that has always fascinated me. The idea that we can ever really know a person from another age, no matter how much material they leave behind is fraught with danger. Material is always turning up & there are plenty of real life examples as well as fictional ones. Charlotte Brontë's letters to Monsieur Heger are probably the most famous example but there are plenty of gaps in our knowledge of historical figures that novelists & playwrights have tried to fill in & sometimes their version becomes the truth.

I enjoyed seeing the real Dorothea, who was a much tougher, more resilient woman than her admirers imagined. Her life was circumscribed by the duties of a Victorian daughter. She was able to get on with her writing & go her own way while her older sister, Mary, was at home. Mary's marriage to Grant will be the catalyst that reluctantly forces Dorothea into the role of housekeeper to her demanding father. Her invalid brother & his wife & children also live at Bramstock & Dorothea's relationship with her sister-in-law, Selina, is difficult. Dorothea's cousin, Effie Creighton, is sympathetic, & as one of the few people who know about Clone, the imaginary world Dorothea & her sister invented as children, she understands how important Dorothea's work is to her. However, her mother does not approve of Dorothea & eventually marriage takes Effie away. The rector, Mr Winthorpe, is seen as a benign presence & an influence on Dorothea's writing by Mundy but his desire to control Dorothea is typical of a conventionally Victorian moral world. He's disconcerted by Dorothea's unusual self-possession & tries to persuade her into a more conventional role while he fears that she is secretly laughing at him.

The contemporary story was also fascinating. Written in 1957, it's set in that awkward post-war period when upper & middle class families were having to adjust their expectations. The Hardings are still the local squires but they're poor. Cecilia may still boss around the women of the local W.I but Bramstock is rundown & she knows her father can't afford to send her to college. The offer from the film company is embraced by Cecilia's practical mother although her father is horrified by the implication of stooping to the depths of taking money from something as vulgar as a movie company & about a family member at that. Cecilia's contempt for Roy (her father initially mistakes him for "the plumber's mate" & Cecilia calls him that in her mind for quite a while) changes to interest as she discovers more about him. When she learns that he's written an avant garde short film that she's seen & enjoyed, she has to reassess her prejudices & finds herself liking him quite a lot. Roy's feelings for her are more ambiguous. I also enjoyed the pompous Mundy & his superior attitude to Adelaide's play while she was much more like the accepted image of Dorothea than the real woman could ever have been. Everyone has an image of Dorothea in their minds that suits their own plans but the truth will surprise them all.

Thank you to Jane at Beyond Eden Rock for hosting Margaret Kennedy Day. It was a great incentive to read another of her novels.
Posted by lyn at 1:18 AM