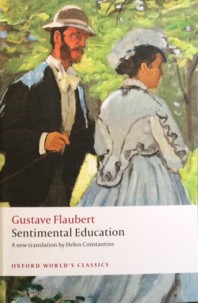 For certain men the stronger their desire, the less likely they are to act. Lack of self-confidence holds them back, they are terrified of giving offence. Moreover, deep affections are like respectable women; they are afraid of being found out and go through life with their eyes cast down.

Frédéric Moreau is a romantic young ditherer. Sent by his mother to stay with a rich uncle, with a view to being mentioned in his will, he is returning home with no definite plans & no promise of an inheritance. On the journey home, Frédéric falls in love at first sight with Madame Arnoux, wife of an art dealer. All he can think about is getting to Paris to pursue her. He goes to Paris to study law, visiting Arnoux in his shop but unable to either declare himself to Madame or to stop visiting. His schoolfriend, Deslauriers, comes to Paris & they share rooms, mostly at Frédéric's expense. Through Deslauriers, Frédéric meets a group of radical writers & artists. His studies suffer & he still hasn't made an impression on Madame Arnoux.

Frédéric returns home discouraged & already half-forgetting Madame but then receives a letter informing him that his uncle has died intestate & he has inherited a substantial fortune. Immediately, all his plans for a sober provincial future are overturned. He's desperate to return to Paris. His mother thinks that a political or diplomatic career will now be open to him & urges him to make the acquaintance of the local landowner, Monsieur Dambreuse. Frédéric's return to Paris leads to a whirl of partying & he meets a courtesan, Rosanette, known as the Maréchale, who is Jacques Arnoux's mistress. Maréchale is attracted to Rosanette but still yearning for Madame Arnoux.

The company of these two women made a sort of twofold music in his life: one was playful, violent, entertaining; the other serious and almost religious. And the two melodies playing at the same time steadily swelled and became gradually intertwined. For if Madame Arnoux brushed him with her finger, the image of the other woman appeared before him as an object of desire, because he had more of a chance with her. And when in Rosanette's company his emotions happened to be stirred, he immediately remembered his one true love.

His friendship with the Arnouxs leads him into financial commitments & Deslauriers is also pressuring him to invest in a radical newspaper. Frédéric becomes almost a companion to the Maréchale, taking her to the races, paying for her portrait to be painted but he is not her lover, he's too timid to demand more than a few kisses. The Maréchale is offended by his apparent lack of interest but she's juggling several lovers so just accepts his companionship & his presents.

Frédéric is invited to the Dambreuse's home & he is impressed by the splendour of their lifestyle but he fails to take up any of Dambreuse's suggestions or invitations to invest with him & so again, he drifts along. When he does make money on an investment, he waits too long to sell his shares & loses again. His income diminishes & he continues to sell property while he loans money to Arnoux, who has sold his art dealership & is now running a porcelain factory. Frédéric's options are to find work, to spend less, or to make a rich marriage.

Frédéric's mother wants him to marry Louise Roque, the daughter of Monsieur Dambreuse's agent. Louise has been infatuated with Frédéric since she was a child & she is now a woman & an heiress. Again, he dissembles & can't commit himself to Louise while he's still in love with Madame Arnoux & lusting after the Maréchale, whom he finally makes his mistress. Marie Arnoux has discovered her husband's infidelities & she realises that she has fallen in love with Frédéric & then Madame Dambreuse, a haughty but attractive woman, begins to take an interest in him as well. Frédéric sees her as a challenge & the fact that she's wealthy is an added incentive.

He read her pages of poetry, putting all his soul into it, to move her and to win her admiration. She would stop him with a critical remark or a practical observation; and their conversation reverted constantly to the eternal question of Love. They wondered what occasioned it, whether women felt it more than men, what were the differences between them on that subject. Frédéric tried to express his opinion, avoiding both vulgarity and banality. It became a kind of battle, pleasant at times and tedious at others.

Frédéric's sentimental education begins conventionally enough - a young man falling in love with the first attractive older woman he meets - but it takes many twists & turns & although he's meant to be receiving an education in love & life, Frédéric seems to learn very little through the course of the novel. Will he be able to take the happiness that he's wanted for so long? Or will his constant indecision be his downfall? Maybe Frédéric's experiences are more realistic than those of many characters in fiction who seem to have a plan for their lives. All Frédéric's plans go awry which may be more true to life where plans often fall apart & leave a mess that has to be lived with.

Sentimental Education is a funny, cynical portrait of French society in the years leading up to the 1848 Revolution. Frédéric's inability to make a decision about anything & his misunderstandings with everyone he meets are amusing but also frustrating. His idealism leads him into one mess after another as his motives are misrepresented time & again. Madame Arnoux sees him as a kind young man; Arnoux as his friend who is helping to keep the knowledge of his affairs from his wife; the Maréchale sees him as a ready source of fun; Louise sees him as a chivalrous hero of romance; his mother sees him as a future Cabinet Minister. He lurches from one disaster to another either financial or romantic. He fights a ridiculous duel over an insult to Madame Arnoux but the Maréchale thinks he's saving her reputation while Arnoux thinks it's in his defence.

There are some great set scenes - the day at the races, the dinner party at the Dambreuses, the duel, the party where Frédéric first meets the Maréchale - that contrast with the poverty of students like Deslauriers & the journalists & artists in his circle. Then there's the radical element, men like the engineer Sénécal who is arrested for conspiring to assassinate King Louis-Phillippe. As the 1848 Revolution unfolds, Frédéric becomes even more of a bystander to events as he & the Maréchale escape Paris for a country idyll that can't last. His desire for approval from his friends paralyses him & whatever moral strength he may once have had just slips away as he juggles mistresses, potential wives & possible careers. In one farcical scene, he only just prevents Madame Arnoux & the Maréchale from meeting in his rooms & his selfishness is exposed in his relations with both Louise Roque & Madame Dambreuse as well as his remoteness from the political concerns of his friends. It's a fascinating novel & it's good to be able to read more Flaubert who is mostly remembered now for just one book, Madame Bovary.

Oxford University Press kindly sent me a review copy of Sentimental Education in a new translation by Helen Constantine.
Posted by lyn at 2:04 AM