One Under - Cynthia Harrod-Eagles 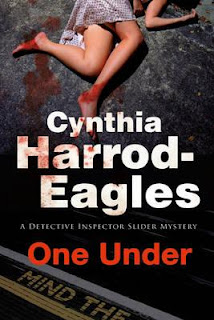 I seem to be regaining my interest in detective fiction. I used to read a lot of series but I seem to have cut back to only a few favourites. It would be easier to keep up if I could stop myself becoming interested in new subjects. Ancient history is my latest interest. I read Mary Beard's wonderful account of Roman history, SPQR, earlier this year & I've become fascinated by a period I know very little about. However, I've just finished watching Series 9 of Lewis & that reminded me that I hadn't read the latest book in Cynthia Harrod-Eagles' Bill Slider series.

Two deaths, seemingly unconnected. Jim Atherton is called to a death at an Underground station, known as a "one under". It seems to be an uncomplicated suicide. CCTV shows the man jumping in front of the train. There's no one near him, he wasn't pushed, he didn't trip. George Peloponnos was in his late forties, living with his elderly mother, & working for the North Kensington Regeneration Trust. There seemed to be no reason for him to kill himself. On the same day, DI Bill Slider & the rest of his team are at the funeral of another suicide, their colleague, Colin Hollis. The atmosphere of misery at the funeral suits Slider's mood, the guilt he feels at not being able to help Hollis & also the unresolved feelings he has about the loss of the baby his wife, Joanna, was carrying. The baby would have been due around this time.

Slider goes to the scene of another death, on the patch of another station, because the dead girl, Kaylee Adams, lived on a housing estate in Shepherds Bush. Kaylee was found in a ditch by the side of a country road, apparently the victim of a hit & run driver. However, forensic pathologist Freddie Cameron isn't happy with her injuries & doesn't think she was hit by a car. Then there's the absence of Kaylee's bag & phone & why were her knickers on inside out & her shoes found some distance away? Kaylee lived with her younger sister & her mother, who was more concerned with her boyfriends & her next drink than caring for her daughters. When Slider discovers that Kaylee had known another girl, Tyler Vance, who was found drowned, he is determined to find out what happened to her & prevent her death becoming just another statistic.

Cynthia Harrod-Eagles' Bill Slider series are terrific police procedurals. I love the way the reader follows the investigation step by step & makes the discoveries along with the investigating team. This is a long running series (no 19, Old Bones, is published early next year) & Slider's team have become old friends. The painstaking investigation, with flashes of intuition & the odd hunch, draws me in & never lets go. The first death, the suicide of George Peloponnos, seems to be straightforward, but, as a seasoned reader of police procedurals, I knew there had to be a connection. When it was revealed, it was shocking but also incredibly sad. Slider is a decent man, caught between the dictates of his conscience & the struggle to justify a seemingly hopeless investigation when the powers that be control the funding. Even when he is explicitly warned off the investigation, he keeps plugging away, finding other ways to pursue the threads of the story, determined not to give up.

The other aspect of the series that I love is the humour & wit. The chapter headings are often puns & Slider's boss, Porson, can't open his mouth without uttering a malapropism. Slider's personal life is as important as his work. His musician wife, Joanna, still recovering emotionally from the miscarriage but back at work & enjoying it. His father, living next door with his second wife & a willing babysitter for young George, his namesake. There was less emphasis on the personal in this book but I think Harrod-Eagles strikes the right balance. There's even a further instalment of Atherton's fraught love life as he tries to keep up the playboy facade after the departure of Emily, his most serious girlfriend. I read One Under in a weekend & I'm looking forward to the next book in the series. Now that I'm back on the mystery bandwagon, I wonder what will be next?
Posted by lyn at 2:48 AM