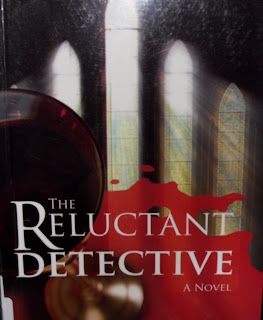 Faith Morgan is a woman in her 30s, recently ordained after a career in the police force that became unsatisfying once she felt a vocation for the Church. As well as a career, Faith also left behind a serious relationship with Detective Inspector Ben Shorter. Faith has been working in an inner-city parish but is interested in moving to a rural parish. Little Worthy is a quiet village near Winchester. Faith knows the village from childhood holidays & is feeling a little nostalgic as she arrives on a Sunday morning just before the service begins. Her hopes of remaining anonymous are immediately dashed by the beady eyes of churchwarden, Pat Montesque, who catches the glint of her cross on the collar of her dress & moves in to find out everything about Faith in ten minutes or less. The incumbent, Alistair Ingram, is about to retire because of ill-health & the parish of St James’s would be a new challenge for Faith.

Faith’s nostalgic pleasure in the church is shattered when Alistair Ingram collapses & dies during Communion. Her police training takes over as she rushes to offer help but she soon realises that this may not be a simple death from a heart attack but something more sinister. Her instincts are correct. Ingram was poisoned. She’s disconcerted but not surprised when Ben Shorter arrives to head the investigation team. Their relationship foundered on his inability to understand her vocation & also his involvement in another case that went wrong. The details of this case are unclear but Ben obviously disappointed Faith in his handling of a vulnerable suspect & their relationship never recovered.

Faith is asked to fill in as Vicar of St James’s until a new incumbent is appointed & she finds herself becoming more & more involved with the parish & her new parishioners. She can’t stop herself doing a little investigating. Could the answer lie in Ingram’s past life as a financial consultant? In his spiky relationship with his son, Don? In his relationship with a divorced parishioner? Or was the dispute with a neighbouring farmer over a piece of land enough to push the farmer, a troubled loner, over the edge? There are lots of motives & suspects to mull over, maybe too many, & I picked up enough clues to work out the murderer, but it didn’t matter. I loved this book. I read it in an afternoon. I loved the atmosphere of the rural parish, the characters of the other clergy, including a particularly unpleasant press officer & Faith’s mentor, Canon Jonathan, who makes a brief appearance.

Faith herself is a character I’m looking forward to meeting again. She's still finding her way in her new life but she has a genuine desire to make a difference & be a spiritual guide to her parishioners. Her relationship with Ben is still smouldering & it will be interesting to see where Ockley takes them in the next book in the series. Martha Ockley is the pen name of Rebecca Jenkins who has a website here. She has written a series of Regency mysteries as well as non-fiction. It’s no wonder that the clerical atmosphere & politics are spot-on as she’s the daughter of the Rt Revd David Jenkins, former Bishop of Durham.
Posted by lyn at 7:42 AM