A Boy at the Hogarth Press - Richard Kennedy 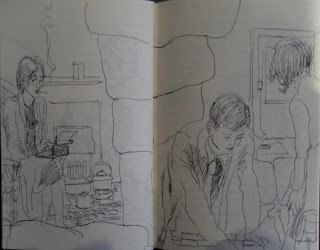 Richard Kennedy was apprenticed to Leonard Woolf at the Hogarth Press in the 1920s. Kennedy's Uncle George got him the job as a kind of second chance for the 16 year old to prove himself. Over 40 years later, Kennedy recalled the two years he spent at the Press in this memoir. Richard Kennedy went on to become an illustrator & the book is full of his quirky line-drawings. The memoir is short, less than 100pp, but full of incident. Richard spends hours typing a short letter, only to spell accept as except & bring Leonard's wrath down on his head. He tries to be helpful by putting up a shelf to make the packing of books & leaflets more efficient. Unfortunately the shelf later collapses as Leonard & Lord Oliver sit under it.

They sat down facing us in two chairs and launched into a very profound conversation about Africa, during which I was aware of a series of creaks and then a sudden crack and, looking up, saw my shelf suddenly dip down at the corner. One or two leaflets floated gracefully down and alighted at the feet of the two men. But they continued their conversation. Another crack, the shelf dipped ominously again and more leaflets glided down, covering the carpet. But the two men continued unconcernedly puffing their pipes. ... Then, like a ship sinking, the shelf slowly started to subside, leaflets pouring off and floating down like snow flakes. I watched helplessly as they cascaded on to LW and Lord Oliver, burying them almost to their knees. They calmly rose, as if nothing had occurred, shook themselves and silently went upstairs. 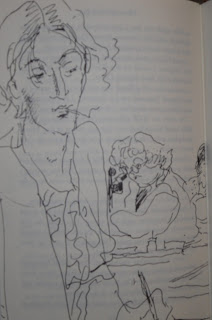 I loved all the detail of the work of the Press. Packing up orders, the office politics & the suitability of Richard asking a young woman he works with to lunch (they are very soon put on different lunch breaks). The glimpses of Virginia are fascinating. Sitting with a typewriter on her knees as in the picture above (surely the most uncomfortable way to type), peering through the glass panel in the basement window, setting type while continually smoking her roll-up cigarettes. When Richard is given a manuscript by Ivy Compton-Burnett & asked to do a reader's report on it, he is thrilled. He consults his Uncle George who proclaims it a work of genius & that's what his report says. Leonard is dismissive & rejects the novel which is later published by another publisher & widely reviewed as a work of genius. Richard is triumphant but Leonard, of course, has forgotten all about it.

Richard is sent out as a rep to sell copies of Virginia's novel, Orlando, to bookshops & experiences the life of a commercial traveller. However, when he's left in charge at the Press while the Woolfs are on holidays, his days as a publisher are numbered when he gives instructions to the paper supplier that leave Leonard in a towering rage. He gets the sack & decides to become a journalist instead.

My lovely Slightly Foxed edition of A Boy at the Hogarth Press also includes A Parcel of Time, Kennedy's memoir of his childhood. Born in 1910, Kennedy's father was killed in WWI. His mother, an Anglo-Indian girl, never gets over this grief. She misses India, has had very little education, & feels at a disadvantage with her mother-in-law, Richard's formidable grandmother. She also feels burdened by Richard & her mental fragility is often at risk of breaking down completely. Richard's Nurse is his refuge, his only source of comfort & stability.

I found this a very sad book. Richard's mother, Norah, is adrift, afraid that her mother-in-law wants to take Richard away from her but resenting the tie he represents. If only the two women could have been friends, they would all have been much happier. But, Norah is ashamed of her lack of education & Grandmother is snobbish about Norah's family & Anglo-Indian heritage. The highlight of Richard's childhood is his discovery of drawing & his complete absorption in this new skill. His grandfather had been an artist but a highly respectable Victorian painter, a member of the Royal Academy, no Pre-Raphaelite loucheness there. Once Richard discovers his talent, he knows where his future lies. He considers his education a mere detour on the way to his true calling.
Posted by lyn at 1:09 AM