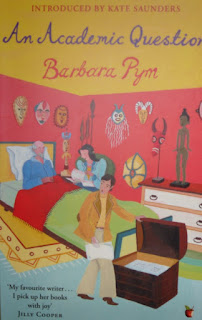 Quartet in Autumn was the last Barbara Pym novel I had left to read. I bought a copy over eight years ago when it was reprinted by Pan but I put off reading it. Partly because the subject matter seemed quite grim but mostly because it was the last Pym novel & when I'd read it, there would be no more. Barbara Pym Reading Week seemed like the perfect time to read it at last. Unfortunately I did find it depressing & grim so after 40pp I've put it back on the shelf. Instead, I've reread An Academic Question.

This is another of the novels that Pym wrote during the wilderness years when she couldn't get published. She never expected anyone except a few friends to read it & the manuscript was prepared for publication by Pym's literary executor, Hazel Holt. Although it was written in the early 1970s, it wasn't published until 1986. Pym wrote to Philip Larkin about this book,

I have nearly finished the first draft of another novel about a provincial university told by the youngish wife of a lecturer. It was supposed to be a sort of Margaret Drabble effort but of course it hasn't turned out like that at all. 22 June 1971

Caro Grimstone is married to Alan, the lecturer at a provincial university. She reminded me of Wilmet Forsyth in A Glass of Blessings. Like Wilmet, Caro is bored with her life. She doesn't work, has a four year old daughter & a Swedish au pair to look after the child. She's jealous of one of Alan's colleagues, Iris Horniblow & wonders if they're having an affair. Instead of Rodney heading off to the Ministry every morning, Alan lectures in anthropology & is working on an article for a learned journal. Unlike Wilmet, Caro isn't a churchgoer & spends her time visiting Kitty, an older woman who once lived on a Caribbean island with her husband & Kitty's son, Coco. Coco is one of those sexually ambivalent men that so often appear in Pym's books. On the strength of his experiences living in the Caribbean, Coco has been offered a lectureship at the university to pursue research into West Indian immigrants on Britain. Kitty's sister, Dolly, runs a bookshop but the passion of her life is hedgehogs & she spends most of her time looking after the hedgehogs who live in her garden.

Caro volunteers to read to the residents of a nursing home, run by Sister Dew from An Unsuitable Attachment. She reads anthropological journals to Mr Stillingfleet, an old man, now blind, who was once a missionary in Africa. Alan & his boss, Crispin Maynard, are both keen to get hold of Stillingfleet's papers which they believe are vital to their research. Their academic rivalry leads to Alan stealing the papers from Mr Stillingfleet's room while Caro reads to him. When Alan's article is accepted for publication, Maynard suspects that Alan has got hold of Stillngfleet's papers where he had failed & tries to stop publication. Caro, meanwhile, is pressured by Alan to return the papers which proves difficult when Mr Stillingfleet dies & his papers are given to the University Library run by Evan Cranton. Caro is a little afraid of his sarcasm but she applies for a part-time job at the library & waits for an opportunity to return the papers.

An Academic Question is an odd book in some ways. Written in the first person like A Glass of Blessings, Caro never engages my sympathy as Wilmet does. It's the 1970s & Caro has less excuse than Wilmet did in the 1950s to be idle. Her voice is disillusioned & vaguely envious of everyone from Iris Horniblow to her sister, Susan, living in London & living with a designer.

I saw Alan as an adequate husband, an unenthusiastic lover, a dutiful father and a son who despised the family he had grown beyond. But he was said to be brilliant at his work and a great help to his students. Also, and even more important, I had once been in love with him and in a way I still was. But waiting here, without drink inside me, conscious of people around me who appeared not to be conscious of me, I tried to step outside myself. Carefully, cautiously, with a cool eye and as much detachment as I could muster, I peeped at myself and Alan, as it were lifting the corner of a curtain or peering through a chink in a lighted window. I saw two people, together yet apart, not exactly incompatible, and I wondered if it was my fault.

It's as if Pym was trying to update her style & it's not altogether a success. I wonder if she would have wanted it to be published at all. Her comments about it in her letters are pretty unenthusiastic and, of course, she put the novel away unfinished & never had the chance to revise it. She doesn't seem comfortable in the world of the 1970s university or in the world of a young mother. Caro's relationship with her daughter, Kate, seemed perfunctory & her constant smoking like an attempt at trendiness - although maybe I just think that now when we look at smoking as practically a crime. Pym seems adrift without the community of the Church or the village & there's very little of the characteristic Pymian humour. Pym's final novel, A Few Green Leaves, is much more successful. In this novel, she returns to the village setting but she seems much more comfortable with her characters & she's brought her characteristic world up to date to great effect.

I did enjoy reading An Academic Question again after many years although it's not one of her best novels. I don't think I'd reread it since it was published in the 80s. As well as rereading my favourite Pyms this year (which I've already done), I also want to reread the novels I've only read once or twice. So, I have A Few Green Leaves, No Fond Return of Love & Crampton Hodnet to look forward to .
Posted by lyn at 3:18 AM