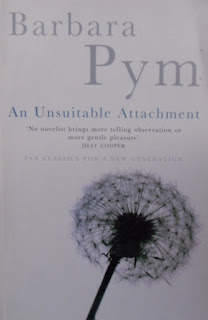 The rejection of An Unsuitable Attachment was a turning point in Barbara Pym's career. At the time, it must have seemed as though it marked the end of her career. The book was finished in 1963 & her publishers didn't want it. No other publisher wanted it either. Barbara Pym's letters to her friend, poet Philip Larkin, are bravely resigned but her disappointment is obvious.

Of course it may be that this book is much worse than my others, though they didn't say so, giving their reason for rejecting it as their fear that with the present cost of book production etc etc they doubted whether they could sell enough copies to make a profit. 12 May 1963

An Unsuitable Attachment wasn't published until 1982. Famously, Barbara Pym was "rediscovered" in 1977 when the Times Literary Supplement ran an article about the most over- & under-rated authors of the century. Only one writer was mentioned twice as being under-rated (by Philip Larkin & Lord David Cecil) & that was Barbara Pym. Suddenly her books were publishable again. Quartet in Autumn was published & shortlisted for the Booker Prize. An Unsuitable Attachment & The Sweet Dove Died (another rejected manuscript from the 1960s) followed were also published for the first time along with her final novel, A Few Green Leaves, published after her death in 1980.

In a way I can see why the publishers rejected this novel. It was certainly out of step with the early 1960s, the era of the Angry Young Men of literature & the theatre. It's slightly old-fashioned & slightly self-indulgent in the way that characters from the earlier novels pop up or are dragged in. The appearance of Everard Bone (Mildred is at home with a cold) at a dinner party & Harriet Bede in Rome accompanied by a pale young curate, don't add to the narrative & the mention of the death of Wilf Bason's mother would be meaningless to anyone who hadn't read A Glass of Blessings. When Rocky Napier from Excellent Women is mentioned in A Glass of Blessings, it evokes a real feeling of nostalgia for the War in Wilmet & Rowena & we feel we know & like them better because they were two of the many young Wrens who fell in love with glamorous Rocky in Naples. However, I loved all the references & it's been so many years since I first read An Unsuitable Attachment that it was as enjoyable as discovering a new Pym.

Mark Ainger is the Vicar of St Basil's, a distinctly unfashionable parish in North London. His wife, Sophia is described as a faded Pre-Raphaelite beauty & her main interest in life seems to be their cat, Faustina. Sophia's sister, Penelope, is a fashionable but discontented young woman who is getting to the age where she feels she should marry. Their congregation is typically Pymian with blunt, hearty Sister Dew & the Pettigrews (Edwin, a vet, & his sister, Daisy who's obsessed with cats & runs a cattery) typical of the parishioners.

Ianthe Broome moves into a house in the parish after the death of her mother. Ianthe trained as a librarian after her father died & works in a library specialising in politics & sociology. Ianthe is in her early 30s, always beautifully & suitably dressed, reads Elizabeth Bowen, attends church & delights in having her own house & garden after years living in a tiny flat with her mother near Westminster Cathedral.

Ianthe works with Mervyn Cantrell, the head librarian. Mervyn is prickly, pedantic & always delights in catching Ianthe out in a cataloguing mistake. He seems to be interested in Ianthe but does he really just covet her furniture, that "lovely Pembroke table" & her Hepplewhite dining chairs? When Miss Grimes retires, Mervyn appoints John Chellew to take her place. John is a very handsome young man but is he really suitable to work in the library? Ianthe is attracted to him but he's younger than she is & she's unsure how he feels about her.

Anthropologist Rupert Stonebird lives opposite Ianthe. He's come back to the Church in middle age as anthropologists sometimes do. He's also a bachelor & Sophia can't decide whether he should marry Ianthe or her sister, Penelope. On a parish trip to Rome, Ianthe meets an old acquaintance, Father Basil Branche, a handsome but delicate priest escorting two elderly ladies around Italy. The unsuitable attachments multiply & Sophia's matchmaking has very little effect as Rupert, Penelope, Ianthe & John diffidently circle each other in a mass of misunderstandings.

An Unsuitable Attachment is definitely early period Pym. The parish setting, the delicate gradations of class between the characters & the humour. It's a very funny novel. I loved the observations on working in the library, the comments about celibacy among librarians & Daisy's finicky ministrations to the cats she looks after. Mark is another of Pym's many ineffectual clergymen, giving sermons that are over the head of his congregation & offering to buy dinner & then dithering between rock salmon & plaice & deciding on plaice with an extra piece for Faustina. In tone, the novel is closest to Excellent Women although we never get to know Ianthe as well as we do Mildred with her ironic first person narration. I loved An Unsuitable Attachment & I'm looking forward to rereading more Pym before this centenary year is over.

There's a copy of An Unsuitable Attachment, and many other books by Barbara Pym, available at Anglophile Books.
Posted by lyn at 1:26 AM