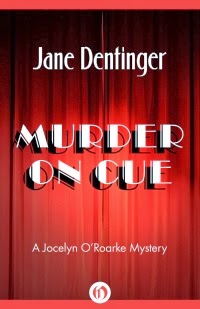 Murder on Cue is the first in a series of mysteries set in the world of New York theatre in the 1970s & 80s. Originally written in 1992, Murder on Cue & its sequels have just been released as ebooks by Open Road Integrated Media. This first book in the series is fast-paced, funny & full of theatrical gossip & intrigue. Jane Dentinger is definitely writing in the tradition of Agatha Christie & maybe especially Ngaio Marsh who set several of her books in the world of the theatre.

Jocelyn (Josh) O'Roarke is a struggling actress who has just been offered a part in a new play by her friend, Austin Frost. As well as a small role in the play, Term of Trial, she's also understudying the lead, a lawyer played by Harriet Weldon. Josh soon realises that no-one is happy about Harriet's involvement in the play but her husband, Harold Tewes, is bankrolling the production. The director, Charlie Martin, has had a big success with a musical but his next project got poor reviews & he needs a success this time. Harriet is not a good actress & is all wrong for the role of Lindsay Harding but the cast & crew have to make the best of it. Set designer John Baron is in a relationship with Harriet's son, Paul, a spoilt young man who is always in need of money& she does not approve. Harold Tewes' personal assistant, Sybil Stearns, is very devoted to him & doesn't seem all that fond of her employer's wife. Leading man, Kevin Kern, was once a pupil of Harriet's & their brief affair left some awkwardness in its wake. When Kevin pursues Josh, Harriet is not pleased. When Harriet is murdered, there is no shortage of suspects - including Josh, who will step into the biggest role of her career & had just been accused of wanting the lead role by Harriet in front of the whole cast & crew.

The police, led by Detective Sergeant Phillip Gerrard, soon discover that Harriet's death from a fall from a ladder, which was planned to look like an accident, was actually murder. Harriet insisted on pale pink light globes in her dressing rooms & always changed them over herself. While she was on the ladder, she was hit from behind with a sandbag. She bled to death, helped by the fact that she was taking medication for blood clots. There are no shortage of suspects & hardly anyone has an alibi. Josh soon realises that she is the chief suspect & decides that she has to do some investigating herself or she'll soon find herself in the dock. Fortunately, Gerrard finds himself attracted to Josh & so is unlikely to jump to any conclusions just because she seems to be the obvious suspect. In fact, several of the cast & crew have secrets that will be uncovered before the real murderer is revealed.

I enjoyed Murder on Cue very much. It's very much in the tradition of a classic mystery with a closed circle of suspects. It also had the added attraction of being set in the New York theatre world which I found fascinating. It made me think of Helene Hanff's Underfoot in Show Business. The 1970s setting isn't overdone & Josh is a very attractive heroine, likeable & not afraid to jump in where angels fear to tread. She is also impulsive, arranging to meet the person who hit her over the head as she was discovering a vital clue but at least she chose a public place for the meeting rather than backstage at midnight! I like to think of that plot twist as homage to the Had I But Known school of thriller writing. I would definitely like to read more of this series.

I read Murder on Cue courtesy of NetGalley.
Posted by lyn at 11:29 AM