Crime on my Hands - George Sanders 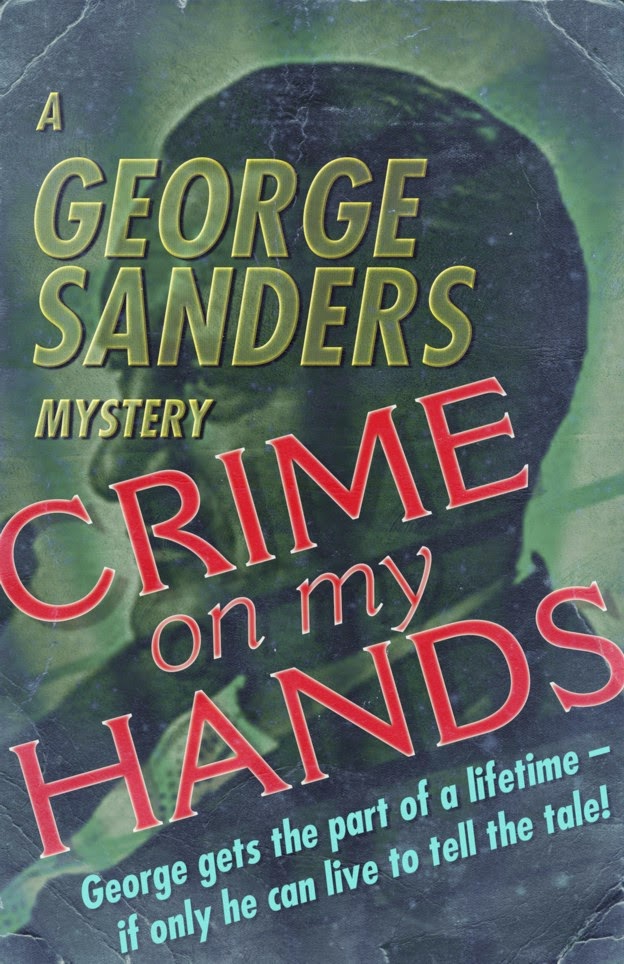 One of my favourite scenes in Alfred Hitchcock's Rebecca is during the inquest. The wreck of a boat has been found, a boat that contains the body of a woman, Rebecca De Winter. An inquest is called & Rebecca's widower, Maxim, is being asked some very difficult questions about the night his wife disappeared. During the luncheon adjournment, Maxim & his new wife are sitting in their Rolls Royce not eating the lunch sent from Manderley by their staff. Rebecca's louche cousin, Jack Favell, played by George Sanders, slides into the car, eats a chicken leg & tosses it out of the window, all the while making sly insinuations about Rebecca's death & threatening blackmail in the most suave way (you can see this scene here).

George Sanders made a living playing suave, smooth cads in Hollywood movies from the 30s to the 50s, including his Oscar-winning role as critic Addison De Witt in All About Eve. He also wrote, or co-wrote, two mysteries, Crime on my Hands, & Stranger at Home, as well as an autobiography, Memoirs of a Professional Cad. All three books have just been reprinted by Dean Street Press. I've just spent several very enjoyable hours reading Crime on my Hands. The story is narrated by George & I could hear his voice in every line. What a pity he's not still around to narrate the audio book.

As well as playing cads, George Sanders also made a successful series of mystery films playing a detective known as The Falcon. When the novel opens, George is making yet another Falcon movie & is starting to feel typecast. His agent, Melva, gets him a terrific part as the lead in a pioneer Western epic also starring screen goddess Carla Folsom. This could be the role that sends George's career in a whole new direction. The company are shooting a scene on location, when one of the extras is shot. It looks like a tragic accident, one of the prop guns must have been loaded with live ammunition rather than blanks. When it emerges that the man was shot with George's gun, a different calibre to the other weapons, which has since gone missing, it looks as though George is being framed for murder.

How different this was from my screenplays. As The Saint, or The Falcon, I had been confronted many times with situations more baffling than this, and always I had penetrated to the heart of the matter, seen a clue, reconstructed the situation and acted unerringly. But here was a nameless bearded corpse sprawled inside the circle of wagons on baking sand. There were no dropped collar buttons, no cartridges of an odd caliber, no telltale footprint with a worn heel, no glove lost in haste. ... A nameless corpse, and the only clue to the killer was my gun, planted by a nameless hopeful who thought he could match wits with me. Only, this time the lines weren't written for me. I had to make them up as I went along.

However, it seems that the extra, listed as Herman Smith, wasn't Herman Smith at all, but Severance Flynne, an unsuccessful small-time actor who changed places with Smith, but with what motive? All the extras wore beards, so had the bullet been intended for Smith or Flynne? George is drawn into the investigation & there seem to almost too many suspects - Riegleman, the director, anxious not to lose any time on a strict shooting schedule; Sammy, the prop man who should have made sure the weapons were safe; Paul, the casting director who was supposed to keep track of the extras. Then, there's Carla Folsom & Wanda Waite, both actresses with a lot riding on the picture for their future careers. Somebody in the cast & crew must have known Flynne but who was it & what could have been their motive to kill him?

Deputy Sheriff Lamar James is an intelligent, ambitious policeman who can run rings around his boss, Sheriff Callahan. He reluctantly allows George to do some investigating on his own & George is soon entangled in more complications than he imagined possible. The murder was caught on camera but when not only the murder weapon but also the vital reel of film go missing, George looks like the only viable suspect. He needs to not only clear his own name but find the murderer if he's going to avoid arrest - & the end of the best career break he's ever had. Then, when the vital scene is reshot & George deduces that the shot had to be fired from behind the camera, the circle of suspects narrows, more murders are committed & George finds his own life in danger.

Crime on my Hands is a fantastic mystery. The atmosphere of a film set in the 40s is fascinating & I loved the evocation of the whole Hollywood system. George's agent, Melva Lonigan & his press agent, Fred, are terrific. They're totally committed to George's career - & the cut they take of his earnings. Melva is smart & sassy, I imagined her played by Myrna Loy or Rosalind Russell. Vampy Wanda Waite could be played by Lana Turner & maybe a young Henry Fonda as Lamar James? I couldn't help casting the movie in my head as I read. The producer of the movie, Brewster Wallingford, must have been at least partly based on director Michael Curtiz. Curtiz' mangling of the language was notorious in Hollywood; David Niven used one of his most famous phrases, "Bring on the empty horses" as the title of one of his memoirs.

George Sanders is a witty narrator with a very dry, self-deprecating sense of humour. I found him infinitely more charming on the page than I ever have in the movies. For me, he'll always be Jack Favell or Miles Fairley, the sly cad in The Ghost and Mrs Muir. I really want to track down more of his movies now though. I'd like to see him playing a charming character rather than a cad. I don't know how much of the book Sanders actually wrote, it's co-written with Craig Rice, a popular crime writer who had written screenplays for Sanders' films. The dedication reads To Craig Rice, without whom this book would not be possible. George in the book certainly seems to owe quite a bit to Sanders' screen persona & aspects of his life such as his hobby as an inventor & his ability to cook are featured. I don't know that it really matters how much of the book is Sanders & how much is Rice. I enjoyed it very much & I think any fan of 1940s Hollywood or classic detective fiction would enjoy it too.

Dean Street Press kindly sent me review copies of all three George Sanders books that they're reprinting & I'm looking forward to reading the others. They also have plans to reprint other mystery authors, including Ianthe Jerrold, who was featured by Scott at Furrowed Middlebrow in his truly remarkable list of women mystery authors.
Posted by lyn at 2:05 AM