Effie Gray was married to two of the giants of the Victorian art world. When she was not quite 18, she married John Ruskin, the most famous art critic of the day. Their marriage was famously unconsummated & after six years of increasingly unhappy frustration, Effie had her marriage annulled. After a year or so, she married the Pre-Raphaelite artist, John Everett Millais. The story of Effie’s marriage & the way it ended was the greatest scandal of the 1850s & the consequences haunted all three of the participants until the end of their lives.

The story of Effie, Ruskin & Millais is a fascinating one. John Ruskin had known Effie & her family for some years. The Grays lived in the house where Ruskin’s grandfather had lived & where he committed suicide. Ruskin’s parents, especially his mother, were so horrified by this that they left Scotland, never to return. When Ruskin & Effie were married, they lived very closely with the elder Ruskins for much of the time. Ruskin was devoted to his parents & they considered him a genius. Effie was quite innocent & didn’t really understand what the physical relationship should be between a husband & wife. There are many theories as to why Ruskin didn’t or couldn’t consummate the marriage. He claimed that Effie had agreed initially not to have a physical relationship as they planned to travel & if she became pregnant it would interfere with their plans. Then, they decided that the marriage would be consummated when Effie was 25. Another theory was that Ruskin had never seen a naked woman, only classical statues & was revolted by Effie’s body. Ruskin also seemed more attracted to quite young women. He first knew Effie when she was just in her teens & his later relationship with Rose La Touche followed a similar pattern. As the girls grew older, his interest in them waned.

Effie felt this lack of interest in her personally as well as the physical rejection. Her relationship with her husband grew more distant as he would go out in the morning to work in his parents’ house close by, leaving her alone all day. She was forced to spend a lot of time with her mother-in-law who was not a sympathetic woman. Her attempts to discuss their relationship with Ruskin were rebuffed & her feelings of loneliness & dissatisfaction grew as the years passed. Effie’s parents were concerned about the amount of time Effie & Ruskin spent apart but she hadn’t told them the truth about her marriage.

The catalyst for change was Ruskin’s involvement with the Pre-Raphaelite Brotherhood. This was a group of young artists who burst on to the London art scene in the late 1840s. Their reverence for early artists like Raphael & their desire to strip away the conventions of the artistic establishment & paint in a purer, more natural way, at first found little favour at the Royal Academy. At the core of the group were Dante Gabriel Rossetti, William Holman Hunt & John Everett Millais. Millais was a boy genius, the youngest artist ever accepted at the Royal Academy schools. Although Ruskin was at first scathing about their work & the subjects they chose, he eventually came to recognise their talent & champion their work. 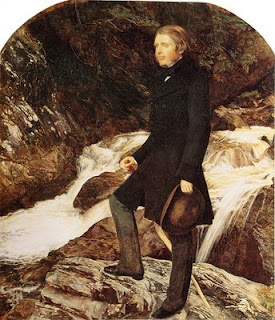 He invited Millais to accompany himself & Effie on a trip to Scotland so that Millais could paint his portrait. The trip to Glenfinlas resulted in a magnificent portrait of Ruskin staring down a Highland stream, water rushing past him as he contemplates his genius (image above from minutiarum.blogspot.com). Millais & Effie became friends & spent a lot of time together when Ruskin was working. When they returned to London, Millais asked if Effie would model for a figure in one of his greatest pictures, The Order of Release (seen below from the Wikimedia Commons website). Ruskin was happy to agree & it was during the sessions in Millais’s studio that they fell in love. Effie confided to Millais about the state of her marriage & he was torn between his love for Effie & his loyalty & gratitude to Ruskin. 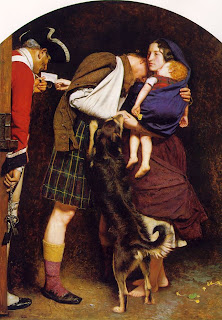 Effie’s 25th birthday passed & Ruskin now declared that he wouldn’t consummate the marriage because he feared Effie was mentally ill & shouldn’t have children. By this time, the last thing Effie wanted was for her marriage to be consummated. She told her parents the true state of affairs & her father, a lawyer, investigated her legal options. Divorce was almost impossible in the Victorian period & Effie’s reputation would be ruined by the scandal. The Church eventually granted her an annulment of her marriage on the grounds of non-consummation & in their judgment said that it was as if she had never been married at all. Ruskin wrote an extraordinary document outlining his side of the story but it was never used as he decided not to contest the action. It was only discovered & published more than 70 years later. He seems to have honestly believed that Effie’s wish to consummate the marriage was unreasonable & a symptom of her diseased mind.

The scandal among London’s artistic community was enormous. Ruskin was the butt of some very crude jokes among the younger men although his standing as a critic remained intact. Effie retreated to her family home, having no contact with Millais for over a year to avoid any more scandal. They were married in 1855 & enjoyed a long & happy marriage. This story is fascinating for the light it throws on Victorian attitudes towards marriage. Many people blamed Effie for the whole scandal. They thought she should have accepted whatever her husband decided & that she was deliberately trying to ruin his reputation. Her decision to have the marriage annulled was seen as deeply unfeminine & immodest. She had to undergo several physical examinations to prove her virginity to make her case.

Supporters of Ruskin, including his 20th century biographers, have seen Effie as a commonplace woman who made a great man into a laughing stock. There were rumours that Effie & Millais had started an affair on the trip to Scotland & had been deceiving Ruskin all the time. Ruskin’s parents turned against Effie completely & thought her mad or bad. The story refused to go away. Years later when Ruskin became involved with the La Touche family & fell in love with the young Rose, Mrs La Touche wrote to Effie to ask about the circumstances of her marriage to Ruskin. She was wary of Ruskin’s interest in her daughter, almost 30 years his junior, & concerned as to what his intentions were. This correspondence brought all the memories of her life with Ruskin back but Effie bravely wrote detailed responses to Mrs La Touche, telling her all she knew of Ruskin without bitterness or reproach. She knew how devastated she had been by the experience & wanted to prevent another young girl suffering in the same way.

Merryn Williams has written a fascinating book about this story. She has also come up with an intriguing theory that I hadn’t heard before. Williams believes that George Eliot was influenced by the story of Effie & Ruskin when she wrote her masterpiece, Middlemarch. It seems obvious now that it’s been suggested to me. The story of Dorothea married to the dry scholar, Casaubon, & falling in love with the young artist, Will Ladislaw, is very close to the story of the Ruskins & Millais. The conventions of fiction mean that Dorothea doesn’t have to endure the scandal of an annulment or a divorce to escape her marriage but there are parallels. I really enjoyed this book. I’ve read many books about the Pre-Raphaelites & I knew the story but it was fascinating to follow the events in such detail. There are lots of quotes from the letters & statements of all the protagonists. I especially enjoyed the insight into personal relationships & the expectations of society. I admired Effie’s courage in exposing herself to rumour & embarrassment in her quest to change her life & escape from an unhappy situation.
Posted by lyn at 5:56 PM