Scars upon my heart 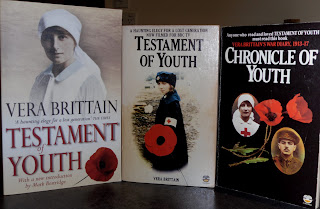 Vera Brittain is one of my favourite authors. I don’t know whether I would call her most famous book, Testament of Youth, comfort reading, but I’ve read it many times over the last 30 years & I’m always moved by it. Vera Brittain was one of the most famous feminists & pacifists of the 20th century. Growing up in “provincial young-ladyhood” in the spa town of Buxton, Vera longed for more than a constant round of tennis parties & visits with marriage to a businessman like her father at the end of it. She fought her parents to be allowed to go to Oxford like her brother Edward. She was successful but her time at Oxford was interrupted by the outbreak of WWI. Edward & his two best friends, Roland Leighton & Victor Richardson, joined up. Vera soon found herself frustrated by Oxford when she longed to do something to help the war effort. Her feelings were intensified by her growing love for Roland & she enlisted as a VAD, training in hospitals in London before serving overseas in Malta & France.

The War was the defining experience of Vera’s life. She lost everyone who really mattered to her. Roland was killed just before Christmas 1915. Vera was in Brighton with her parents, waiting for Roland to come on leave when she received the news that he was dead,

The next morning I had just finished dressing, and was putting the final touches to the pastel-blue crepe –de-Chine blouse, when the expected message came to say I was wanted on the telephone. Believing that I was at last to hear the voice for which I had waited for twenty-four hours, I dashed joyously into the corridor. But the message was not from Roland but from Clare (Roland’s sister); it was not to say that he had arrived home that morning, but to tell me that he had died of wounds at a Casualty Clearing Station on December 23rd.

When Vera was serving in Malta, she received word that Victor had been seriously wounded & she returned home to care for him. She planned to marry him in a spirit of self-sacrifice but fortunately, as she admits in Testament of Youth, she wasn’t called on to make that sacrifice, because Victor died soon after. Vera’s honesty is what makes Testament of Youth such a remarkable book. She is able to look back & realise that her feelings for Victor were a reaction to Roland’s death & a feeling that her life was over so she may as well help someone else as she would never be happy again. 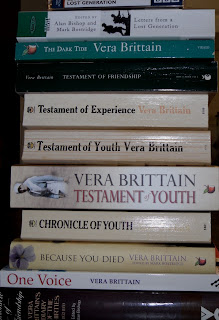 She rejoined the nursing service & served in France, hoping to be near Edward. However, he was sent to Italy where he was killed on the Asiago Plateau in 1918. Vera wrote this poem to commemorate Edward’s wounding at the Somme (for which he was awarded the Military Cross) & sent it to him, inscribed in an anthology of poetry. It’s doubtful that he ever saw the poem as he was killed soon after.

TO MY BROTHER
(In memory of July 1st, 1916)
Your battle-wounds are scars upon my heart,
Received when in that grand and tragic ‘show’
You played your part
Two years ago,

And silver in the summer morning sun
I see the symbol of your courage glow-
That Cross you won
Two years ago.

Though now again you watch the shrapnel fly,
And hear the guns that daily louder grow,
As in July
Two years ago,

May you endure to lead the Last Advance
And with your men pursue the flying foe
As once in France
Two years ago.

At the end of the War, feeling empty & hopeless, Vera went back to Oxford to finish her degree. She was older than the other undergraduates, had lived through four years of grief, misery & hard work, & felt that all her sacrifice had been for nothing. Her experiences were neither respected nor valued, in her eyes, & her mental state was precarious,

Although persistent dreams recurred of Roland and Edward -  the one missing and purposely hiding his identity because facially mutilated, the other suffering some odd psychological complex which made him turn against us all and keep silence – I endured none of those nightmare recapitulations of hospital sounds of which other wartime nurses complained... Only the horrible delusion... that my face was changing, persisted until it became a permanent, fixed obsession.

The delusion that she was growing a beard or turning into a witch persisted for some time. It was only the friendship of another student, Winifred Holtby, which saved Vera’s sanity & brought her some happiness. Their friendship is immortalised in Testament of Friendship, Vera’s biography of Winifred. Vera & Winifred moved to London after Oxford, determined to earn their living as writers. They both worked on novels & journalism & were active members of the League of Nations. Vera received a letter from George Catlin, a student at Oxford who admired her first novel, The Dark Tide. Their friendship grew through correspondence & they married in 1925. Roland wrote a beautiful poem to Vera while he was in France, foreseeing just such a situation if he should be killed.

The sunshine on the long white road
That ribboned down the hill,
The velvet clematis that clung
Around your window-sill,
Are waiting for you still.

Again the shadowed pool shall break
In dimples round your feet,
And when the thrush sings in your wood,
Unknowing you may meet
Another stranger, Sweet.

And if he is not quite so old
As the boy you used to know,
And less proud, too, and worthier,
You may not let him go –
(And daisies are truer than passion-flowers)
It will be better so.

Testament of Youth was an immediate success when it was published in 1933. The late 1920s & 1930s saw many war memoirs published. Enough time had passed & readers were interested in reading about the War again. Vera’s book is so moving because it is a such an honest account of a woman’s experience of war. Her losses are so terrible – if it was fiction, it would be unbelievable - & yet, she survived. Testament of Youth was reprinted by Virago in the 1970s when the feminist movement led to a resurgent interest in women’s history. 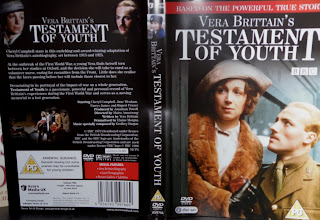 It was made into an excellent TV series with Cheryl Campbell, Rupert Frazer & Peter Woodward as Vera, Edward & Roland. Vera’s letters, diaries & journalism were reprinted. Her diaries of the 1930s & WWII are fascinating & give an insight into London literary life as well as the Home Front during WWII. Vera Brittain was a passionate pacifist & her stance led her into some controversy during WWII.  Letters from a Lost Generation is a collection of letters between Vera, Edward, Roland, Victor & Geoffrey Thurlow, another friend killed in action. A couple of years ago, Virago published Because You Died, a collection of Vera’s poetry & prose about the War, in a lovely hardback edition. 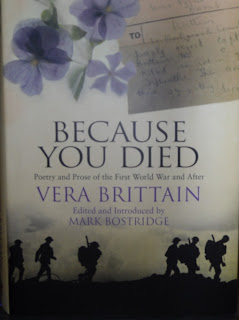 Reading Testament of Youth all those years ago has led me to all these books & more – about Vera Brittain, women’s experiences at war & afterwards, the war poets, other memoirs. I find the experiences of the young men & women who were caught up in WWI intensely moving & I marvel at their courage.
Posted by lyn at 7:40 AM