A Month in the Country - J L Carr 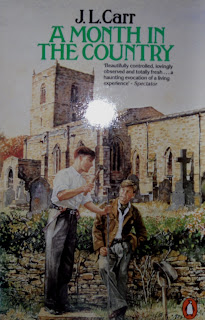 The marvellous thing was coming into this haven of calm water and, for a season, not having to worry my head with anything but uncovering their wall-painting for them. And, afterwards, perhaps I could make a new start, forget what the War and the rows with Vinny had done to me and begin where I’d left off. This is what I need, I thought – a new start and, afterwards, maybe I won’t be a casualty anymore.

A Month in the Country is a perfect gem of a novel. It’s the story of Tom Birkin, a young man, a shell-shocked survivor of WWI & the weeks he spends in a Yorkshire village that begin to heal him. Tom arrives in Oxgodby to reveal a medieval wall-painting in the church. Miss Hebron, a local landowner, had left money in her will to the church’s restoration fund but only on the proviso that they employ someone to uncover the painting. The vicar, Rev Keach, is not happy about the intrusion or the fact that he wasn’t consulted by Miss Hebron.  He’s an outsider, a Southerner in the North, a Churchman in a village of Chapel-goers. He’s unhappy about Tom’s work & unhappy that Tom wants to live in the bell-chamber. Tom is broke & can’t afford to stay anywhere else. He’s worked out his expenses very carefully, living frugally from one instalment of his pay to the next & he stubbornly insists on his right to stay in the church. 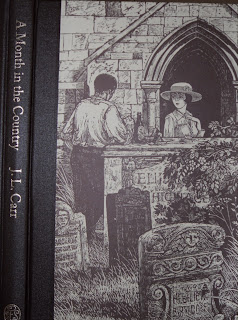 Tom begins to heal almost from the moment he arrives. Afflicted with a stammer & a facial twitch, deserted by his wife, Vinny, trying to make a living in the very specialized field of restoration work, he’s nevertheless excited by the possibilities of the job at hand. He quickly realises that the wall-painting, a representation of the Judgment Day, with Christ in majesty at the top & the saved & the damned on either side, is of exceptional quality. 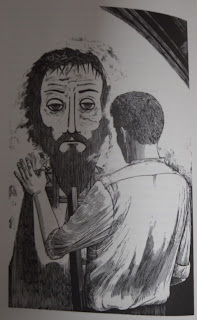 As he slowly removes the whitewash that has hidden the painting since the Reformation, he comes to know the master artist who painted it. He even finds the hairs from his beard where he’s leant into the paint while it was still tacky. Artists often put recognisable portraits of locals in these paintings & Tom is sure that one soul falling head first into the fires of Hell, is a portrait of someone the artist knew. This man, with a crescent on his forehead, is so life-like, but who was he?

Tom also meets the locals. Kathy Ellerbeck, daughter of the stationmaster, takes Tom in hand. She brings her father’s gramophone so he can listen to music while he works & food from her mother, who has soon discovered Tom’s poverty. Kathy & her family draw him into the life of the village. He has Sunday dinner with them, goes on the Sunday School treat, is taken along on a trip to Ripon to buy a new (secondhand) organ for the Chapel. On one memorable occasion, Tom is sent to deputize as preacher for Mr Ellerbeck at a nearby Chapel. He chooses the longest hymns he can think of but, in the end, tells the tiny congregation of his work on the painting, what it meant to the people who saw it in church every Sunday & how he is revealing its beauty again after so many centuries.

Miss Hebron had also left money for an archaeologist to locate the grave of her ancestor, Piers Hebron, who would have been the squire in the 14th century when the wall=painting was done. Charles Moon, another survivor of the War, is camping in the field next to the church, in a tent over a pit because he feels safest underground. He befriends Tom, recognizing a fellow sufferer. They drink a mug of tea every morning before they start work, although Moon never becomes part of the village as Tom does. More importantly for Tom he meets Alice, the beautiful wife of the Rev Keach. Alice comes to sit in the church & watch him work,


She would discreetly leave the door slightly ajar and the seat herself in the back pew and then shelter behind her wide-brimmed straw hat (a rose pushed into its band). But for the occasional creak in the scaffold whenever I shuffled back a pace to see what I’d been doing, the building was so still that, although I was a good thirty paces away and my back towards her, we talked casually as we might have talked in a parlour. Not a conventional conversation – no more than a remark, a question, answer, exclamation. Really, there was no need to look: from the way she put things I could see her face.


Tom speculates about the lovely Alice & the awkward, unprepossessing Rev Keach. He goes to the Vicarage to ask for his pay & wonders how they live together in the large house, surrounded by trees, but almost bare of furniture.

By the end of the summer, with the painting uncovered & the weather turning to autumn, the idyll must end. Tom’s love for Alice is acknowledged but remains unexpressed, Moon discovers Piers Hebron’s tomb, which contains a surprise, & Tom realises that he must move on. 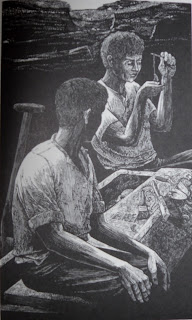 A letter from his wife, asking for a reconciliation, calls him back to his old life.  The healing that has begun in Oxgodby will continue as the memories of the War recede & the confidence Tom has gained set him up for the next stage of his life.

This is one of my favourite books. Although not strictly about WWI, the melancholy sadness of the War is everywhere. The experiences of Birkin & Moon, the photographs in living rooms of sons who didn’t return, the atmosphere of renewal in the rural landscape. It’s heightened by the story being told by Tom in old age, looking back at that golden summer when he began to live again. It’s nostalgic without sentimentality. There’s a lot of humour & irony in the story as well as the fascinating details of how the wall-painting would have been created. I have two copies of A Month in the Country – an old Penguin & a new, beautiful Folio Society edition with lovely illustrations by Ian Stephens, as you can see above. 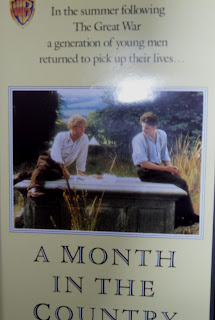 There’s also a movie that was made in the 80s with Colin Firth as Tom, Kenneth Branagh as Charles Moon, Natasha Richardson as Alice & Patrick Malahide as Rev Keach. I recommend this, it’s a beautiful recreation of the book. I like to read A Month in the Country in November, along with the poetry of Owen, Sassoon & Edward Thomas. Although the novel was published in 1980 (it was shortlisted for the Booker Prize), it evokes all the feelings of melancholy & the need for healing that so many must have felt after the War. Reading A Month in the Country is a moving experience.
Posted by lyn at 1:34 PM