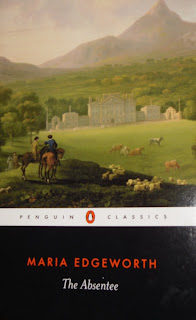 In 1814 Jane Austen jokingly wrote to her niece, Anna, "I have made up my mind to like no Novels really, but Miss Edgeworth's, Yours & my own." Maria Edgeworth was one of the best-selling novelists of the early 19th century & one of the first regional novelists. Her novels of Irish life influenced Sir Walter Scott, who decided to do for the Scots what Miss Edgeworth had done for the Irish. The Absentee is the story of an Anglo-Irish family. It's the story of the evils of absentee landlords but also a story of fashionable London life & a romance as well.

The novel begins with three women gossiping about another woman's party. The Duchess of Torcaster, Lady Langdale & Mrs Dareville are snobbish society women & they're deciding whether or not they will go to Lady Clonbrony's gala. Lady Clonbrony is the wife of an Irish Lord who wants desperately to be accepted into London society. While society is quite willing to accept her hospitality (if nothing better offers), they also look down on her pretensions. Lady Clonbrony is a foolish woman, trying to ape the manners & accent of high society while being fleeced by fancy tradesmen & scorned by the very women whose circle she wants to enter. Lord Clonbrony has been prevailed upon by his wife (who brought him a fortune & never lets him forget it) to leave his Irish estates in the hands of land agents & move to London. Lady Clonbrony's fortune is long gone & Lord Clonbrony is out of his depth in London, bored with society & deeply in debt. Their son, Lord Colambre, has just returned from university & is shocked by the state of his parents' affairs.

Colambre decides to go to Ireland to investigate his father's estates & see what can be done to remedy their financial situation. Colambre is a serious young man. He left Ireland as a child but is very aware of his family's responsibilities for their tenants. His mother tries to encourage a marriage with Miss Broadhurst, a rich heiress, but Colambre is in love with his beautiful, sensible, noble but penniless cousin, Grace Nugent. Grace was orphaned as a baby &, although her mother insisted that she was married to her father, no proof of the marriage could be found & her family cast her off. Colambre cannot allow himself to marry a woman whose mother was of questionable morals so he tries to ignore his feelings for Grace. Grace, meanwhile, has been brought up by Lady Clonbrony almost as a daughter & is much loved by her. However, it has always been made clear that a marriage between Grace & Colambre would be out of the question so Grace has honourably suppressed her feelings. Colambre's trip to Ireland becomes a quest to investigate Grace's origins as well as look over the family estates & discover where the money has gone.

Colambre visits the estates incognito & discovers the best & worst of the absentee system. His own inheritance, an estate called Colambre, is managed by Mr Burke, the perfect agent. Honest and diligent, Mr Burke is blessed by the tenants for the care he takes of  the estate. His wife runs a school where Catholic & Protestant children share the same benches & the local priest & vicar dine happily together at their table. The land is well-cultivated & every care is taken of Lord Clonbrony's property. Unfortunately, Lord Clonbrony, desperate for cash in London, is influenced by Sir Terence O'Fay, a sponging hanger-on, to sack Mr Burke & transfer both this estate & the Clonbrony estate to the tender offices of Nicholas Gerraghty, the model of a dishonest, wicked agent. Gerraghty cheats the tenants at Clonbrony, forces them to pay exorbitant rents, never improves their land & cuts down forests to make a quick profit.

'And is this my father's town of Clonbrony?' thought Lord Colambre. 'Is this Ireland? No, it is not Ireland. Let me not, like most of those who forsake their native country, traduce it. Let me not, even to my own mind, commit the injustice of taking a speck for the whole.What I have just seen is the picture only of that to which an Irish estate and Irish tenantry may be degraded in the absence of those whose duty and interest it is to reside in Ireland, to uphold justice by example and authority; but who, neglecting this duty, commit power to bad hands and bad hearts - abandon tenantry to oppression, and their property to ruin.'

As this shows, Lord Colambre is a humourless young man, but his heart's in the right place. Edgeworth has a definite didactic point to make about the evils of absentee landlords & there are few shades of grey in her portrayals of the evil & saintly agents or the poor oppressed tenants, living for the day when their lord (who they never blame for their troubles) returns to sort out the mess.

I especially enjoyed the scenes in London & Dublin society, full of vicious gossip & sparkling wit. Lady Dashfort is a woman living on her wits, forever scheming to find a rich husband for her daughter, Isabel. She decides to ensnare Colambre &, although armed against her wiles, even he is entertained by her at first.

'Ay, I knew how it would be,' said (Lady Dashfort) ... 'He began by detesting me, and did I not tell you that, if I thought it worth my while to make him like me, he must, sooner or later. I delight in seeing people begin with me as they do with olives, making all manner of horrid faces, and silly protestations that they will never touch an olive as long as they live; but, after a little time, these very folk grow so desperately fond of olives, that there is no dessert without them. Isabel, child, you are in the sweet line - but sweets cloy. You never heard of anybody living on marmalade, did ye?'

The Absentee is an entertaining novel with lots of humour & wit. Edgeworth knew Ireland & her Irish characters are far from the caricatures that had been standard in fiction & plays up to this time. Quite a few of her other novels are in print, I have Belinda & Helen on the tbr shelves, & I'm looking forward to reading more of her work.