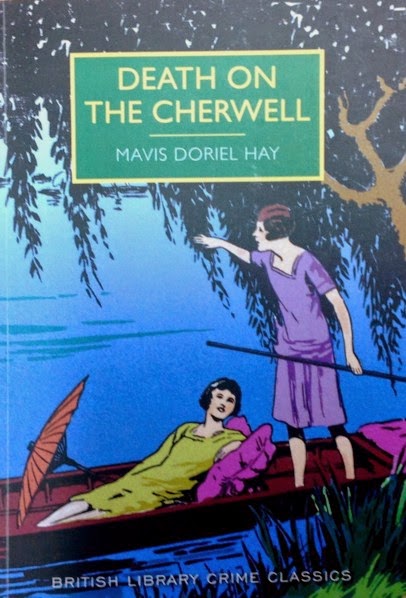 Published in 1935, the same year as Gaudy Night by Dorothy L Sayers, Death on the Cherwell, & its author, Mavis Doriel Hay, have been completely forgotten until this welcome reprint by the British Library. The tradition of college crime - whether based in Oxford or Cambridge - was well-established in the Golden Age of mystery fiction & I enjoy a mystery set in an enclosed community so I was definitely interested in this reprint. Add the gorgeous cover & the fact that the fictional college is called Persephone & I couldn't wait to read it.

Four first-year students at Persephone College - Daphne, Sally, Gwyneth & Nina - meet on the roof of the boathouse near the college on a cold January afternoon. They plan to form their own society, the Lode League, & their purpose is to curse the unpleasant Bursar of the College, Miss Denning. Miss Denning, known as the Burse, is coldly efficient & very strict with the students & is therefore loathed by many. The League has barely concluded their first meeting when they see a canoe drifting down river. They're astonished & a little frightened to discover the dripping wet body of Miss Denning lying in the bottom of the canoe.

The Principal of the College, Miss Cordell, calls the police & it appears that Miss Denning had quite a few enemies & not just among the disgruntled students. She was feuding with a misogynistic local landowner, Mr Lond & a local farmer, Lidgett, over the sale of land to the College. She had also upset a Yugoslav student, Draga Czernak, by insulting her & inspiring the girl to threaten a blood feud against her. She was also very secretive about her private life. She had no family, apart from a niece, Pamela, who was studying at Cambridge. Miss Denning had been determined to keep Pamela away from Oxford but would never explain why.

Miss Denning was a keen swimmer & canoeist & it wasn't unusual to find her on the river in all weathers. Inspector Wythe of the local police soon decides that her death was murder. How could she have drowned accidentally & then got herself, dripping wet, back into the canoe? If she hit her head accidentally, someone must have put her body back in the canoe & set it drifting downstream. Where were the paddles? When the doctor discovers a blow to the back of her head, it seems that murder or manslaughter are the only options. Scotland Yard, in the person of Detective Inspector Braydon, arrives to carry on the investigation, which is being helped & hindered by the meddling of the four members of the Lode League as well as some of the male students of  St Simeon's. Finding the solution of this mystery will mean delving into the past of Miss Denning & disregarding a lot of red herrings along the way.

I enjoyed Death on the Cherwell very much. The college atmosphere was evoked very successfully. I loved the fact that the students of Persephone College were just as irritated at being referred to in the Press as Undergraduettes as the students & Fellows of Sayers's Shrewsbury College. There are some very funny scenes, especially Daphne's conversation with Owen Vellaway, student of St Simeon's & newly published poet. His poem, Dust, is available in Blackwells, in a sealed package to stop people just reading it in the bookshop. What would Owen have thought about pirated books in the days of the ebook? The students are resourceful in their investigations & I do think Inspector Braydon is extraordinarily forbearing with them as they go around picking up evidence & destroying fingerprints. He's definitely in the gentleman sleuth mould of Alleyn & Campion, though, & has impeccable manners & a proper sense of the right way to go about a sensitive investigation so as not to impugn the reputation of the College.

Sally's sister, Betty & her husband, Basil Pongleton, (who made an appearance in Hay's other mystery, Murder Underground) arrive in a wonderful car & have a convenient previous acquaintance with Miss Denning & her niece. This enables them to offer to look after Pamela when she arrives in Oxford & Sally & her friends take advantage of the opportunity to further their investigations. The minor characters are all interesting, from Mr Lond's worried landlady to the absent-minded don, Mr Mort & the unhelpful Farmer Lidgett, who leads Inspector Wyeth on a muddy walk through his fields, recreating the afternoon that Miss Denning died. Death on the Cherwell is my idea of a perfect Sunday afternoon book. It's a shame that Hay only wrote three mysteries but it's lovely to have them now all back in print in this beautifully produced series of British Library Crime Classics.
Posted by lyn at 1:29 AM