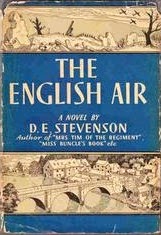 Sophie Braithwaite & her daughter Wynne are preparing to welcome their cousin, Franz von Heiden, to Fernacres. Sophie's cousin, Elsie, had married Otto von Heiden before the First World War & spent the rest of her life in Germany. Elsie was very unhappy & the marriage was not a success. Being an Englishwoman in Germany during the War was difficult & Otto wasn't the kind of man to support his wife against the gossip & unkindness directed at her. Now, in 1938, Elsie's son, Fritz, wants to visit.

Sophie is a kind, rather distracted woman, a widow with two children - Wynne & Roy, who is in the Navy. Her brother in law, Dane Worthington, also lives with the family. Dane seems to do very little to earn a living but he is actually involved in mysterious government work. Not quite spying but he seems to be used when delicate international negotiations are required. In that, although in no other way, he reminded me of Peter Wimsey. Dane even has a loyal manservant in the same efficient mould as Bunter. Wynne is a typical middle class young woman of her time. She's left school & is involved with her local community but spends a lot of time with her friends, playing tennis.

Franz's visit begins awkwardly as he adjusts to his English family & the English sense of humour. However, he's soon being called Frank & finds himself learning a great deal about the English & their way of life that surprises him. Frank's father is a committed Nazi & Frank has been brought up to believe in Hitler & his policies. Otto has sent his son to England ostensibly to improve his English but he's really there to gauge the English attitude to Germany. Dane soon realises what Frank is doing but admires the young man's serious attitude & is content to merely observe him. Frank realises that his English side, which he was always made to feel ashamed of, is more important to him than he imagined.

When Chamberlain returns from Germany declaring Peace In Our Time, Frank is relieved & delighted that his two countries have averted war. He is devastated when Hitler invades Czechoslovakia in 1939, in defiance of the Munich agreement. All his illusions about Hitler come crashing down with that one betrayal. He is even more upset because he has fallen in love with Wynne & realises that he cannot ask her to live in Germany & repeat the tragedy of his parents' marriage. Frank & Roy are on a driving tour of Scotland when war is declared & he immediately leaves for Germany.

Frank (now Franz again) finds his Aunt Anna, his father's sister who had looked after him as a child, ill & distressed, while his father is about to take up an important post in the Nazi Party. Franz decides to join a resistance group working to overthrow Hitler's regime & he's soon broadcasting to the allied countries, including England, where Dane hears him one evening. The Braithwaites have no idea where Franz is as he left without word. Wynne is in love with Franz even though they never discussed their feelings or their future. All she can do is wait for word, unaware that Franz is risking his life opposing the Nazis.

I loved The English Air (cover picture from here). Published in 1940, it gives a real sense of the atmosphere of the late 30s, the apprehension of another war & the relief that many people felt after Munich. Franz was such a sympathetic character & the story is almost entirely told through his experiences. It was interesting to see such an even handed presentation of a German character in a book written at such a fraught time. It's lovely to see Stevenson showing us the English from an outsider's perspective. Of course, it wouldn't be a Stevenson novel without a trip to Scotland &, as always, her descriptions of place & nature are beautifully done. Wynne & her friends are fairly stock characters but Sophie was a delight & her relationship with Franz was delicately drawn. The scenes between Franz & his aunt were very poignant & the later scenes in Germany very tense. This is one of the best D E Stevensons I've read. It's available to borrow as an ebook from Open Library & there are other recent reviews from The Captive Reader & Fleur In Her World (from whose blog I discovered Open Library).

Edited to add : The English Air has just been reprinted by Greyladies & 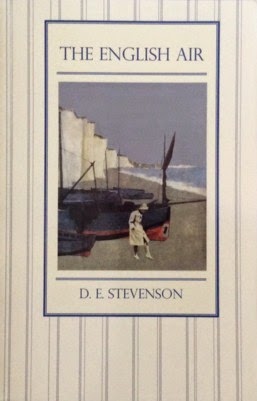 this edition is available for US readers from Anglophile Books.