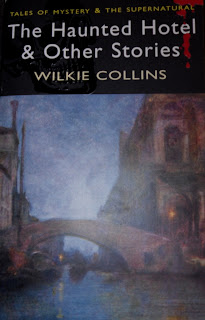 I can’t stop reading Wilkie Collins! I read three novellas a couple of weeks ago & went straight on to another selection of his short stories. This collection is published by Wordsworth Editions, a terrific company specialising in the classics at incredibly reasonable prices. I’m especially fond of their series of horror & ghost stories, Tales of Mystery & the Supernatural. I love a good ghost story & Wordsworth have reprinted many once popular authors like May Sinclair, Amelia Edwards, D K Broster & Louisa Baldwin in this series as well as better known authors like Elizabeth Gaskell, Edith Wharton, Arthur Conan Doyle & Wilkie Collins.

This volume contains The Haunted Hotel which I’ve already read, as well as a range of ghost stories from different periods of his career. Blow up with the brig! was one of his earliest published stories. It‘s a suspenseful tale that has a scene where a young man waits as a candle burns down to set off an explosion that will kill him & destroy the ship he’s trapped on, that would not be out of place in a modern thriller. The Dream Woman is a story that reminded me of Thomas Hardy’s tales of fate & destiny. A man has a dream of a woman attacking him with a knife. He describes the dream to his mother who superstitiously writes it down in minute detail. Later, he meets a woman very much like the woman of his dream but he ignores his mother’s warnings & marries her with terrible results.

The Dead Hand is a truly creepy story of a young man who spends a night in an inn with a dead man. It’s race day & he’s left it too late to get a bed. He arrives at a dingy tavern & the landlord offers him a very quiet room mate indeed. Collins describes the growing unease of the young man as his candle slowly burns down & he realises that he will soon be in the dark with the corpse. Just as darkness is about to descend, he sees the hand of the man slowly move to the edge of the bed & fall over the side.

The Devil’s Spectacles is a story of a mysterious pair of spectacles that give the wearer the ability to see the true thoughts of anyone he looks at. This story is about a young man, Alfred, who is torn between two women & when he is given the spectacles by a dying man, he can’t resist trying them out on the women in his life. The previous owner of the spectacles was a villainous old man, Septimus Notman, disliked by everyone, who tells Alfred a horrible story of cannibalism & an encounter with the Devil as he lays dying. He gives the spectacles to Alfred who accepts them reluctantly but can’t resist the temptation to try them out. I like the humorous touches in this story although some parts of it are shocking. Alfred cleans the glasses thoroughly before putting them on as the old man had been dirty & he’s a fastidious young man. Alfred hears some truly catty comments while wearing the spectacles, not only from the two girls he’s involved with but also from his mother who is trying to encourage him to marry her niece. The Devil, when he appears to Septimus in the icy wastes of the Arctic, is quite a humorous fellow,

A human being who elevates himself, and rises higher and higher to his immortal destiny, is a creature I hate. He gets above me, even in his earthly lifetime. But you have dropped – you dear good fellow – to the level of a famished wolf. You have gobbled up your dead companion; and if you ever had such a thing as a soul – ha, Septimus! – it parted company with you at the first morsel you tasted of the Boatswain’s mate. Do you think I’ll leave such a prime specimen of the Animal Man as you are, deserted at the North Pole?

Wilkie Collins certainly knew how to tell a good story. I’ve borrowed another collection of his stories from work & I’ve been dipping into the Cambridge Companion to Wilkie Collins as well. I’m also tempted to get hold of his novel, Hide & Seek, after reading this review of it over at Desperate Reader. His fascination with the weird & the mysterious is certainly a fascination I share, especially when the stories are set in the Victorian period & are as good as the stories in this collection. 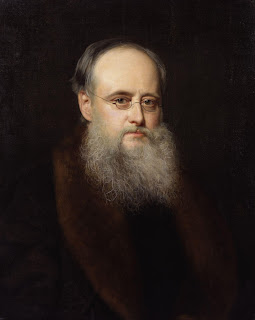 I love this portrait of Wilkie Collins by Rudolph Lehmann. I think it shows the humour & good nature that i think were among his best qualities. I'm certainly glad he wrote so much & there's still much to discover.
Posted by lyn at 9:53 AM