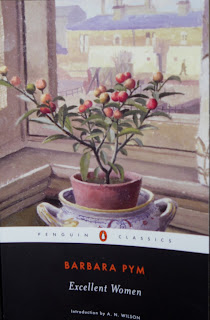 Mildred Lathbury is my heroine. Sensible, ironic, independent, with a self-deprecating sense of humour,

Let me hasten to add that I am not at all like Jane Eyre, who must have given hope to so many plain women who tell their stories in the first person, nor have I ever thought of myself as being like her.

Mildred lives in a block of flats in “this shabby part of London, so very much the ‘wrong’ side of Victoria Station, so definitely not Belgravia,” & works part time for a charitable society helping distressed gentlewomen. It’s the late 1940s, that dreary period of post-war inertia & restraint. Mildred is about to meet her new neighbours, Helena & Rocky Napier. Rocky has just been demobbed from the Navy where he was “the most glamorous Flags in the Med”. He spent the war mixing cocktails & organising the social engagements in the Admiral’s villa in Naples.  Helena is an anthropologist, just back from working in the field in Africa with the enigmatic Everard Bone. The Napier’s marriage was a product of the war & it may not survive the peace. Mildred’s calm routine of work & church activities is about to be turned upside down. Mildred is the daughter of a country clergyman & his wife, now both dead, & her best friends are the vicar of her London Parish, Julian Malory & his sister, Winifred. Julian is an absent-minded, ascetic man in his forties. Winifred is older, badly dressed in the rejects from church jumble sales, kind, enthusiastic but rather innocent & ineffectual. When the Malorys decide to convert their attic into a flat & take in a lodger, Mildred imagines a nurse or social worker or an Anglo-Catholic widow. Imagine her surprise when Allegra Gray, a clergyman’s widow but a very glamorous one, arrives on the scene. It’s not long before Mrs Gray has beguiled Julian into giving her his hearthrug & is remaking Winifred’s wardrobe. But it’s when Mildred & her friend, Dora Caldicote, catch sight of Julian & the widow holding hands in the park that the upsets really begin. 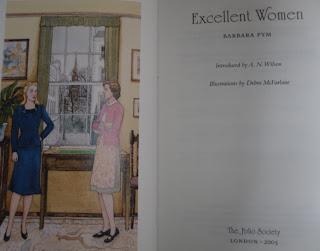 Excellent Women is my favourite Barbara Pym novel. I’ve read it many times, I even have three copies of it, including this lovely Folio Society edition. That's Helena & Mildred on the title page. It’s full of acute observations & so many ironic & funny lines. Mildred finds herself taken out of her comfort zone by her friendship with the Napiers.  As well as experiencing the horror of meeting by the dustbins in the basement & having to share a bathroom, she goes to a meeting at the Learned Society to hear Helena & Everard Bone give a paper. She & Rocky observe the anthropologists, looking at the books on the shelves with titles like Five Years with the Congo Cannibals & With Camera & Pen in Northern Nigeria. Of course, being an excellent woman, “holy fowl” as Helena describes Mildred & her fellow churchgoers, Mildred also finds herself taken advantage of by the Napiers, becoming the go-between in their arguments & left to supervise the removalists when Helena goes home to her mother.

Through her friendship with the Napiers, Mildred meets Everard Bone, an Anglican convert whose mother is obsessed with birds (she collects newspaper clippings proving that birds are planning to take over the world. I wonder what she would think of Daphne Du Maurier’s story!?) & woodworm. One of my favourite scenes is when Everard meets Mildred as she leaves work one afternoon in the middle of summer,

I was thinking of hurrying past him as I was not very well dressed that day – I had had a ‘lapse’ and was hatless and stockingless in an old cotton dress and a cardigan. Mrs Bonner would have been horrified at the idea of meeting a man in such an outfit. One should always start the day suitably dressed for anything, she had often told me... Although I agreed with her in theory I found it difficult to remember this every morning when I dressed, especially in the summer.

As well as her sloppy clothes, Mildred is also carrying a string bag containing a loaf of bread & a biography of Cardinal Newman. Such a Pymmish detail. Mildred has an annual lunch with Dora Caldicote’s brother, William, who is a civil servant in the City. He takes her back to his office & she meets his colleagues, obsessed with being first to the tea trolley & spending their time looking longingly across at the opposite building that they call the Ministry of Desire. William also shows a more whimsical side of his rather stuffy personality by confessing to feeding the pigeons every day.

...I had not known about William’s fondness for pigeons and there was something unexpected and endearing about it. He seemed so completely absorbed in them, calling them by names, encouraging this one to come forward and telling that one not to be greedy, that I decided he’d forgotten all about me and it was time to go home.

William is upset to be moved to a new office where “Different pigeons come to the window.” It’s this kind of observation that I find so funny. When Mildred can’t sleep, she reaches for one of the books she keeps just for that purpose on her bedside table. Although she thinks Religio Medici would be appropriate she’s quite relieved when she picks up Chinese Cookery instead & drifts off to sleep. On Bank Holiday Mondays, Mildred cleans out the pigeonholes of her desk but, as she always becomes distracted by looking at old shopping lists, she rarely finishes the job. This book has become so much a part of the background of my thoughts that I always add extra cheese when I’m making macaroni cheese after Mildred’s experience of dining with the Malorys,

Not enough salt, or perhaps no salt, I thought, as I ate the macaroni. And not really enough cheese.

And when I clean the bath, I think of Mildred scrubbing away, thinking to herself how difficult it was to properly clean a bath & how she sometimes felt herself to have been found unworthy to have a bathroom of her own as she’s always had to share. 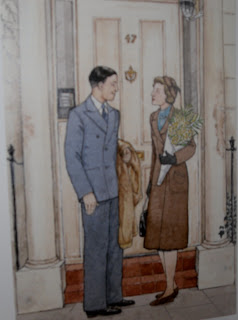 Excellent Women is one of my favourite comfort reads. It always makes me laugh. I love the middlebrow Englishness of Mildred’s life with her distressed gentlewomen, church jumble sales & Lent sermons. I love her awareness of the ridiculousness of everyday life. As I said at the beginning of this post, Mildred Lathbury is my heroine.

There's a copy of Excellent Women (the Folio Society edition, as it happens), and many other books by Barbara Pym, available at Anglophile Books.
Posted by lyn at 7:47 AM