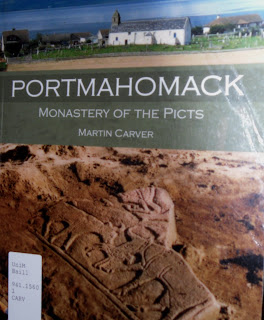 Dark Age Scotland is even more impenetrable than the rest of Dark Age Britain.  So, the discovery of a Pictish monastery at Portmahomack on the north-east coast of Scotland was a very big deal indeed. I’ve been reading Martin Carver’s fascinating, accessible account of the dig. I knew of Martin Carver as the archaeologist who worked on the Sutton Hoo ship burial. I’d read his book about Sutton Hoo & knew that his writing is scholarly but also understandable by the general reader.

This book on Portmahomack is an account of the dig & its results. It’s an interim account; the full scholarly write-up with all the scientific results won’t be published for at least a decade. The book is divided into three sections. The first chapters describe how the expedition was designed. I found this fascinating. Archaeologists can’t just come across a likely field & start digging trenches. Portmahomack was identified as the likely site of a monastery and church by the many stone monuments that had been discovered there. There has also been a church at Portmahomack for centuries but no one knew how many churches had been on the site. The expedition was based around these questions.

However, there were many stakeholders who had to be consulted & every one of the groups involved seemed to have different expectations of what the dig would produce & what the outcomes should be. An incredible amount of work had to be done before the first trench was dug. All the historical accounts of the area were collated along with records of archaeological finds over the centuries. Preliminary work was done using non-invasive methods of exploration to determine the extent of the site. Local sensitivities & concerns had to be addressed as part of the site was a churchyard & people were not happy at the prospect of their family’s graves being disturbed. All this was done & a detailed plan was drawn up. Funding had to be obtained for the work to be done at all. A local historical society, the Tarbat Historic Trust, were involved in fundraising & also applying for funding from other bodies. The University of York took on the dig as a research project. Work finally began in 1996.

The story of Portmahomack began in the mid 6th century when a small monastery was built. The real flowering of the site took place about 100 years later when the monastery was greatly expanded & activities such as producing vellum for creating manuscripts & metal working took place. Then, a catastrophic raid took place in the late 8th- early 9th century that destroyed the monastery. In the following 200 years, some of the industrial processes like metal working continued but there was no monastery. The workers had new masters, maybe Norse or Moray raiders & their families. By the 12th century, farming had taken over from industry & a new parish church was built. The long history of Portmahomack as a parish began with several buildings being constructed & expanded on the same site right up to the present day.

The most interesting part of the book for me was the way that the archaeologists could take fragments of carved stone & speculate about the monument or stone cross it was once a part of. The stone monuments were very beautiful, with the Pictish elements of the decoration including strange animals & beautiful decorative scrolls & borders.  The different types of graves, from cist burials (the corpse is surrounded by stone slabs) to burials with stone slabs just around the head of the deceased, to burials without stone at all. The different types of burial & where the graves are located denotes the status of the person. The grave markers that were reused in rebuilding the church over the centuries. The interpretation of these clues can be argued over among the experts for years. The age & sex of the burials at different periods gives clues to the site. For instance, the predominance of middle-aged male burials dated to the 7th & 8th centuries point to the fact that this was a monastery. Later groups of burials with men, women & children point to a farming community.

Martin Carver ends his book with a look at the history of St Colman’s church (as it became in the 12th century) from the medieval period to the present. The archaeologists may have completed the dig but many questions remain about Portmahomack & its history. What kind of Christian rule did the monastery follow? Was the monastery founded by St Columba of Iona? Why is there so little evidence of trade with Europe when the site is on the North Sea? A dig like this can throw up as many questions as it answers. Here’s a link to the website of the Tarbat Discovery Program at the University of York where you can see more images from the dig.
Posted by lyn at 1:54 PM