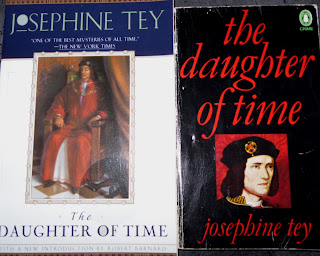 It’s not often that you can pinpoint the beginning of an obsession. My obsession with Richard III began in around 1978 in the library at Lalor North High School in the northern suburbs of Melbourne. I picked up a detective novel by an author I’d just discovered. But, this was no ordinary detective novel. This was The Daughter of Time by Josephine Tey. Since then, I’ve read the book at least a dozen times, it’s become one of my favourite comfort reads. I’ve gone on to read many other books about Richard III, the Wars of the Roses & medieval history, both fiction & non fiction. I’ve joined the Richard III Society. All this because I read a slim book about a detective, stuck in a hospital bed after injuring his back chasing after a criminal, who relieves his boredom by investigating one of the greatest crimes in history – the murder of the Princes in the Tower.

Inspector Alan Grant features in most of Josephine Tey’s detective novels. He’s a detective in the style of Alleyn & Campion – urbane, civilised, handsome & intelligent. Lying in his hospital bed, bored with the pile of novels given to him by well-meaning friends, he’s visited by Marta Hallard, an actress who became a friend after Grant retrieved her emeralds from a thief.  She brings him a pile of prints, portraits of famous historical figures who were the principals in classic mysteries. Grant can’t do any physical detecting but why shouldn’t he exercise his brain on a classic historical mystery instead? 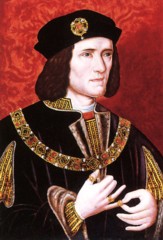 Grant has made a study of faces, becoming an expert at separating the villains from the good guys by the way they look. When he picks up a portrait of a man in 15th century dress, he thinks he must be a great judge or noble because of the expression of nobility & suffering in the man’s face. He is shocked to discover that this is a portrait of Richard III, the wicked uncle of horror stories. The man who not only murdered his nephews but old, mad Henry VI, Henry’s son Edward, poisoned his own wife & scandalously wanted to marry his niece. How could Grant have got it so wrong? He begins by getting hold of Nurse Darroll’s schoolbooks, then Marta gets him a copy of Thomas More's History of Richard III & his colleague, Sergeant Williams, brings him a stodgy history of England & a historical novel about Richard’s mother, the Rose of Raby. Thoroughly confused by now, Marta introduces Grant to Brent Carradine, a young American doing research at the British Museum as a way of staying in England to be with his girlfriend, an actress in Marta’s company. As Brent says when they start the investigation,

Look, Mr Grant, let’s you and I start at the very beginning of this thing. Without history books, or modern versions or anyone’s opinion about anything. Truth isn’t in accounts but in account books.

Brent goes back to the original sources & they discover that most of the stories told about Richard were written to please the Tudor dynasty after Henry Tudor defeated Richard at the Battle of Bosworth in 1485. History is written by the victors & Thomas More’s account of events he was too young to have witnessed influenced Shakespeare who wrote the play that has defined mainstream opinion of Richard as a traitorous hunchbacked murderer of innocents ever since. Grant & Carradine realise that much of the history they learnt at school is just wrong, manipulated by the victors & accepted as fact, which is where Tonypandy comes in.

Tonypandy is a village in Wales where government troops were said to have shot striking miners in 1910. The facts were quite different & Tonypandy becomes shorthand for every falsehood written down in history books & taught in school as gospel truth hundreds of years after the fact. The result of their research is that Grant & Brent conclude that Richard had nothing to do with the Princes’s deaths & that they probably survived him & were murdered by order of Henry VII. Josephine Tey paints such a heroic picture of Richard & such a dastardly one of Henry that thousands of readers have been convinced of Richard’s innocence on the strength of this one book. Many people cite the novel as the beginning of their fascination with Richard & it leads many to join the Richard III Society. 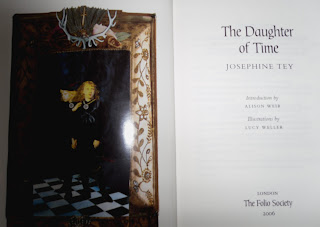 Of course, The Daughter of Time is fiction. It was published in 1952 & research has uncovered a lot more information about the period since then. Vital contemporary sources such as Dominic Mancini’s account of life in London at the crucial period when Richard assumed the throne weren’t discovered until after the book was published. The “white” version of Richard’s story promoted by early Ricardians to counteract the extremely “black” version of More & Shakespeare is just as biased. After reading The Daughter of Time, Richard was my hero. I believed that he was a noble, kind, wise, generous man who would never have killed his own nephews & who only took the throne because he believed he was the only legitimate heir. 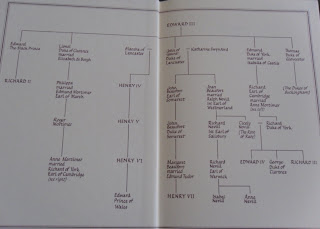 Over the last 30 years, I’ve read dozens of books & articles about Richard & I lean more towards a “grey” version of the legend now. The 15th century was a brutal period when violence was often seen as a solution to a dispute & power was the ultimate goal. Richard was no different & probably no more scrupulous than any other prince of his time. I don’t believe there will ever be a definitive account of the death of the Princes now but the fact that they were never seen alive after about August 1483 (two months after Richard’s accession) is a damning fact that does not go away, no matter how many books I read that paint Richard as more sinned against than sinning.

However, the fact that my feelings about the historical Richard have changed can’t diminish my enjoyment of this wonderful novel. I still read it at least once a year, for the nostalgic picture of London in the 1950s, to read about the excitement of research & to visit Alan Grant in his comfortable hospital bed, eating rissoles & rhubarb, rewriting history in the most entertaining detective novel ever written.
Posted by lyn at 9:17 AM